There’s something bold about a store that only sells one item: $45 cups. But maybe it’s appropriate that such a store occupies the first floor of Jane Jacobs’ home on 555 Hudson Street where she wrote The Death and Life of Great American Cities. I attended the recent “Snapshots in Storefronts” event by the Greenwich Village Society for Historical Preservation (GVSHP) as a volunteer, which allowed me to traverse up and down the stairs of the old home and check out the basement. The 2,144 sq ft building sold in 2009 for $3.3 million, with the option to build an additional 1456 sq ft. The first floor is commercial (in fact, it was a candy store when Jane lived there) but still has a fireplace and mantle. There’s a courtyard in the back and a rooftop garden. 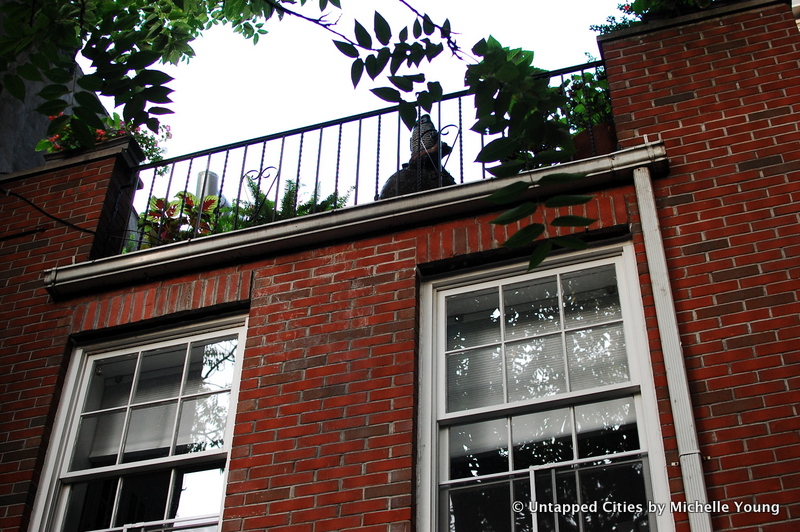 But I was curious about what the building was before Jane Jacobs made it noteworthy. NYC.gov data estimates it was built in 1901. As early as 1922, it was listed in the New York Times as a “three-story brick store and dwelling,” suggesting that it may have been designed for mixed-usage. The building appears to have been part of an estate and passed through a few hands until Jacobs and her husband bought the place in 1947 for $7000. In 1946, it was assessed at $8500 so the Jacobs got a great deal on it! The bricks in the courtyard are imprinted with the name “Shultz,” a brick manufacturer from Kingston, New York that was founded in 1876. The brick factory still exists, albeit abandoned, in the Hudson River Valley. For now, you can check out Jane’s house by visiting Glassybaby, the glass shop on the first floor.