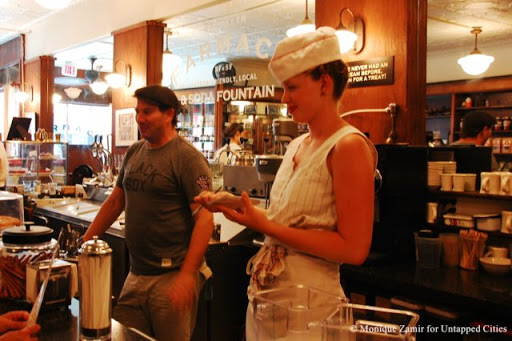 Walking into the Brooklyn Farmacy & Soda Fountain is like stepping into a place you may have only seen in movies. Pass through the door and you’re faced with a bar-style counter with old-fashioned red swivel bar stools. At one end you can find artisinal chocolates, packs of caramel wafers and packs of chewing gum that’ll conjure up nostalgia in many of us. You’ll see a counter-top display case with desserts like a tantalizing blueberry pie, and you’ll see soda jerks dressed for the part with garb from the 1950s serving up delectable sundaes, floats and sodas, among other things. 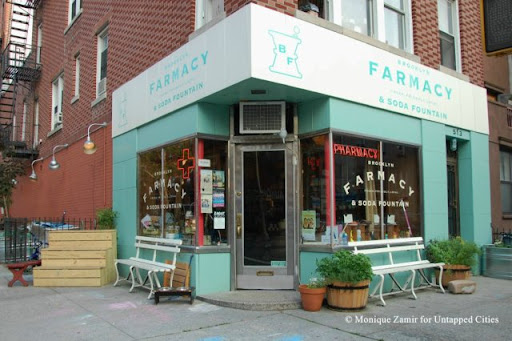 The Brooklyn Farmacy opened in June 2010, but its namesake, derived from independent pharmacies established in the building as far back as the 1880s, lives on within the furnishings. The entire restaurant was designed as a preservation of what had been, acting as the ideal partner of an old-styled soda fountain. Siblings Peter and Gia undertook preservation rather than renovation when creating this place; they utilized century-old cabinetry to showcase artisanal foods and beverages alongside remnant drug and capsule bottles from the pharmacies of yore. Even the flooring goes back to the building’s infancy, inscribed with the name Lonco’s Pharmacy, the first to be established in the building. 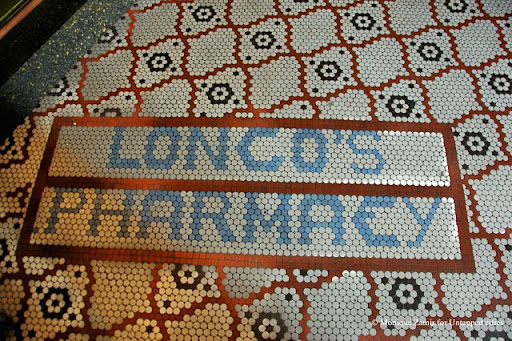 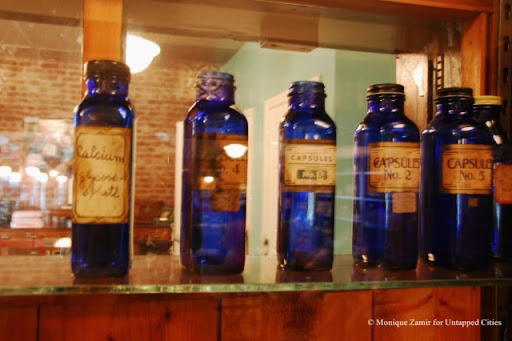 But don’t let the historic appeal fool you, according to Peter, “What makes it so unique and charming is the cross-generational appeal. At any given moment  you could have someone aged 4, 40 and 80.  It’s that kind of cross-generational demographic that makes this an interesting place to spend an afternoon.”

Indeed, I had quite the interesting afternoon there. But rather than elaborate in words, allow me to show you in (tantalizing) pictures! 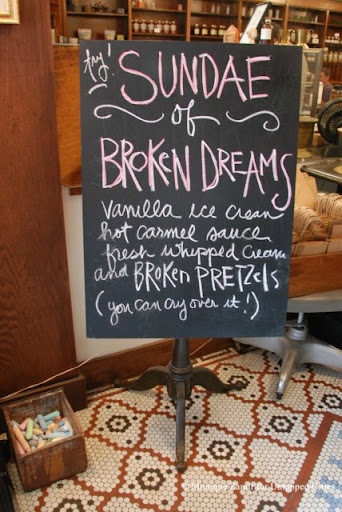 The farmacy is an engaging blend of both local and cultural history with a modern throwback to locally made/grown foods and artisanal products. The soda fountain fits perfectly within Brooklyn’s rich history while simultaneously catering to a multitude of generations and people. 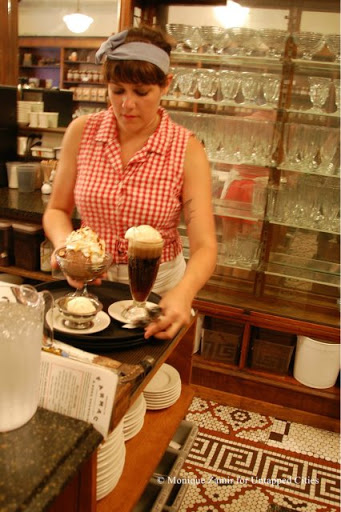 An order of the the sundae of broken dreams, with a customer alteration substituting chocolate ice cream for vanilla. Alongside it is a root beer float. 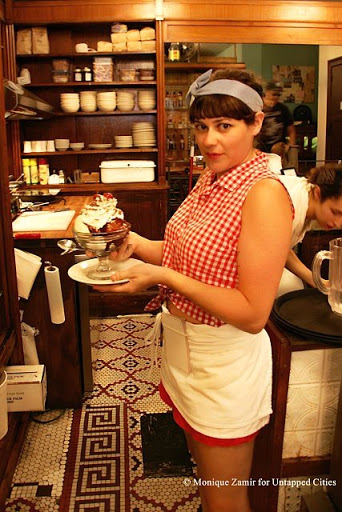 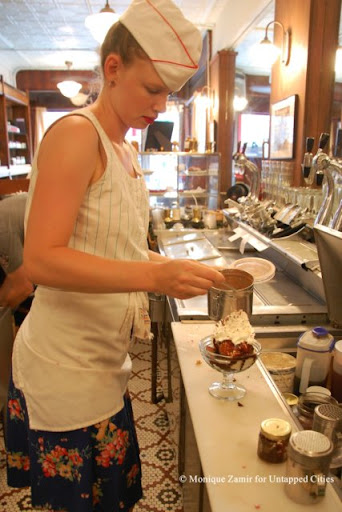 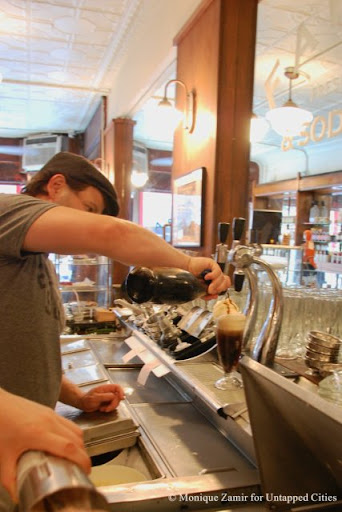 Ice cream sundaes and individually blended sodas aren’t the only thing that this place serves up;  This woman was raving about the Farmacy’s gazpacho: 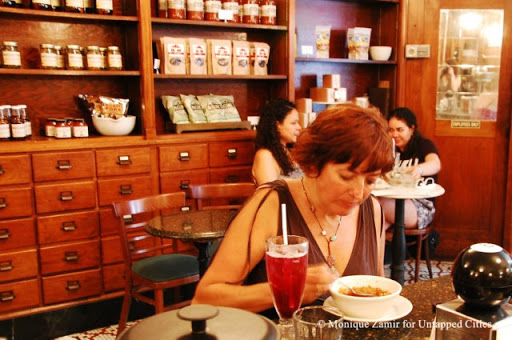 When the Brooklyn Farmacy first got ahold of its abode, the basement was crammed; littered to the brim with wall-to-wall boxes of old pharmaceuticals. Drugs, glass capsule bottles, old Bianca brand breath drops, old bottles of Advil and Old Spice, the shelves covered with old electronics and products you may or may not know the purpose of. Reportedly, they even found opium down there. They cleaned it out so they could put the basement into use, but many things still remain. What they didn’t either give away or display upstairs is lying calmly in the basement, like it has been for decades. They intend to enlist friends to help make it into a museum some day. When I asked about the Bianca breath drops, Peter had no reservations about opening it up and testing it out, and after at least five decades of being packaged, it didn’t taste all that bad. He then gave me free reign to poke around as I pleased, which for me is like telling a kid to grab as many varieties of candy as can be found. 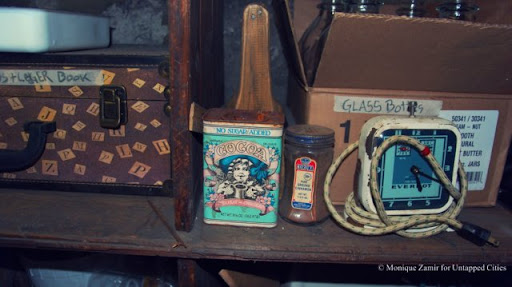 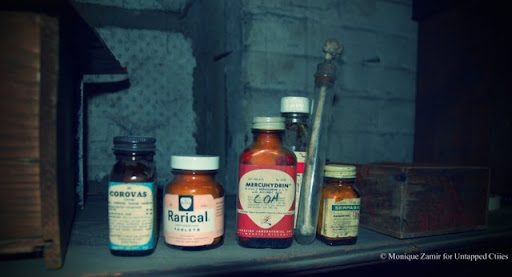 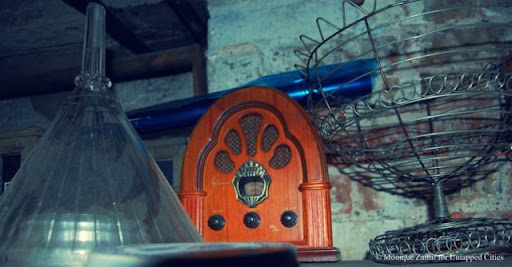 If you were wondering, the image at the top of the article is of the absolutely divine rhapsody in blue: Blueberry soda with Adirondack Creamery’s Black Raspberry ice cream. It’s somehow even better than it sounds.

The Farmacy is located on 513 Henry Street, they serve up delicious egg creams, and if you are in need of more information, check out their blogspot.