In 1868, the New York Life  Insurance  Company relocated its headquarters uptown to a Griffith Thomas designed  Italianate  style building. Its new headquarters was located between Catherine Lane and Leonard Street and took two years to construct. Within the span of a few decades, the building had already outlasted its  usefulness  and a design competition was held to replace the 1868 structure. 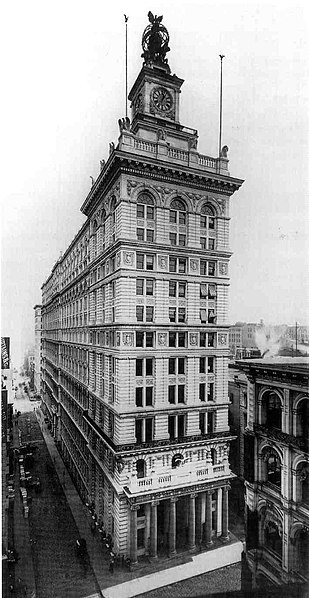 Completed in 1898, the building’s piece de resistance was the thirty-three foot tall, eight ton, sculpture on the top of the building. Philip Martiny, who studied under Augustus Saint-Gaudens, designed the work. The piece consisted of four, 11 foot tall, crouching figures of Atlas, on whose shoulders rested a 15 foot diameter hollow globe, which was topped off with a 7-foot-tall eagle.

The building now appears naked, truncated, and less majestic without its sculptural crown. No one is quite certain what happened to the statue or when exactly it  disappeared. In 1928, New York Life moved its headquarters uptown to Madison Square. When the company moved, the building’s records became less detailed. For years, it was thought that the statue was melted down during the War as scrap metal. However, a photograph has surfaced showing the statue still in its place in 1947. As a result, the prevailing theory is that the statue was taken away sometime in 1948 and possibly resides on a wealthy estate hidden away from the public eye.