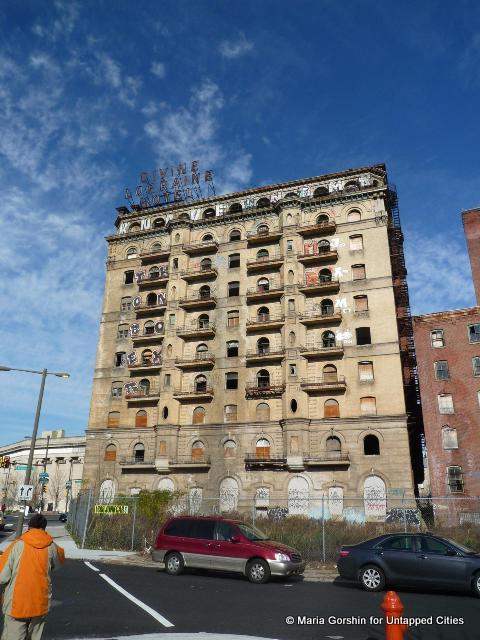 Once you’ve explored Center City in Philadelphia, after you’ve paid homage to the Liberty Bell, run the steps, Rocky Balboa-style, at The Philadelphia Museum of Art, enjoyed a cheesesteak in South Philly and fallen in deep with the City of Brotherly Love from a bench on Rittenhouse Square you realize you want more. With that comes the desire to wander off Philly’s tourism grid to find what else makes the city hum.

One weekday morning I joined a group of Philadelphia history buffs for breakfast at The Lift, a cafe located in an old elevator factory on the edge of North Philadelphia. After an only-in-Philadelphia breakfast of cannoli French toast and much coffee we ventured into the cold to begin a walk into a blighted area of the city where abandoned factories and buildings are being developed into schools, housing, stores and restaurants. About fifteen minutes into the walk I stopped short, in awe of what I saw looming ahead: it was the Divine Lorraine, a 10-story luxury hotel standing broken, in ruin, covered in graffiti and tragically magnificent.

Our group circled the building slowly, some reverently, some giddy from the find, taking photos and sharing bits of Divine Lorraine’s history. This broke-down palace first came into being as the Lorraine Apartments in 1894, one of Philadelphia’s first high-rise luxury residences. It was designed by Willis G. Hale, a controversial architect widely criticized for his unrestrained, high-Victorian style. (Of Hale’s 115 commissioned buildings in Philadelphia only two high-rises survive to the present day — the Lorraine and one referred to as “Philadelphia’s ugliest building” by Hale’s contemporaries.) Despite negative design reviews the Lorraine was a success. In 1900 it was converted into a hotel by the Metropolitan Hotel Company, continuing to attract wealthy clientele for another 50 years. The Lorraine was running as a whites-only hotel in Philadelphia from 1900-1948, during which a cult was growing in Harlem around the charismatic son of two former slaves. Wherever George Baker went to preach his positive thinking sermons, believers flocked and sex and money scandals followed.

By the time he changed his name to Reverend Major Jealous Divine (he took the name Reverend as a signifier of self-respect and Jealous as a reference to scripture calling God “a jealous god”) his preaching had developed into a belief system with a name, the International Peace Mission Movement. He had declared himself God and his notoriety had grown well beyond New York City. In 1944, songwriter Johnny Mercer attended a sermon entitled “You got to accentuate the positive and eliminate the negative” and later credited the sermon as having inspired one of his best-known songs. It was in 1948 that the Lorraine and the Divine linked. That’s when the International Peace Mission Movement bought the hotel for $485,000 — all cash donations from the Reverend’s followers.

Reverend Major Jealous Divine–short, bombastic and flashy–quickly became a hero to black and white families in Philadelphia who struggled with poverty, racism, and drug addiction. His sermons inspired them to find strength and his open-door policy made all feel welcome. He provided his followers with jobs, free food and affordable housing and made sure North Philadelphians always had a place to buy a cheap meal. On the hotels’ top floor, where Philadelphia high society had long gathered for social events, Divine presented free banquets. People from the surrounding community were invited into the grand lobby to buy meals for mere pennies.

By the time he attached his name to the roof-top sign on the building, the Divine Lorraine had become the first racially-integrated hotel in the United States. Later, as North Philadelphia shifted from prosperous to poverty-stricken, Reverend Divine’s building served as a beacon of hope in the area and his sermons began to promote equality, desegregation and anti-lynching legislation. In 1953, Reverend Divine attracted the devotion of one ardent follower willing to donate his $1 million, 73-acre estate to the Mission. Divine lived there, in a 32-room French Gothic manor surrounded by formal gardens, with his second wife, a woman 50 years his junior, until his death in 1965. In 1971, the infamous cult leader Jim Jones, also a follower of Divine’s, tried to take over the movement. When he was unsuccessful he started his own branch of the Mission, the Peoples Temple. That group would eventually commit mass-suicide in Guyana.

So how did the Divine Lorraine fall into such tragic disrepair? By 2000, the 246-room hotel was due for extensive and cost-prohibitive repairs. It was sold to a New York developer but the building sat unused and unrestored for six more years. During that time, David Peace, a member of the International Peace Mission Movement since 1953, lived in the building alone, lovingly tending to it and protecting it from the elements as best he could.

The Divine Lorraine was listed on the National Registry of Historic Places in 2002. In May 2006, Philadelphia developer Michael Treacy, Jr. purchased the building and formed a development team to oversee its use. He assured the historical integrity of the landmark would be preserved and presented plans for 135 condominiums and a restaurant. Instead the interior of the building was scavenged for everything from marble and alabaster to radiators and old mattresses. Afterward, it was left abandoned, windows shattered, the interior exposed to the elements. 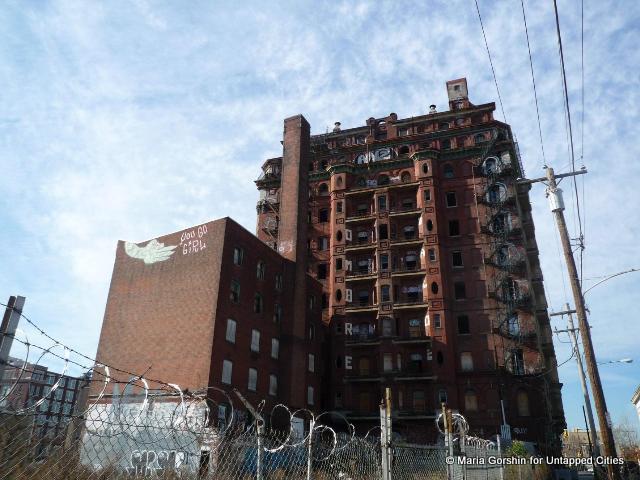 Today, the Divine Lorraine is in shambles. In a sense it’s being demolished slowly via neglect and exposure. It has attracted squatters and been heavily-vandalized. At present, the future of the Divine Lorraine is precarious. Meanwhile, the Reverend Divine’s Mission continues to operate, with faithful but ever diminishing members, out of the grand estate located on a hillside 16 miles from North Philadelphia.