Untapped New York has previously explored art along the 1/2/3, 4/5/6, N/Q/R, and A/C/E subway lines. This week, I tackled the B/D/F/M lines–the only group that travels through the four continguous boroughs, and Arts for Transit has provided compelling art in all of them!

On the mezzanine at Woodhaven Boulevard station in Queens, Pablo Tauler crafted nine metal columns called In Memory of the Lost Battalion (1996). The title references World War I soldiers who died in the bloody Battle of the Argonne Forest, and the beams have a natural, art nouveau style to them that recalls the sylvan landscape. The use of glass and metal both captures and reflects light, and as the harried commuter passes through she is temporarily transported to a natural glen, beautiful yet tragic. Pablo Tauler, In Memory of the Lost Battalion, 1996.

There are four separate pieces at 34th Street — Herald Square station, but I especially appreciated two that are less noticeable. At the north end of the mezzanine Michele Oka Doner replaced the subway tile on one long wall with handmade burnished pottery tiles in varying shades of copper and tan. The wall, called Radiant Site (1991), shimmers with the artificial lighting and converts the usual harsh fluorescent space into an earthy respite. On the north end of the uptown B/D/F/M are tucked David Provan’s kinetic sculptures, called Yab-Yum (1992). This work is provoking for many reasons. On one hand, it is a mesmerizing interactive piece, whose large pinwheeled arms spin in response to the air currents moving throughout the station. Yet, it is a reminder of some of the limitations of public work in the Arts for Transit program–the sculptures are hard to see, tucked into darkness, coated in dust and dirt, and not improved by the dilapidated backdrop. From 34th Street — Herald Square I caught the D train all the way up to 161st Street — Yankee Stadium, and although it was my first time I plan on returning, if only for the subway art! Vito Acconci, an internationally renowned performance and installation artist born in the Bronx, and his studio deconstructed the station with Wall-Slide (2002). Instead of building onto the surface of existing infrastructure, as did Tauler and, discussed later, Mel Chin, Acconci revealed it. Throughout the station he juggled and cut away the tiles to create the effect of looking behind the faÃ§ade to the geological and material underlayer. In the same year, Helene Brandt responded to the Acconci Studio’s work with a witty rejoinder. On the mezzanine level, the fractured walls reveal not rough dark stone, but a Room of Tranquility (2002). The mosaic view is trompe-l’oeil, combining Brandt’s two-dimensional creation of naturalism with Acconci’s pretending to it in three dimensions. Just steps from Yankee Stadium, the humor of an artfully collapsing subway station that falls away to reveal a hidden place of quiet creates some of the most effective public art I’ve seen so far. Back in Manhattan at Broadway-Lafayette Street — Bleecker Street, I was surprised by how much I enjoyed Mel Chin’s Signal (1997). Chin’s evocation of signal fires was created in collaboration with a Seneca tribe member, and in response to the geographical location of the station which was once a major crossroads of Six Nations’ trade. The metal cones enveloping the bottom of central support beams evidence glass holes that glow in response to the coming and going of trains, and blue wall tiles are shaped in stylized representations of smoke. On the uptown 6 side of the station (I’m cheating a bit, but the piece sits above the new under-construction transfer between the B/D/F/M and 6 trains), Leo Villareal has created a light installation called Hive (2012). The LED tubing is shaped to mimic the hexagonal pattern of beehives, yet also references neurological research and theories of mathematics and pattern-recognition. The colors move languidly through the shapes or flash quickly; the entire display is quite mesmerizing. 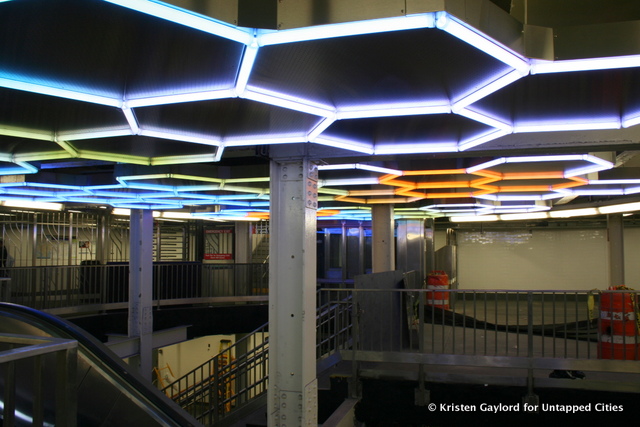 My last B/D/F/M stop was way down in Brooklyn, at Coney Island — Stillwell Avenue. Here, avant-garde choreographer Robert Wilson effectively integrated his knowledge of theatrics into the subway station with My Coney Island Baby (2004). A wall of glass bricks that have images silk-screened onto them creates a large and glowing picture of Coney Island life for both tourists and residents. It sufficiently enticed me: after snapping my photos, I left the station and followed the corridor out to Coney Island. Get in touch with the author @kaygegay.