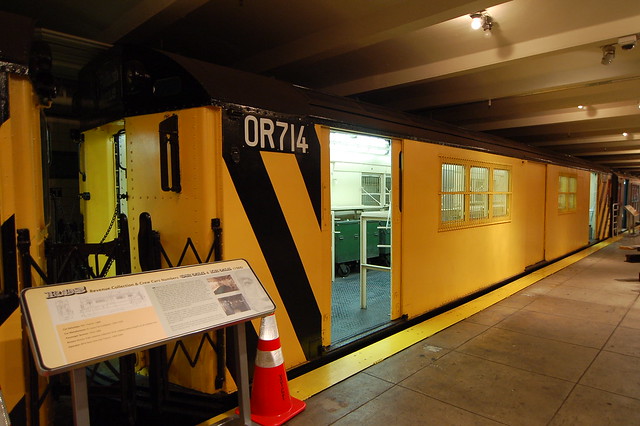 The New York City subway system is one of the largest and most-frequently used urban public transportation systems in the world–and one of the only ones that runs 24/7. The fleet’s 6,311 cars totaled 341.6 million miles last year, carrying over 1.6 billion passengers. While most New Yorkers are intimately familiar with the silver-colored passenger cars, there’s another 350 or so lesser-known cars that make the commutes, errands and excursions possible. While the distinctive yellow-and-black maintenance fleet is easy to spot if you happen to stumble upon one in the station, its appearances in central Manhattan are rare.

Until 2006, the fleet had ten revenue collection cars (fondly known as “money trains“), two-train cars that collected fares from the station booths. Unlike the other cars, they had bars on the windows and travelled with armed guards and an irregular schedule. Seven years ago, these cars were replaced by armored trucks that take the roads instead of the tracks. While most of the subway tracks are underground, the above-ground tracks aren’t impervious to the weather. When a storm approaches, workers spray the subway doors with anti-freeze, remove moisture from brake lines to prevent freezing and attach special rail shoes to trains. When it snows, a fleet of ten snow blowers clear the tracks. They have the ability to throw snow 200 feet and move 3,300 tons an hour. Five de-icer cars clear the tracks of residual ice. One of the biggest questions is how the tracks are cleaned. With 24-hour service, isn’t it hard to send crews onto the tracks to pick up loose papers, cans and other trash? To do so, MTA has two vacuum cars that suck up 70,000 cubic feet of air a minute. At about 224 feet long, each train has one car with a vacuum-blower, two cars that filter and store the trash, and two cars with 475-horsepower engines to run it. These trains can reach speeds of eight miles an hour. A Vakmobile being tested. Photo via Flickr by the Metropolitan Transit Authority

Other cars include signal supply cars that install new track signals, weld cars that transport new rails for installation and ballast regulators that spread ballast (a stabilizer) on the tracks. The yellow and black fleet probably keeps to construction areas and subway yards, but it’s a fun scavenger hunt to try to spot them at central stations during odd hours.