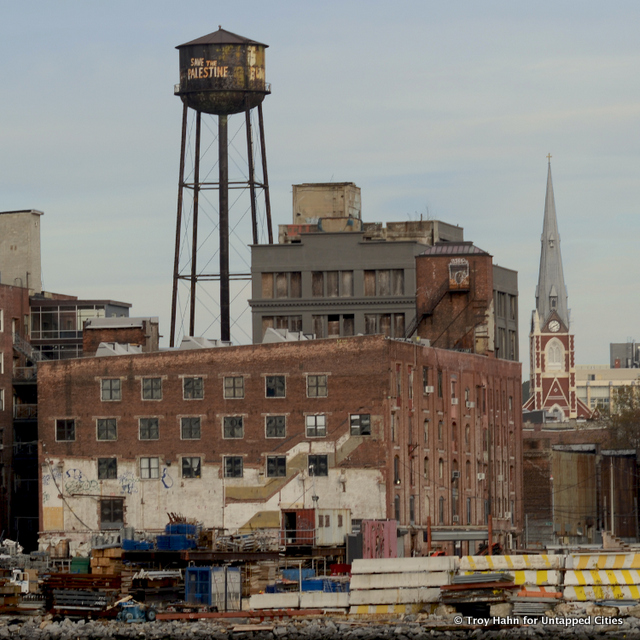 Earlier this week, we published a photo essay about notable spots along the Hudson River in “Thirteen of NYC’s Most Important Architectural Sites on the Hudson River.” The East River, in contrast, is in a different state of development with new sleek skyscrapers abutting both active and abandoned industrial sites. Untapped Cities photographer Troy Hahn went by East River Ferry to photograph these elements on the Brooklyn side, showing how new and old co-exist. Inevitably with the course of development, some industrial elements will be lost but sites along the East River such as Long Island City and the Brooklyn Navy Yard have embraced or built around their historical elements.

The gantry in Long Island City, a neighborhood rapidly modernizing while keeping some of its industrial core: Vintage ad on warehouse in Greenpoint for Huxley Envelope (now United Envelope). The site is vacant: We recently went inside the Domino Sugar Refinery in Williamsburg, here are some details from Troy of the exterior: The Brooklyn Navy Yard, which has transformed from a shipyard into a modern industrial park, supporting businesses ranging from startups to small manufacturing. The Watchtower building next to Brooklyn Bridge Park: Workers on the Manhattan Bridge: The ubiquitous water tower against the New York sky: The East River at sunset: Photography by Troy Hahn. Get in touch with the author @untappedmich.