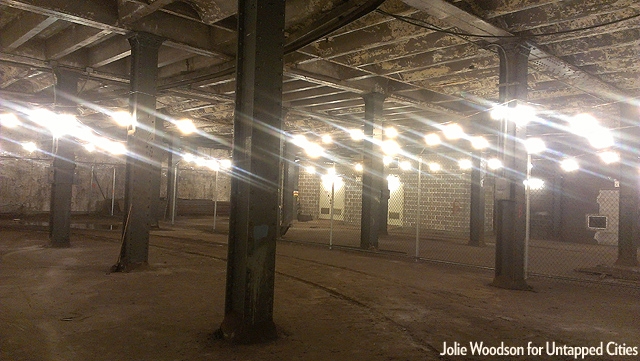 Membership with the New York Transit Museum offers various perks including access to exclusive members only tours and excursions to locations like the abandoned Williamsburg Bridge Railway Terminal. Observant riders of the JMZ lines are likely to have noticed a curious open space alongside the tracks at the Delancey/Essex station, the location for the proposed Lowline park. This dark and seemingly vacant 60,000 square foot lot is a remnant of NYC’s trolley era and dates back to 1903. You’ve probably stood on the active platform adjacent to it dozens of times without even noticing that you were peeking into a living piece of urban history.

The Transit Museum offers an informative tour detailing the history of the station, complete with black and white images to help re-imagine what it once was.  You can envision NYC even before it was the five boroughs and picture the terminal as a bustling transit hub connecting the newly consolidated city (Brooklyn joined in 1898). While the terminal provided an important connection and vastly increased accessibility throughout the city, the trolley system continued to be an unofficial symbol of Brooklyn. So much so that Manhattanites would refer to Brooklynites as “trolley dodgers,” the nickname that later became the Brooklyn Dodgers. The terminal was home to 8 tracks (corresponding to the Williamsburg Bridge‘s 8 lanes) and operated for nearly 50 years. It has remained vacant since 1948, when streetcars went out of style in favor of other modes of transportation. The most interesting part is simply wandering around the dusty terminal, weaving around the steel beams. One doesn’t need to look that closely to immediately notice that the tracks below and the trolley pull system above are all still intact. If the black and white photos didn’t help visitors travel to another time, walking on the dusty cobblestones certainly did. You can even still walk along the curve of the tracks. As you stroll around exploring the space amazed at how it’s been hidden all these years, you can also watch the active subway roll through the other part of the station.

Learn more about the proposed underground Lowline park here and here. While the plans are still in the works, the century-old remnants of a transit age gone by are waiting to be explored.