We’ve presented seven subway stations that have been abandoned in New York City. Here we show platforms and levels in active stations that were abandoned or incomplete, sourced from the extensive research on Joseph Brennan’s Abandoned Stations. 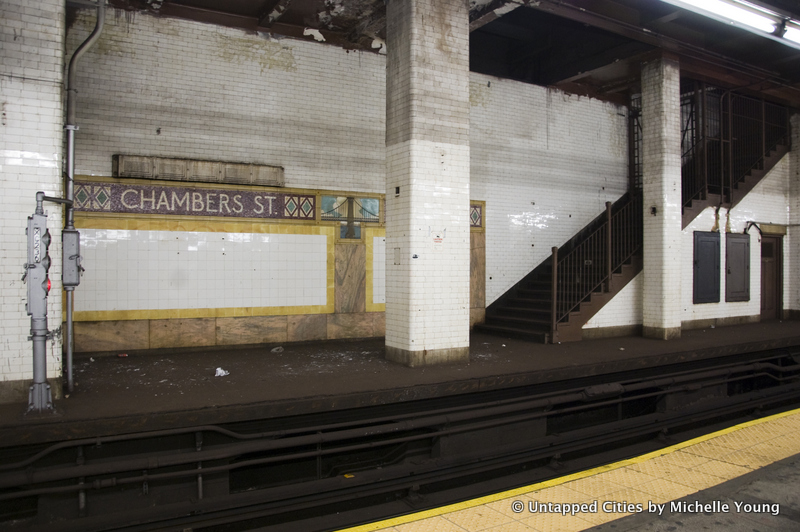 With its historic metal treads still in place (they have been replaced every other New York City subway station), the Bowery station is infamous for the decrepit state of its abandoned section. But lately, it’s been in the news for two very different reasons. First, the abandoned platform was used as a training site for an NYPD terror drill and then a graffiti artist known as “VEW” created a Star Wars-themed “Anti-ISIS” mural.

The station was originally designed with four tracks and two island platforms (meaning each platform was between two tracks). Now, however, the station only has three tracks, since the fourth track, located on the abandoned northbound portion of the station, was removed in 2004 during renovations. Only two of the tracks are actually in use.

Along each side of the Bowery station is a mezzanine. The west mezzanine is closed, and there were escalators running up to the east mezzanine in the original construction. One side of the station even has a raised ceiling where a proposed subway was supposed to run through.

The south end of the station contains newsstands, restrooms, a mezzanine, and stairway-all of which are closed. Another sign of the station’s abandonment is the complete lack of benches on the platforms. 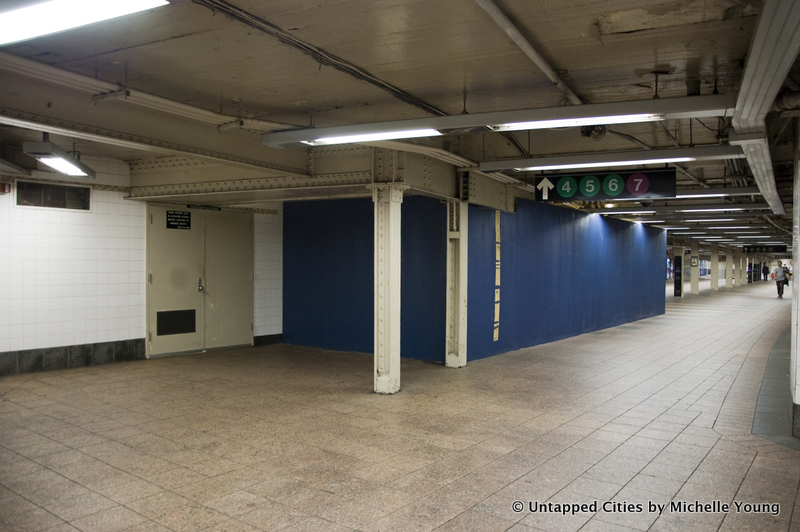 In 1913, the Public Service Commission created an initiative called the Dual System of Rapid Transit which required the IRT and BRT to operate portions of the new system. To fill in a 400 foot gap between the old system and the new at 42nd Street, a subway station was built. According to Brennan of Abandoned Stations, “trackways were built continuing east under 42 St, to bring those two tracks into the new station, which was a narrow island platform between the two tracks. It was expected that two tracks would be more than adequate for the shuttle.”

Demand for the Shuttle was far larger than expected and after a temporary closure, officials hastily finished up the tracks as a walkway between the Shuttle and Grand Central which is still in use today. The shuttle re-opened with three subway tracks.

The columns shown were intended to go down the middle of the station that was never finished. This shot is looking towards the Shuttle: 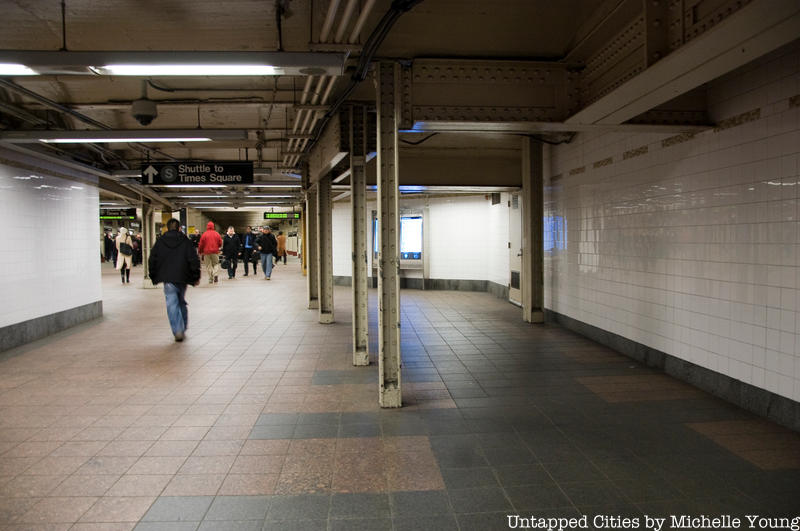 A new office has been been built for the Rapid Transit Operations (RTO)’s Cold Weather Reporting Station. This has further concealed remnants of this old subway platform and track: It’s unclear why the the lower level of the A/C/E track was constructed, as it never operated as part of the IND or IRT systems but it was used between 1959 and 1981 as the origin for the special Aqueduct Racetrack train.

According to NYCSubway, the platform is on the southbound side, “one track, underneath the downtown local track on the upper level, and one side platform underneath the island platform.” The entrances have all been sealed, except for one under a trap door on the “south end of the southbound platform,” at the time Peter Doughtery was writing. Today the tunnels beneath Port Authority are being converted into the 7 line subway extension, of which you can see the progress here in our behind-the-scenes photos of the construction. One platform was closed off to public view in 2001. While most of the wall of the Canal Street subway station on the J/Z line has been redone and patched up, you can spot the old platform through an opening (above). The ornamented railings at the active level of Nevins Street are from the original subway system and lead down to the underpass, which was formerly a platform. The locked doors lead out to the platform, which can also be accessed via the Hoyt Street station (not something we recommend). In 2016, the artist and activist hosted a guerrilla exhibition inside the abandoned level of the Nevins Street station, highlighting mass shootings in America. 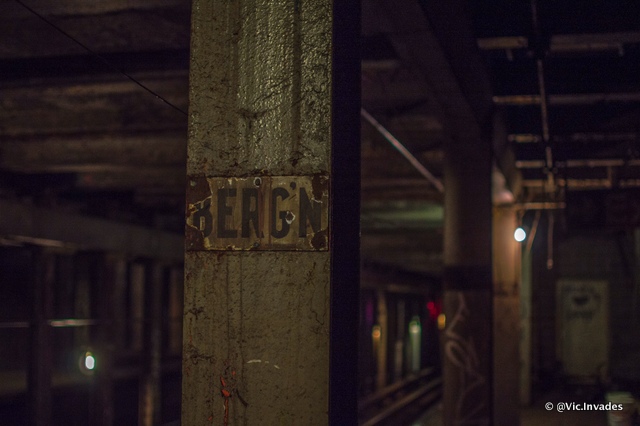 In Brooklyn, an abandoned level below the Bergen Street station is a favorite spot for urban explorers, one of many New York City subway stations that have abandoned platforms. Renovations to the station, which serves the F and G trains, in the early 1990s damaged the lower platform, which had been used from time to time over the course of the station’s existence since 1933. Silver doors on the upper level conceal open staircases that go down to the lower level. For those that frequently pass through the Columbus Circle, you’ll notice that the center platform is now used as a walkway connecting the A/C to the 1 train. Brennan explain its origins:

Express trains [on the IND line] opened doors on both sides in rush hours. On the old subway cars, conductors stood between cars to open doors and could do both sides from the same location. On newer cars, conductors had to open doors from an inside cab, and move to the next car to open the other side, so use of the center platform was discontinued in 1981 because it delayed train service at the busiest time of day.

This portion of the platform isn’t used as the crossover and is devoid of the undulating metal barrier: When the trains are going slowly enough, you’ll notice that the platform of the uptown 6 actually continues beyond an added wall. There, you’ll see green tiling (in the style of the newer Chambers Street tiling above), some ads that were left from when the section was closed off, and a standing pay phone.

In 2012, the Bleecker Street subway station was renovated to create a much-needed transfer from the uptown 6 train to the B/D/F/M trains, as previously transfers were only available to those on the downtown 6. The modification necessitated a shift in the subway platform south, and a northwards extension of the subway platform that was itself added in the 1950s to accommodate the longer 10-car trains closed.

These are just nine examples of abandoned platforms and levels in the NYC subway system, see more at Abandoned Stations. Also see our piece on seven subway stations in NYC that have been abandoned. Get in touch with the author @untappedmich.