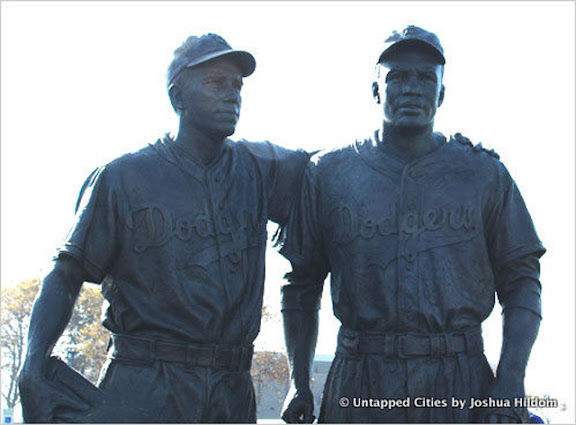 Statue of Jackie Robinson and Pee Wee Reese, outside of MCU Park

Ask any Brooklynite, and they will be glad to tell you: Brooklyn is not Manhattan, but rather a completely different city with a wholly distinct identity. In fact, for seventy-five springs, summers, and early falls, rather than looking north to the Bronx, or east to Queens to get its baseball fix, Brooklyn’s rabid fans of “America’s Pastime” focused their attention on their hometown Dodgers.

The Brooklyn Cyclones, as the first professional baseball franchise in Brooklyn, since the departure of the Dodgers, have taken it upon themselves to adopt the legacy left behind, some fifty plus years ago. Today on Untapped Cities, we look at the remnants of the Dodgers in Brooklyn.

In front of MCU Park, featured prominently, is a statue commemorating the moment when Pee Wee Reese put his arm around Jackie Robinson, in a demonstration of solidarity for his teammate, in the face of racially motivated hostility. This statue has been in the news lately, for all of the wrong reasons, its presence speaks for the tolerance and open-mindedness for which Brooklyn has always been known.

Despite the ugly actions of one or two individuals, the statue was officially rededicated on Monday, prior to the Cyclones’ doubleheader against the Yankees (of Staten Island) and a public screening of the feature film 42, based on the trials and tribulations of Jackie Robinson.

Although the Robinson/Reese statue has become the most well known material legacy of the Dodgers, it is by no means the only remnant of ‘Brooklyn’s Team.’ There are various memorials and place names throughout the borough, which beckon Brooklynites to reflect on the days when the baseball universe found its epicenter in Brooklyn. 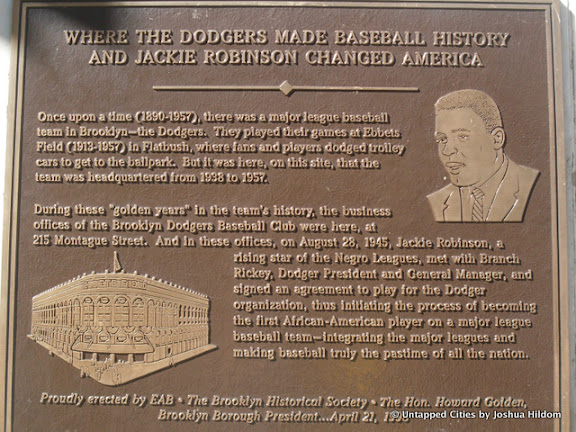 The Dodgers, before the days of Rosa Parks and Martin Luther King Jr., were trailblazers, when it came to desegregation and race relations. The plaque above, at the corner of Court and Montague Streets, the former headquarters of the team (from 1938-57) marks the spot where team President and General Manager Branch Rickey signed Jackie Robinson, making him the first black athlete to sign a contract, to join an all-white professional sports league. 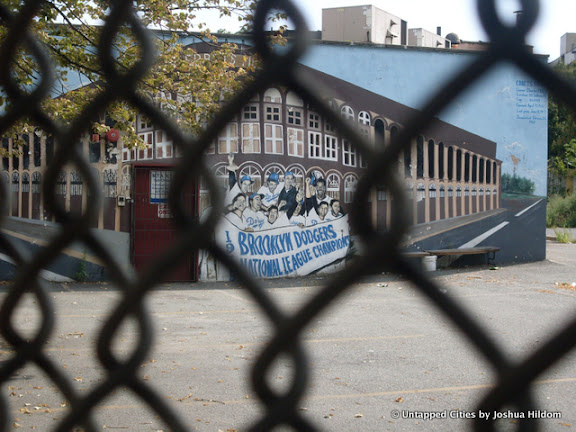 Mural dedicated to the Dodgers’ 1955 World Championship, and Ebbets Field

A few blocks away from the former site of Ebbets Field, which the Dodgers called home from 1913 until 1957, stands this mural. It is a tribute to the 1955 championship team, and to the stadium itself. The location is significant, as it stands adjacent to the Prospect Park station on the Q/B/S line, where many Dodger fans once disembarked, on their way to the stadium.

Here is what remains of the stadium itself: a cornerstone marking the demolition of the ballpark in 1962, to make room for apartment towers, known as Ebbets Field Apartments. Perhaps a microcosm for the time, a small-scale baseball stadium, which fit perfectly into the surrounding residential neighborhood, on a single city block, found itself replaced by a large-scale high-rise development.

Gil Hodges played first base for the Dodgers from 1947 until 1961, before being an inaugural member of the Mets in 1962, managing them to their first World Championship, in 1969. Like many of his teammates, he lived in Brooklyn and was regularly spotted around the borough. As a fixture in the community, an elementary school (P.S. 193), bowling alley, and little league stadium have been named in his honor. Perhaps the greatest honor bestowed upon Hodges, is that the street where he lived with his family, on Bedford Avenue, has been named Gil Hodges Way.

Despite, or perhaps because, the Dodgers left Brooklyn for Los Angeles, unceremoniously after the 1957 season, they have left behind both a void in the community, and an unforgettable legacy.