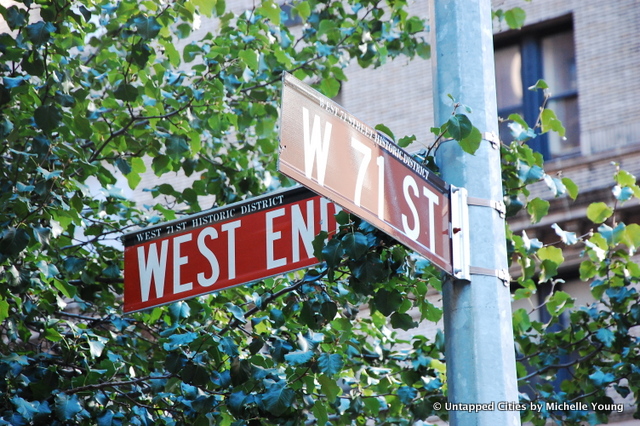 Recently, a reader asked us “Why are some street signs brown?”

Street signage in New York City today is an amalgamation of modern-day standardization and references to historical styles. A few of the signs from the 1960s and 1970s remain, but the majority are the recognizable green and white signs inspired by the color of U.S. highways signs. Any green signs with a Statue of Liberty date from the 1986 anniversary.

The larger blue street signs are a reference to the “humpback” style of signage that date from the 1910s to the 1930s. The brown signage was introduced in 1989 to demarcate historic districts on the 25th anniversary of the Landmarks Law. Only streets within official historic districts can have the brown signage, whose terracotta color was designed to blend nicely with New York’s limestone and brownstone buildings. Sometimes one side of a street can be part of a historic district, while the other is not. This can lead to two sides of the street having different colors signs, like at Henderson Place on the Upper East Side, as we discovered in our exploration of eight of the smallest Historic Districts in Manhattan.

The New York City Department of Transportation offers custom made signs as gifts, and has a nice roundup of historical signs from the 1970s showing different color combinations by borough (blue on white for Queens, white on blue for the Bronx, green on yellow for Staten Island and Manhattan, white on green for Brooklyn).