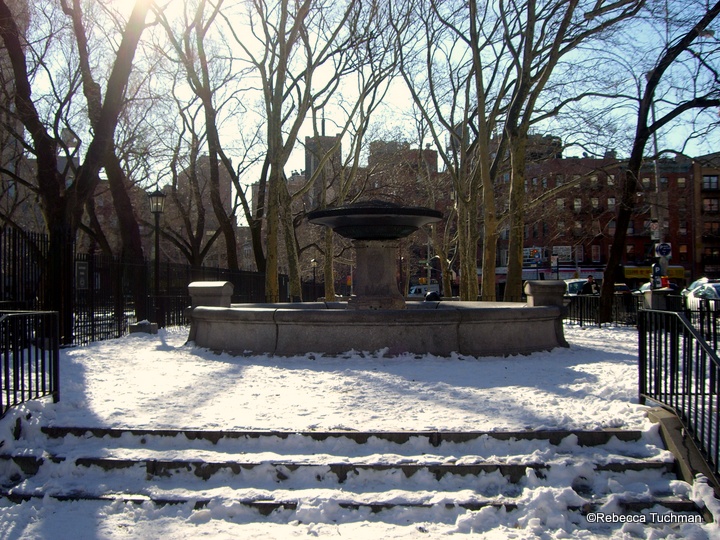 While recent news about the Lower East Side has focused on the redevelopment of the Seward Park Urban Renewal Area (SPURA), a sad forgotten fountain still stands in Seward Park, donated out of pure altruism for the community.

In a bygone era of citizen responsibility, the philanthropist  Jacob Schiff decided to donate a fountain to the people of the Lower East Side in 1894. Schiff (in his own words) wanted to “give to the people who may come to the square the benefit always derived by the tired and overheated from a flow of fresh water.” Schiff hired Arnold Brunner (who also designed the Education Alliance Building on East Broadway, Congregation Shearith Israel on the Upper West Side, Lewisohn Hall at Columbia University, and the former Lewisohn Stadium at CCNY) to design the fountain based upon a sketch which Schiff had drawn.

Schiff stated that “no inscription is intended which shall indicate that the fountain has been erected at my instance… no ulterior purpose is sought, only the benefit of the people of the district in which it is proposed to place the fountain.” Unfortunately, such humility may have led to the problems plaguing the fountain since installation. The only inscription on the fountain is from Exodus XVII:VI and inscribed on the base “and there shall come water out of it that the people may drink.”

The fountain was originally located in Rutgers Square (now Straus Square) and was moved in 1936 to its present location on the western edge of Seward Park abutting Essex Street. Since its dedication, the fountain has been plagued with maintenance  issues. Within two weeks of being operational, the fountain became “plugged up with banana peels, waste paper, and other refuse deposited therein by the gamins of the neighborhood.”

As a result, the Fountain League was formed. The League consisted of 100 boys, over the age of twelve, who wore badges and “pledged… to keep both fountain and square clean.” It was a “formidable undertaking” and President Theodore Roosevelt, of the Police Commission, promised to do all he could to help the boys.

While the fountain has always been a welcome addition to the area, it is currently in desperate need of restoration. Since the 1980s, the fountain has lost its bronze ornamentation and its upper levels. You can help its rehabilitation  by signing this petition from the Friends of Seward Park and hopefully one day the fountain will again regain its former glory.

Read more about the plans for the Seward Park Urban Renewal Area.