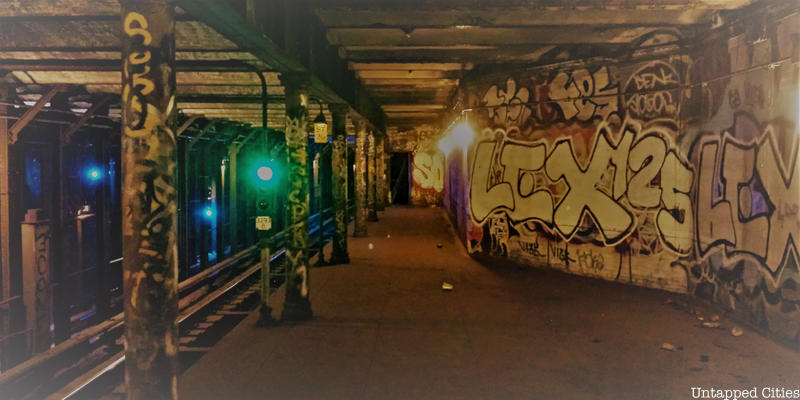 Just a few blocks from the 96th Street subway station along the 1/2/3 lines sits the abandoned 91st Street Station. It was in service since 1904 and was part of the first subway. But with a 200 foot platform, the station was retired in 1959 for similar reasons as the abandoned Worth Street and 18th Street stations. With the extension of neighboring subway stations–96th Street in this case–some stations simply became too close to each other. With one entrance to the 96th Street station just 100 feet from 93rd Street, there wasn’t much use for the 91st Street stop anymore. You can see the station while riding the 1 train (and the 2/3 if no other trains are in the way) between 86th and 96th Streets. But even as far back as 1999, the New York Times reported that “the walls are begrimed with thick 1970’s-style graffiti.” Andre Aciman, author of the article, writes that for in visit the station with Joe Cunningham, an transportation historian, they rode the 1 train and the conductor opened the doors at 91st Street to let just their group of subway-philes out onto the platform.

He writes of what they found in the station:

The platform was filled with trash: broken beams, old cardboard and a litter of foam cups. This wasn’t just the detritus of a subway station, but the leftovers of mole people. There was enough of it to confuse future archeologists, whose job, it suddenly occurred to me, is not only to dig up the past, but also to scrape the rubble of squatters from that of the great civilizations whose abandoned homes squatters made their ow New York City is quite a different place from what it was in 1999 and evidence of habitation has clearly been removed from this station, based on these photos published on Under City Sun in March of this year. Still, graffiti remains hard to tame in this city, tagging or otherwise.

Check out 6 other abandoned subway stations in NYC. Get in touch with the author @untappedmich. All images in this article via UnderCitySun. Read more about abandoned places in NYC.