On a stretch of 125th Street in East Harlem, adrift from new construction and the Harlem restaurant rows, stands a funky four-story building recalling a period when homes were rich in paneling instead of sheetrock, ceilings were ladened with chandeliers instead of recessed lighting, and windows were stained glass, leaded and beveled.  That place is The Demolition Depot. Just a small portion of the room containing lighting fixtures

Located at 216 East 125th Street between Second and Third Avenues, this is a building chock-filled with organized treasurers.  From the minute you step through the door, it’s as if you are transported back in time.  A real ‘Age of Innocence’ setting that will make your checkbook and your imagination run wild.

The second floor devoted to windows of every kind

Evan Blum has been in the business of preserving architectural history at this location since 1996, but he has been salvaging architectural ornaments for over forty years.  As the owner of The Demolition Depot, some of his salvage projects have included the Commodore, Biltmore and Vanderbilt Hotels, the Audubon Ballroom, the Loew’s Delancey Theater, the Helen Hayes Theater, and the New York Life Insurance Building. 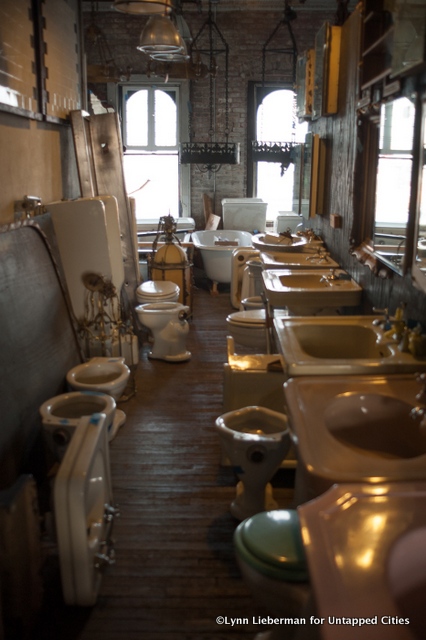 The first floor houses all kinds of light fixtures from chandeliers to candelabra, hardware, and display cases filled with smaller treasurers. The second floor is filled with stained and leaded glass windows, ceilings and doors.  The third floor is dedicated to doors and just a small part of their fireplace mantel collection.  The fourth floor houses plumbing fixtures, mirrors and the balance of their fireplace mantels that had been housed in a building across the street until the City took the building through eminent domain. First floor filled with every manner of lighting fixture

While you are free to roam and enjoy, there are plenty of knowledgeable people to help with any questions, including the history of many of the pieces. You might find a pair of Herter Brother doors that originally came from the Palmer Mansion in Chicago, a German Renaissance fireplace mantel that once belonged to John D. Rockefeller Jr., or a chandelier from Oscar Hammerstein’s office. Each item is tagged with a number used to retrieve a full description and the price.  Motion sensors automatically turn lights on as you enter the various floors and stairwells. You will most likely be greeted by the house cats regally sprawled out on their favorite vintage perches throughout the building. A red SOLD tag today, where there was none yesterday

In addition to their dismantling services, they have a consulting business for any major project you might be dreaming of, and they have a list of trades people skilled at restoring and installing. They ship anywhere in the world and recently shipped an entire antique bar to Germany, light fixtures to Hong Kong and bathroom fixtures to Australia. For those who might find themselves in need of replacement pieces, they are able to replicate almost anything. It was no surprise that they are a frequent stop for movie producers needing specific vintage pieces, like the interior of Baryshnikov’s apartment in Sex and the City, or sets for the CBS Early Show, Good Morning America and The Today Show.  They have even rented out their entire building for photo shoots for Vogue, New York Magazine and various episodes of Law and Order: Criminal Intent. In addition to their main warehouse in Harlem, they have a showroom in Middletown, Connecticut.  You can follow them on their website or on their Facebook page.