It started as an Easter Sunday Church Event in the middle of the 1800s, but the New York City Fifth Avenue Easter Parade has evolved to be one of the most glamorous and over-the-top events of the year. Fifth Avenue is closed to traffic from 47th Street to 57th Street and fashionistas, men & women of every age—and their pets—strut their stuff. As architecture buffs, we were on the lookout for the most unique (and sculptural) outfits!

There were as many photographers and on-lookers as there were people posing for the cameras, and Fifth Avenue had its usual gridlock of people in the blocks close to Saint Patrick’s Cathedral—where there was a line around the Cathedral waiting to get in for the Noon Mass.

We spied everything from homemade costumes and hats that looked like they took all year to create, to some very dapper couples strolling and posing for the cameras in their vintage finest. Some of the costumes were so elaborate, we wondered: Did they come by subway, bus or cab? Some of the incredible hats came with even more startling toppers, ranging from birds to a lizard. 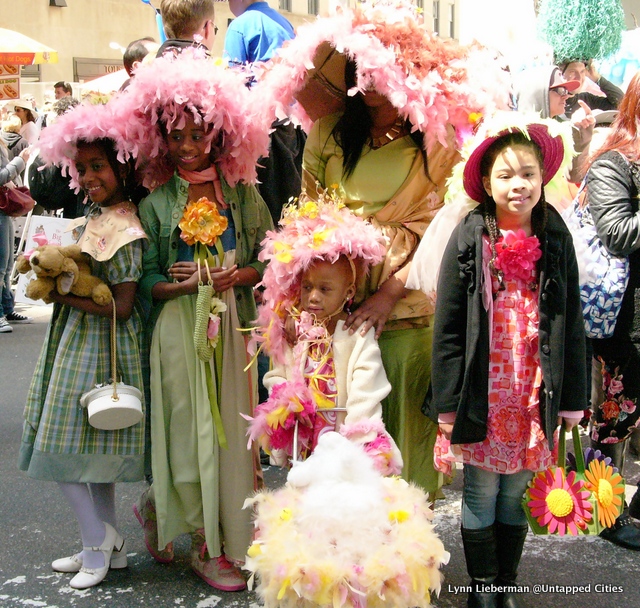 Amazing plumage in this family affair

You may recognize this fellow below.  We often see him around town—dressed exactly the way he is dressed today. Yes, this is the way he dresses every day.