Join Us at Pulqueria, a Hidden Mexican Restaurant in One of the Most Infamous Slums of 19th Century NYC 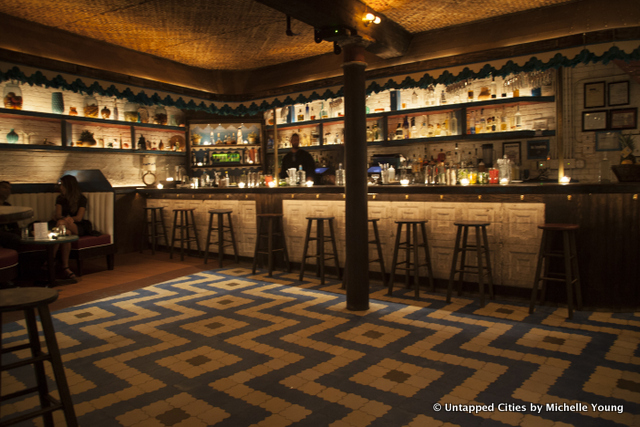 Pulqueria—the hidden Mexican restaurant and speakeasy in the heart of Chinatown—was inspired by ancient Aztec culture and Mexico City’s street markets. It was the first bar in NYC to serve pulque, an alcoholic beverage made from agave leaves. You’ll find Pulqueria’s unmarked entrance in the winding, one-way inner alleys of Chinatown, if you don’t get lost first. Descend the unremarkable steps to the subterranean spot, and you’ll emerge in a dimly lit, atmospheric lounge.

Pulqueria may not have been around during Prohibition, but the area’s scandalous past goes back much farther than that. In the 19th century, the city’s poorest and most hopeless souls lived in horrendous tenements around Five Points. Gangs like the Dead Rabbits (of Gangs of New York fame) ruled the streets, fighting each other over territory and influence.

On top of it all, the area was a rancid, stinking mud pit after the city did a shoddy job of filling in Collect Pond. Even Charles Dickens was horrified by the terrible living conditions. When he visited in 1842, he wrote in his American Notes that the Five Points was “reeking everywhere with dirt and filth,” and declared that “all that is loathsome, drooping and decayed is here.”

We’ll explore the area in our upcoming tour Murder, Scandal & Vice: Crime & Corruption in 19th Century NYC with Boroughs of the Dead. Check out our interview with Andrea Janes of Boroughs of the Dead, who leads walking tours of NYC’s most haunted spots. After the tour, we’ll descend into the depths of Pulqueria for a drink.