On a tour of the Cathedral of St. John the Divine last week with the Museum of the City of New York, looking at the hidden genius of Guastavino’s tiles, we were led into the usually off-limits crypt of the still-unfinished church.

While on the exterior, St. John the Divine shows its unfinished nature through its asymmetrical facade, inside, it’s the crypt that most obviously shows the work that still remains. A Guide to the Cathedral from 1921 posited that it might take 700 years for the Cathedral to be completed, since it was employing true Gothic building methods, but there are no current plans for new construction. 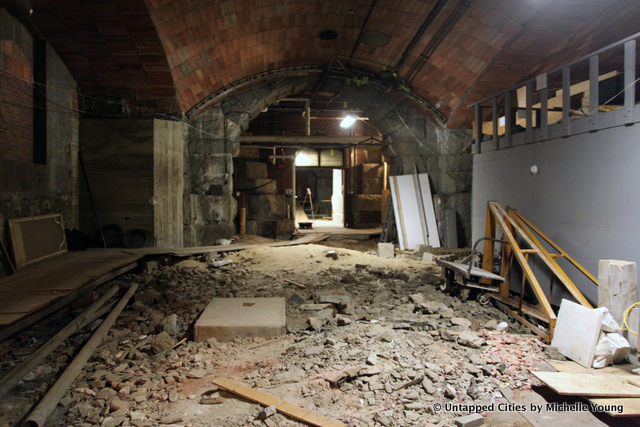 To lay the foundation of the cathedral, the builders had to dig 300 feet down in a project funded by J.P. Morgan. The Guastavinos did the ceiling of the crypt, which is laid out in the shape of a crucifix. Today, that crucifix is truncated due to the unfinished plan.

The walkway of the crypt follows the layout above, with studio spaces named after the chapels above. The studios were closed off during our visit but there were some renderings available. Isadora Wilkenfeld, the coordinator of the Cathedral’s Programming and Communications, tells us:

The Cathedral has had a long history of artists in residence, and a few of the artists have used the spaces you’re referring to in the crypt. Greg Wyatt, the sculptor who created the Peace Fountain on the south west side of the Cathedral Close, used one as his studio. Currently, the Cathedral uses the majority of the space in the crypt for storage, including for art pieces and bequests.

Rendering of St. Martin Studio for the Cathedral School of St. John the Divine: Here are some additional photographs from inside the crypt: Join our Vertical Tour of the Cathedral of St. John the Divine on Saturday, September 27th for an adventurous, behind-the-scenes tour where we’ll be going up to the top (instead of down). Buy tickets below and read more about the tour here.

Read our Top 10 Secrets of St. John the Divine for more fun facts about this enormous cathedral. Get in touch with the author @untappedmich.  See more quirky NYC facts and discoveries in our “Daily What?!” series.