The Underground City Beneath the U.S Capitol and Library of Congress It’s obvious that urbanists have a fascination with the subterranean, whether of the macabre nature like the catacombs of the world, or of the abandoned, or simply being able to eat and drink below the city surface. Sometimes though, we fail to think of underground fascinations of the more mundane kind.

While the freemasons certainly played a role in the construction of Washington D.C., the persisting rumor that the street grid and other buildings are embedded with masonic code is likely myth. Nonetheless, it doesn’t feel surprising that networks of underground tunnels (and even a subway just for those on Capitol Hill) were built beneath the city. More unique than the existence of the tunnels is how they’re programmed. In Washington D.C., they’re like underground cities, with all the things you would need from the outside world, moved indoors. Hallways become streets, marked by the newspaper boxes you would normally find at your corner.

Here’s a roundup of some of the notable underground corridors beneath Capitol Hill: 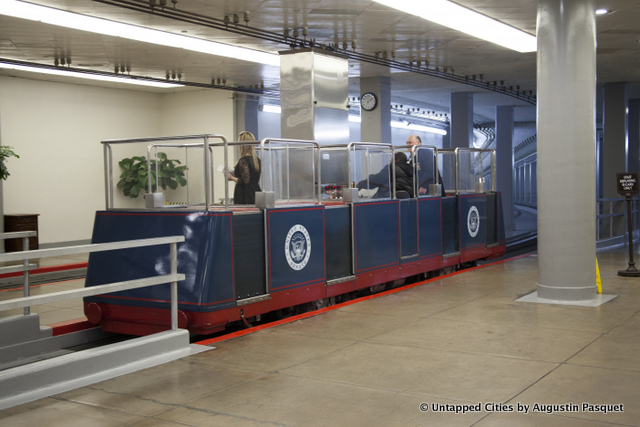 The original line connected the Capitol Building to Russell Senate Office, which is just about 1000 feet apart. Built in 1912, just four years after the launch of the New York City subway, the US Capitol Subway System has been dubbed the “shortest and most exclusive railway in the world,” because it’s only accessible to Congressional members and approved guests. You can also get a ride during an official tour of the Capitol. Monorail cars that were in operation 1915 to 1961, on display in the Russell Senate Office Building. The original coach was of wicker. The Library of Congress is made up of three buildings. The Thomas Jefferson Building is the iconic Neoclassical building with the Grand Hall and domed reading room. But many of the departments and offices are in the adjoining James Madison Memorial Building and John Adams Building, which are connected by tunnels.

The first thing you’ll notice as you make your way into these tunnels is that the agency offices of the Architect of the Capitol are located here–including the mason shop, carpentry shop and machine rooms, where some of the 2,300 employees who maintain the Capitol buildings and ground work. There’s a little bodega in this end, which sells everything from Naked Juices to USB drives: There’s also a clearly delineated division between visitors and workers, as the tunnel is divided into pedestrians and those moving equipment: The tunnel in the cellar of the Thomas Jefferson Building becomes the ground floor of the James Madison Building due to the incline of the land, and here you’ll find an interior Subway and Dunkin Donuts (replete with nondescript bad art on the walls), labeled like they’re offices. Grab a newspaper before hitting up Dunkin’ Donuts: Tunnel to the Adams Building: Paul Ryan in the Cannon Tunnel

The Cannon Tunnel, often traversed by Congressmen and women, connects the Cannon House Office Building with the U.S. Capitol. This tunnel showcases the high school artwork of the annual Congressional Art Competition, which has recognized and encouraged artistic talent in the nation and in each congressional district since 1982. You can also see the winners online here.

Like the tunnels under the Library of Congress, there are lots of amenities along the way including a shoe shine/cobbler, post office, credit union and cafeteria.

There are more tunnels and a veritable maze inside the newer Capitol Visitor Center, where you’ll probably find lost Congressmen and women searching for meeting rooms. So next time you’re in D.C., don’t just stop and stare at the architecture above ground!

Next, discover the original Commissioners’ Map for the New York City street grid, located in the Library of Congress. Get in touch with the author @untappedmich.