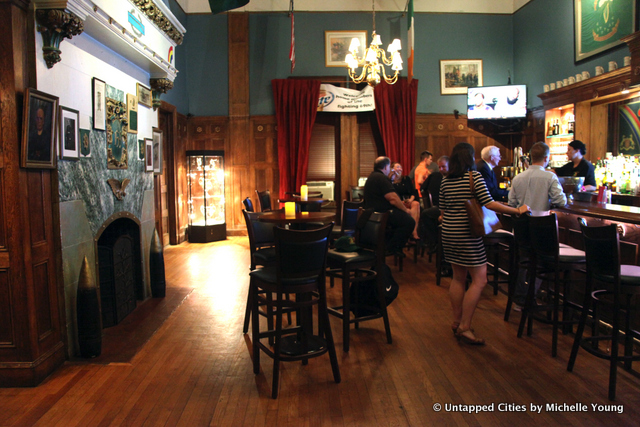 The armories of New York City are a wonderful, active testament of an earlier era–when residents self-started their own militia groups. The 69th Infantry Regiment, known in popular culture as “The Fighting Irish,” was initially an all-Irish brigade founded to train Irish immigrants to free Ireland from British control.

The 69th Infantry Regiment has had an illustrious history fighting in the Civil War, World War I (where the famous New Yorker, Father Duffy joined the regiment), World War II and the Iraq war. Wild Bill Donovan, the WWI Medal of Honor awardee, was also part of the 69th and went on to be in charge of the OSS, a forerunner to the CIA. They were also one of the first responders at Ground Zero, going in against orders.

Their motto is: “Gentle when stroked, fierce when provoked”, in reference to the Irish wolfhounds on their coat of arms. There’s even a James Cagney movie, “The Fighting Irish,” about them.

The regiment’s landmarked armory on Lexington Avenue and 25th Street is still active and you can get in when they open for events or tours. In fact, the 1904 building is landmarked not due to its military history but because the building hosted the first New York City armory show in 1913. The architects of the armory were Hunt & Hunt, who also designed one of the Vanderbilt Marble Twin mansions on Fifth Avenue. The immense arched drill hall has remnants of wonderful wood auditorium seats on the second floor, and now is home to a fleet of humvees. There are also historical artifacts from the regiment’s involvement in various global conflicts in glass cases throughout the entrance hall in and in one of the reception rooms.

But the real hidden gem inside this armory is the Garryowen Club, a bar that began as an officers club but now is welcome to all military personnel and their guests. We were lucky to attend a happy hour held by our partners The New York Adventure Club last week. The wood-paneled bar, named after the regiment’s marching tunes, got its current look around 1962, but existed in an earlier form prior. There’s also a great marble fireplace flanked with some massive artillery. Personalized beer steins line the walls and are flipped upside down for enlistees who are gone. There’s also a relic of the World Trade Center framed in the bar. The best part of a visit here though is talking with those that run the armory and the bar, who will gladly regale you with fascinating stories about the regiment, the armory and the bar. Look out  for the next events at the 69th Regiment so you can get a peek at this remarkable building and bar!

To find out the craziest military story she has heard about the Fighting 69th, get in touch with the author @untappedmich.