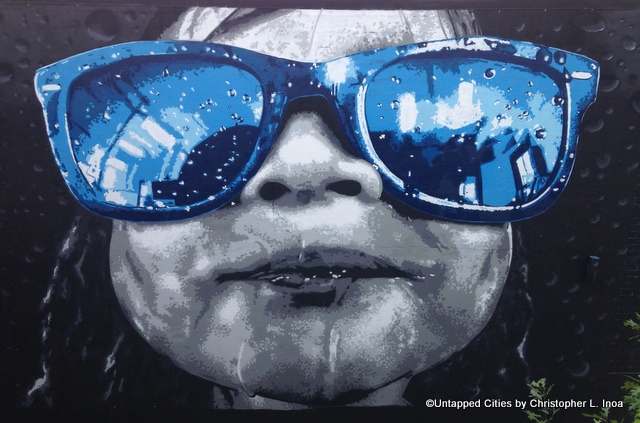 Street art murals are not too common in Inwood, at the northern tip of Manhattan. There is plenty of graffiti, some made by artists who have been painting graff since the 70s. However, street artists have not made it up to the 200s, leaving street art fans and photographers to travel all the way down to SoHo or insert hip Brooklyn neighborhood here to catch street art. However, thanks to the partnership between street artist Damien Mitchell and the WAT-AHH! water brand, the Upper Manhattan neighborhood now has one of the largest and most striking murals in NYC.

WAT-AHH!‘s Taking Back The Streets Campaign aims to bring street art to certain neighborhoods around the country while also promoting healthy drinking for children–a less frightening version of the PSAs you see in the subway. The Campaign has given prominent NYC street artists like Icy & Sot, Fumero, Pose and others opportunities to paint large murals around the country for a good cause. This mural, the company’s second mural in NYC is their largest by far and took street artist Damien Mitchell ten full days to complete.

Using a photograph by Stano Murin during a photo shoot for WAT-AHH!, Mitchell used a mixture of grid work, stenciling, painting and free hand spray painting to complete this giant mural. The company’s previous NYC mural was a 2,500 square foot work by famous artist Kenny Scharf. Mitchell’s mural is 30 feet tall and 60 feet wide. It is a welcome addition to the neighborhood–the bright blue sunglasses can serve as a constant reminder of summer, as fall quickly approaches.