Vintage Photos: The Evolution of Times Square from 1898 to Today Times Square, then Long Acre Square. Photo from Library of Congress, circa 1898-1900.

We’ve been doing a bit of research about Times Square these days, in a forthcoming book about the history of Broadway that we’re working on. The Library of Congress has as great repository of vintage photographs and we’d thought we’d share the striking evolution of Times Square from 1898 to today.

Times Square had its humble beginnings as Long Acre Square prior to 1904. The Astors owned much of the land around Times Square, and the commercial area was also once the site of William H. Vanderbilt’s American Horse Exchange. The top photograph of Broadway and 42nd Street shows billboard posters already plastered over buildings that were still low-rise, stone streets traversed by streetcars, horse drawn carriages and wagons, and a sanitation worker cleaning the gutter. Though the date listed in the Library of Congress photo is 1905, through some group digging on the Facebook group Old Images of New York, we were able to put the date between 1898-1900, the years the Castle Square Opera Company was in operation. The New York Times moved to Long Acre Square on December 31, 1903 celebrating the occasion with fireworks. The narrow building at 42nd Street between Broadway and Seventh Avenue was its headquarters until 1913, when it moved into an annex for more space. Hammerstein’s Olympia Entertainment Complex or Lyric Theatre between 1900 and 1915. Image from Library of Congress.

Low-rise, walk-up buildings still existed in Times Square in 1905. They housed neighborhood businesses like tailors, clothiers and a dentist, as well as services related to horses like carriages shops and stables. The New York branch of Packard Motor Cars, seen in this photograph, was open from 1904 to 1907, after which they moved to 61st Street and Broadway. The Hotel Astor was the first of the hotels to arrive to Times Square, conceived of by William Waldorf as the next iteration of the Waldorf-Astoria Hotel. The French-inspired building had a green copper mansard roof, a Louis XV style Rococo ballroom and a rooftop garden for entertainment, drinking and dining. 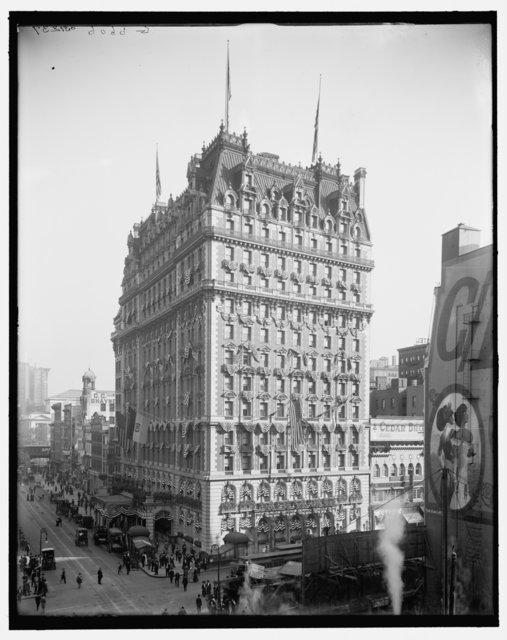 John Jacob Astor IV, a longtime rival of William Waldorf, built the Knickberbocker Hotel in 1906. Known in its heyday as the “42nd Street Club,” The French chateau style hotel also had an entrance directly to the subway platform below that still exists today. The New York Theatre Company building on Broadway between 44th and 45th Street was built by Oscar Hammerstein in 1894, as the Lyric Theatre. Just across from the Hotel Astor, the large building was decorated in a Louis XVI style and  included a roof garden, billiard room, concert hall, music hall and a theater. It has been known also as the Olympia and the Criterion. The site formerly housed the Seventy-first street armory that was lost to fire. It was demolished in 1935. View looking up Broadway from 39th Street to the Times Building and the Hotel Astor, c. 1903-1910. Photo from Library of Congress. View from the Times Building, 1911 including row of motorized taxis. Photo from Library of Congress. Cast-iron subway entrance at the foot of the Times Building, part of the initial rollout of the IRT subway line (c. 1904-1910). Photo from Library of Congress.

1908, crowds gather for a film screening on the Times Building. Photo from Library of Congress. In 1919, a large crowd gathered outside the Times Square to get the results of the World Series from a remote scoreboard. In public domain from New York Times archive via Wikimedia Commons. 1943. Photo from Library of Congress.

The Camel Man advertisement on the Claridge Hotel is one of the most iconic in Times Square. The image would vary during World War II to show men in different branches of the armed services, but always blowing smoke rings. Crowd of people on V-J Day in 1945, after the Japanese surrender. Photo from Library of Congress. In 1961, actresses Millette Alexander and Louise King, and nightclub entertainer Ted Lewis, stand outside a giant mailbox stamp selling booth in Times Square, New York City, while Assistant Postmaster Aquiline F. Weierich dispenses stamps from inside the booth. Camel advertisement, with a football player, is seen in the background. Photo from Library of Congress.

The crime and seediness would only escalate into the 1970s and 80s. In 1973, the Office of Midtown Planning and Development was created by Mayor John Lindsay, and a map of vice was created, locating the massage parlors, spas, “presumed prostitution hotels,” single room occupancy hotels (SRO), peep shows, live burlesque shows, and adult book and video stores in Midtown. 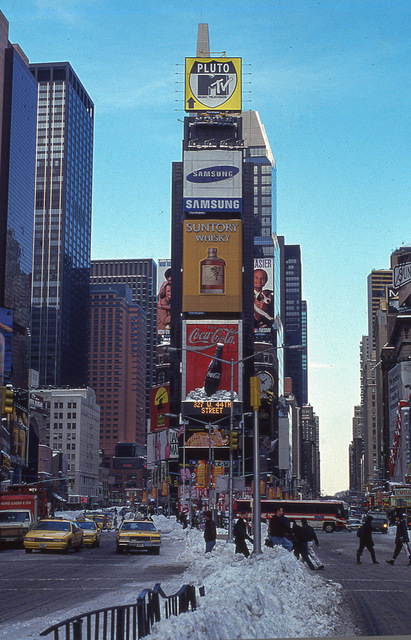 Join us for an upcoming tour of Gritty Old Times Square, led by Robert Brenner, a native New Yorker. Brenner squandered his misspent youth in the fleshpots of Times Square. He witnessed firsthand the demimonde in all their sordid glory. Unlike many of his contemporaries, he lived to tell the tale—and is unashamed: 42nd Street in 1998, at the dawn of Disneyification. Photo by michaelminn.net/newyork. Used with permission. In 1995, Lehman Brothers bought the Times Building for $27.5 million to retrofit as billboard advertising instead of office space. The wildly profitable building was worth $495 million in 2012.

Times Square is undergoing another redesign, which started in 2012 and will conclude in 2016. The $40 million makeover, makes the pedestrianization piloted by Bloomberg’s administration permanent. Changes that can already be seen are the granite pavement blocks.

Read on for the Top 10 Secrets of Times Square.

All photos via Library of Congress unless otherwise noted.

END_OF_DOCUMENT_TOKEN_TO_BE_REPLACED

One thought on “Vintage Photos: The Evolution of Times Square from 1898 to Today”