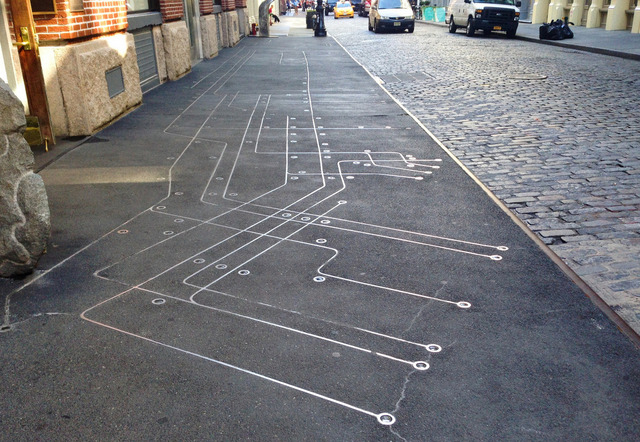 Embedded into the sidewalk in front of 110 Greene Street just south of Prince Street is a floating subway map 90 feet long by 12 feet wide. The work has all the quintessential elements of a New York City artist’s story. An artist begins her career on the streets of Soho. She seeks to install a public art piece (supported by a real-estate developer) but has to get it passed by the community board. Then she is mocked by an officer in the Department of Transportation for her idea, this was the 1980s after all. But in an act of persistence, it gets approved, and the piece of work becomes an award-winning piece beloved by residents.

The piece, in this case, is a floating subway map by Belgian artist Françoise Schein made of stainless steel bars, terrazzo flooring, and glass rounds with lights embedded into the ground, blown by the artist herself. The work, entitled literally Subway Map Floating on a New York City Sidewalk is model of the Manhattan subway map, at least the 156 stops of the system as it was in 1985 when the piece was installed. There are some variations however, as she combined old and new maps to fit the space. Furthermore, Schein says that she just “couldn’t fit Brooklyn and Queens on the sidewalk.”

The work was funded by Tony Goldman of Goldman Properties who said, “the sidewalks are a great canvas to work on.” Predating our society’s current obsession with maps and data, Schein’s work attempts to render the patterns of the modern city in digestible, schematic form. Accessible to anybody, it reveals the subway system on a scale between the real and the miniature of a subway map.

Next, check out the Top 10 Subway Art Installations in NYC.