The Italian neo-Renaissance lobby of the Cunard Building, an interior landmark recently re-opened as an event venue by Cipriani, was designed by architect Benjamin Wistar Morris. This masterpiece features 65-ft high ceilings, soaring marble columns, and magnificent inlaid floors. The grandly presented marine theme of the decor underscores the power and reach of the Cunard Line, as the building opened at a time when New York had recently become the largest city and busiest port in the world. Previously only accessible for special events and film shoots (as seen in The Blacklist), this weekend will be a first in terms of public entry.

The NYC Department of Parks and Recreation has begun exploring options for restoration of Queens’ quirkiest structure, the New York State Pavilion. Most recently, the New York Structural Steel Painting Contractors Association donated their services to re-paint the building’s iconic crown in the original shade of “American Cheese” yellow, brightening the Philip Johnson-designed landmark just in time for the 50th Anniversary of the closing of the fair. Visit during the anniversary celebration, which coincides with OHNY Weekend, for a rare peek inside the gates. Long lines are expected; arrive early!

While checking out the New York State Pavilion, also take in the grounds of the World’s Fair. In the 1930s, nearly 900 acres of central Queens were transformed into a vast showplace of innovation and creativity for the 1939-40 World’s Fair. The site was re-imagined a generation later for the 1964-65 World’s Fair, after which it became Flushing Meadows-Corona Park, the flagship city park of Queens and one of the largest green spaces in the five boroughs. Take a walking tour of this vibrant public space to learn about the remaining landmarks from the World’s Fairs, and the incredible history of one of New York’s most important cultural events. Also open to the public on the site for OHNY will be the Queens Museum, with a scale model of the five boroughs, and the New York Hall of Science. Six historical buildings date back to the time that this site was the location of the U.S. Lighthouse Service, which manufactured all of the items used by lighthouses around the U.S. Visitors during OHNY Weekend will see the “Wall of Lights,” with more than 160 Lighthouse Models; exhibits detailing the history of this site; various Fresnel lenses; an early 20th century lighthouse utility boat; and more. The museum will also offer various arts and crafts activities for children.

Completed in 1812, New York’s City Hall is one of the oldest City Halls in the nation still serving its original purpose, and the third home of New York City’s government. It is a National Historic Landmark and an NYC Landmark, and the rotunda, lit by a central oculus and graced by a “floating” staircase, is an NYC interior landmark. The plaza, rotunda, City Council Chamber, and Governor’s Room will be open. Before you visit, read our guide to the secrets of City Hall so you know what to look for. Visit this legendary private National Arts Club, located in the historic Samuel Tilden Mansion, to explore the front parlors, furnished with intricately carved fireplaces, woodwork, period furniture, and pieces from the permanent collection; the billiards room; and one of New York City’s most stunning bars, featuring a dazzling 19th century stained glass cupola by Donald MacDonald. No pets or children are allowed on the premises. 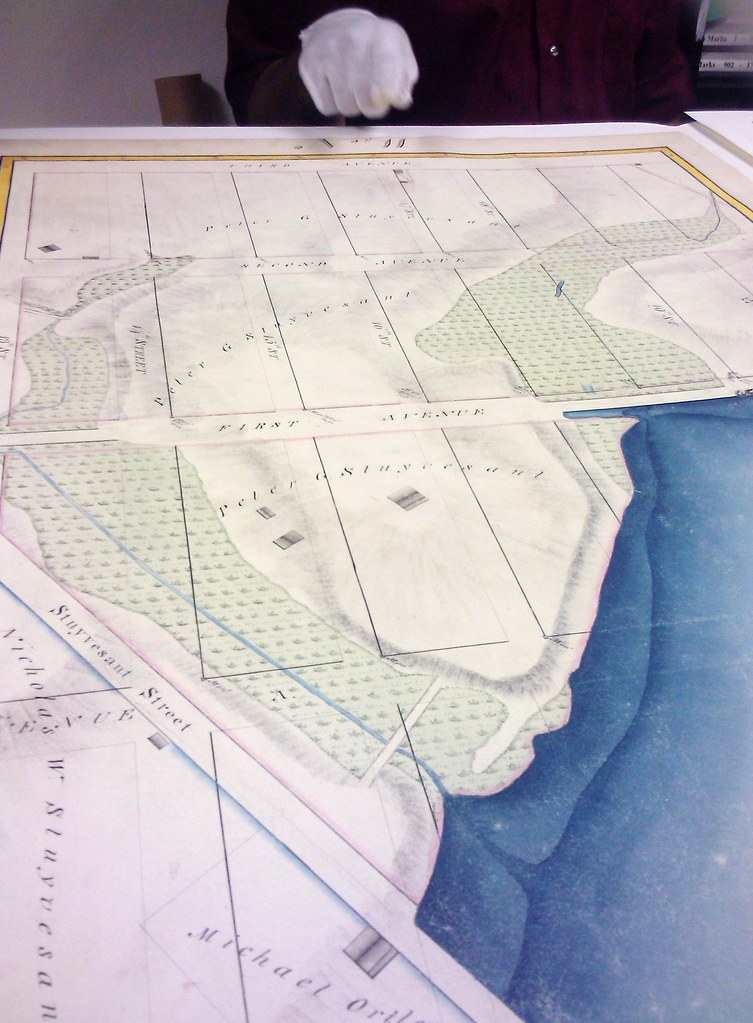 On OHNY Weekend, the Manhattan Borough President’s office will display an historically essential map in the development of Manhattan—executed by John Randel in 1820—that has never been displayed publicly in full (although you can also see it a version by request at the Library of Congress in Washington D.C.). This map is the first that plotted the 1811 “Commissioner’s Plan” which established the Manhattan street grid from Houston St. to 155th. The MBP’s Topographical Bureau is the sole repository for these 92 hand-drawn and hand-colored panels, which will be assembled into a room-size display, allowing map geeks to examine every part of the formative plan that has guided the development of Manhattan over the following 195 years. In 1956 Marcel Breuer was asked to develop a comprehensive design for re-planning the NYU campus at this site. From 1959-1970, five buildings were built based on the design and planning of Breuer and his associates Hamilton Smith and Robert F. Gatje. On OHNY Weekend, take a rare tour of Breuer’s distinctive modern spaces with docents from DOCOMOMO NY Tri-State. Tours will include Begrisch Hall, a highly distinctive building that features a pair of sloping cantilevers that spring from side-wall trusses and appear to defy gravity. These bold sculptural forms reflect specific programmatic requirements, enclosing a pair of steep-floored lecture halls, seating a combined two hundred- and-fifty students.

This brand new building provides state-of-the-art classrooms and a new double-height library in a three-story structure that completes the north side of the Bronx Community College’s main quadrangle. The south facade, facing the quad, is an elegant foil both to the exuberance of the Gould Memorial Library and the severity of Marcel Breuer’s Meister Hall across the lawn. The library’s interior features a double row of barrel vaults supported by slender columns, inspired by Henri Labrouste’s St. Genevieve Library in Paris.

Built in 1894 as Brooklyn’s Fire Department Headquarters, this richly detailed Romanesque Revival structure was recently rehabilitated and converted into housing through a partnership between the Pratt Area Community Council and and MDG Design & Construction in order to restore its historic beauty and give the tenants a building that they can be proud of. On OHNY Weekend, climb the six flights up to the historic crow’s nest to see where Brooklyn’s fire fighters once scanned the horizon for plumes of smoke.

The General Society of Mechanics & Tradesmen of the City of New York was founded in 1785 by the skilled craftsmen of the City. The Society’s soaring, light-filled Library, located on the ground floor of its Midtown building, is the second oldest library in New York City, and one of only three remaining private membership circulating libraries. The building also houses the John M. Mossman Lock Collection, which contains more than 370 locks, keys, and tools, dating from 4,000 BC to the early 20th century. In 1907, City College moved up to this breathtaking Neo-Gothic campus. Built from the Manhattan schist bedrock on which they perch, the buildings are replete with white terra cotta ornament and a rich array of delightful grotesques reflecting the academic disciplines originally housed within. During OHNY Weekend, step inside of the iconic Shepard Hall to explore the soaring Great Hall, a jewel of architect George B. Post’s grand design and one of the largest rooms in all of New York City.

Bullet Space is one of the first legalized squats in New York City. It is community access center for images, words, and sounds of the inner city. Visitors to Bullet Space during OHNY Weekend can learn about the residents’ history as squatters, take a tour of the gallery and garden, view an installation in the building’s basement, and see artifacts discovered in the back yard during a 2010 archaeological dig.