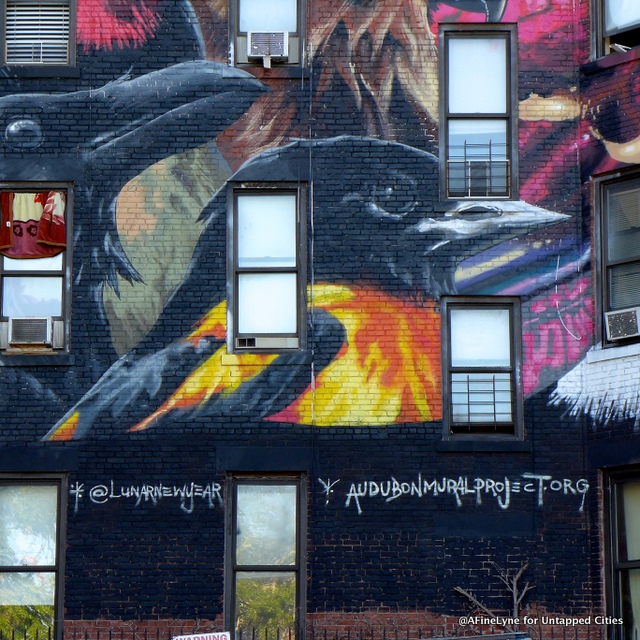 The release of The Audubon Bird and Climate Change Report in October of 2014 did not go un-noticed by those that live in the Audubon Park Historic District and surrounding area. In particular, the owner of Gitler & ___ Gallery, located on Broadway near 150th Street. With the purpose of bringing the current threat to our nations bird population to the public, Avi Gitler teamed up with The National Audubon Society to create The Audubon Mural Project showing the endangered birds.

John James Audubon would be pleased, since he not only spent the last ten years of his life at Minnies Land, located at the foot of 156th Street, but was the first to be buried in Trinity Church’s uptown cemetery – right across the street from the largest of the murals. Mr. Gitler coordinated with local businesses, supporters and artists to paint as many of the 314 endangered images of North American avifauna as possible. Below are just a few of the images that have been completed so far.

Located on the corner of 155th Street and Broadway, the mural named The Swallow-tailed Kite was painted by artist Lunar New Year. In his mural, he hopes to depict the threat of extinction due to climate change. His image is based on the John James Audubon illustration, Swallow-tailed Kite, and his mural overlooks Trinity Cemetery.

Above and below, the mural Wild Turkey painted by artist N. Soala, is based on a short story by Roald Dahl, named The Magic Finger recounting the effect we are having on our planet. The mural, located at 3629 Broadway, sits next door to the gallery that founded The Audubon Mural Project, Gitler & ___ Gallery.

The House Finch, below, painted by artist Mr. Mustart adorns the front of an espresso bar located at 5 Edward M. Morgan Place near 157th Street.

Taylor McKimens painted the mural Rusty Blackbird, which wraps around the corner on 149th Street and Broadway. Continuing on 149th Street, you will find five windows filled with colorful and significant images painted by four different artists.

From right to left, starting with the John James Audubon image created by artist Tom Sanford, next is the image entitled Mallard by artist Graham Preston, then the image Common Loon by artist Kristian Glynn and finally, The Brown Pelican by artist Jason Covert.

Continuing on 149th Street, and part of the same building, The Black-chinned Hummingbird is located in a lower doorway. Artist Ashli Sisk hopes that this image reminds us of the important role hummingbirds play in pollination.

Back onto Broadway, between 149th and 150th Streets, you will find the mural Black Vulture by artist Marthalicia Matarrita, located on a half-gate (above). The Bald Eagle (below) by artist Peter Daverington can be found on the building next door, located at 3623 Broadway.

While we were there, Avi Gitler took us to watch the well-known artist, Andre Trenier, painting his second mural around the corner from his first, on 150th Street and Broadway. When asked how long it might take and he said it had to be done by the time the restaurant opened. He had two hours.

The Tundra Swan (below) is located across the street at 3631 Broadway. The mural is painted by artist Boy Kong, who we know from his work with the L.I.S.A. Project in Little Italy.

This area of Manhattan was named for naturalist John James Audubon (1785-1851), who purchased a thirty acre estate known as Minnies Land in 1841. Audubon spent his life documenting American birds through his illustrations and paintings, depicting birds in their natural habitats. While the estate was sold upon his death, the area was designated a Historic District by the New York City Landmarks Preservation Commission in 2009. The Audubon Plaza cultural complex still houses The Hispanic Society, the Church of Our Lady of Esperanza, and the American Academy and Institute of Arts and Letters, with a number of sculptures on the grounds by Anna Hyatt Huntington.

The Audubon Mural Project continues to add murals. If you are interested in participating or becoming a Supporter, contact Avi Gitler at Gitler & ___ Gallery.

For more on street art, check out the Top 10 NYC Street Art Pieces of the Year so Far, the MonumentArt Project and More. Get in touch with the author at AFineLyne.