What Penn Station could look like in the future according to Governor Cuomo’s plans. There would be no Madison Square Garden Paramount Theater, and instead an 8th avenue grand entrance with concourse, retail and commercial space.

As reported by the New York Times, Governor Andrew Cuomo has revealed more about his ambitious plans to modernize New York City transportation and infrastructure, calling his proposals “the biggest construction program” in New York State history. His plans include new terminals, transit stations and a Hudson River rail tunnel. But one aspect of his plans especially caught the attention of New Yorkers: his renovation visions for Penn Station, called the Empire Station Complex.

Governor Cuomo has projects that would affect Eighth Avenue between 31st and 33rd streets (although we say good luck with relocating the Capuchin Monastery on 31st Street). According to the New York Times, he claimed the state would seek proposals from developers, whose “options would include the creation of a grand glass-walled entrance to Penn Station on Eighth Avenue.”

As a result, this could mean razing the theater that lies below Madison Square Garden, upgrading its shops and even adding entrances along Seventh Avenue or 33rd street. The 33rd street entrance to the Empire Complex Station at night, with proposed skylights

It’s also worth noting what these plans would mean for the James A. McFarley Post Office, the main United States Postal Service building in New York City, which is located on Eighth Avenue between 31st and 33rd streets, right in the center of the area Governor Cuomo wants to change. According to the article, the state will solicit developers to turn the post office into a train station, a large Amtrak waiting room, and shops and offices, a rehash of an earlier redevelopment plan for the station. The McFarley post office redeveloped into an Amtrak train hall, which would be connected to Penn Station via an underground pedestrian concourse. The train hall would be almost the same size as Grand Central Terminal and include retail space, Wi-Fi and digital ticketing, stairs, and “iconic yet energy efficient architectural design.”

The Governor’s Office released more renderings of what Penn Station would look like, shown below. The 33rd street entrance during the day, with natural light pouring into Penn Station Another view of the proposed 33rd street entrance to Penn Station An aerial view of  the Empire Station Complex in completion Before Governor Cuomo’s Wednesday announcement, developers proposed several different plans in a design challenge for a new Penn Station. You can see images from a previous Municipal Art Society competition, that solicited proposals from architecture firms like Diller Scofidio + Renfro, H3 Hardy Architecture, SHoP Architects and SOM to reimagine Penn Station. See more about that here and in the images below. Which vision do you prefer, Cuomo’s or one of the below? 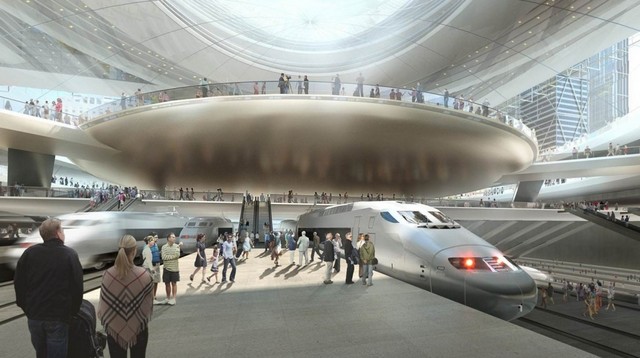 For instance, Vornado and Related, the same developers who transformed the McFarley Post Office building into Moynihan Station, had plans to actually move Madison Square Garden into the post office, allowing for the construction of a glass mall and skyscrapers in its place. However, these plans weren’t executed. ShoP architects’ visions of what Penn Station should look like Governor Cuomo is expected to release a financial plan for the expensive project, which would affect the more than 600,000 daily commuters at Penn Station (more than the three New York City airports combined), at next week’s State of the State speech.

On another note, here’s an image of the original Penn Station, designed by McKim Mead and White, which was demolished in 1963. As Governor Cuomo and the state develops plans, it should be interesting to see how Penn Station and the surrounding area continues evolving from their original states.

The original Penn Station, demolished in 1963. Image via Wikimedia Commons

Join our next tour of the Remnants of Penn Station that addresses the past, present and future of the station on a hunt for architectural pieces of the original building: