Alexander Hamilton is one of our country’s most famous Founding Fathers, undergoing a resurgence of popularity thanks to the Broadway show, Hamilton. He served as the first U.S. Secretary of the Treasury establishing the nation’s financial system. He founded many other institutions such as the Coast Guard, New York Post, and the Federalist Party. He was an American patriot through-and-through, but he was also a New Yorker.

Born on the island of Nevis in the West Indies as a British subject, he immigrated to New York for college, fought in the Revolutionary War beside George Washington, and stayed in New York to help shape the fledgling United States. Here are 10 locations of Hamilton’s New York City.

As King’s College, Columbia University began in the vestry hall at Trinity Church, then moved to a campus near present day City Hall.

At the age of 16, young Alexander Hamilton enrolled in King’s College in 1773, the college that would become Columbia University after the Revolution. Hamilton originally came to America to study at the College of New Jersey (now Princeton) but ultimately chose King’s College because he wanted to finish school on an accelerated schedule the College of New Jersey would not allow. Hamilton left school in 1775 when the Revolutionary War broke out to pursue a career in politics. He never did go back to finish his studies but in 1788 Columbia awarded him an honorary Master’s degree and became a trustee of the college.

Inside today’s Museum of American Finance

In 1784, Hamilton founded the Bank of New York in order to boost the economy following the Revolutionary War. The bank opened with $500,000 in capital and with the title of oldest bank in the United States. Hamilton singlehandedly wrote the bank’s constitution and became one of its leading directors. The Bank of New York opened in the Walton House in Lower Manhattan. Today, it is the location of the Museum of American Finance. A few years later in 1791, he would lay plans for the development of the first Bank of the United States. The intersection of Water and Wall Street, also where the New York slave market was located

These two coffee houses at the intersection of today’s Water and Wall Streets, were important business locations throughout the 18th and 19th centuries. Alexander Hamilton had the founding meeting of the Bank of New York in the Merchants Coffee House in 1784. The New York Manumission Society which worked to abolish slavery in New York State held their second meeting at the Tontine Coffee House where Hamilton was in attendance. The organization was co-founded by Hamilton along with a few other prominent New Yorkers like John Jay.

Located on 54 Pearl Street in Lower Manhattan, Fraunces Tavern was attended by many prominent figures in our history and the spot of many famous meetings, like George Washington’s 1783 farewell to his troops. As a gathering place for patriots into the 19th century, even Hamilton attended meetings and parties here. On July 4th, 1804, Hamilton and Aaron Burr both attended a dinner hosted by the Society of the Cincinnati just one week before the two would have their famous duel.

Since 1904 the tavern has been under the ownership of the Sons of the Revolution in the State of New York. Though the many reconstructions it has undergone have attempted to restore the original edifice, several fires in the 19th century made it impossible to know the original building plan.

In 1800, after retiring from government work, Hamilton decided to purchase land in northern Manhattan. In 1802 he built a house designed by architect John McComb Jr. (the same man who would design Gracie Mansion). Named after his family’s home in Scotland, The Grange was originally located at 287 Convent Avenue between 141st and 142nd Streets with a lovely view of the Hudson, Harlem, and East Rivers. In 2006 it was moved to St. Nichols Park, a few blocks north of the original location. Today the house is the Hamilton Grange National Memorial operated by the National Parks Service. Hamilton and Burr had their infamous stand-off in Weehawken, New Jersey on July 11th, 1804. Although not technically in New York City, after Burr fatally shot Hamilton, he was rushed back onto Manhattan and taken to the Bayard House in the West Village where one day later Hamilton would die. Hamilton and Burr, a Federalist and Republican, respectively, fought for years as political enemies. The battle on July 11th was the final fight to end their personal and political battle. Following Hamilton’s death, Burr was charged with two counts of murder, and after finishing his term as Vice President of the United States, his political career had effectively ended. Weehawken is now home to a Hamilton Park.

For more on the current location of the dueling pistols in NYC, check out our article here.

The fire place which Hamilton died in front of at the Bayard House was eventually moved to Gracie Mansion on the Upper East Side of Manhattan in the current residence of the New York City Mayor. Archibald Gracie, the original owner of Gracie Mansion had a long history with Hamilton as the two were very good friends and business partners. In 1801, Gracie hosted at his house a meeting led by Hamilton which would lead to the founding of the New York Evening Post (today known as the New York Post), one of the oldest newspapers in the country.

For more on Gracie Mansion, read our 10 Secrets of NYC’s Little White House. 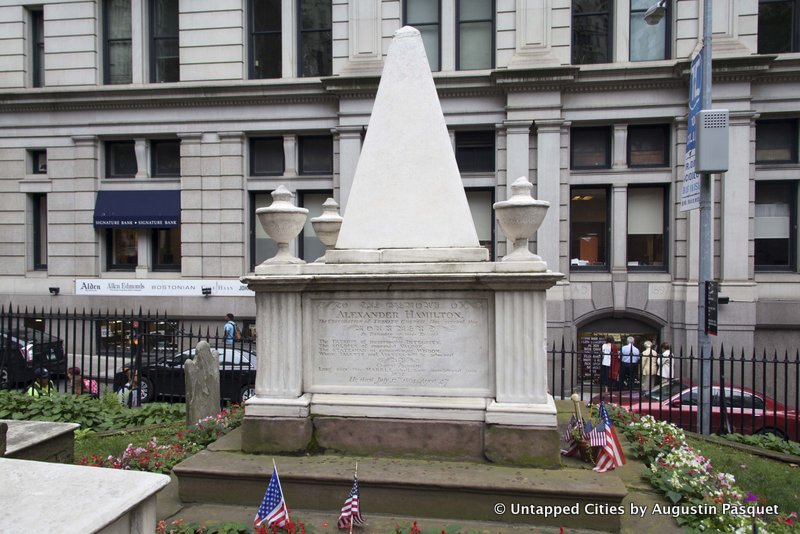 Upon his death, Hamilton was buried in Trinity Church‘s cemetery. When his wife, Elizabeth Schuyler Hamilton died on November 9th, 1854, she too was buried in the same cemetery. The Hamilton’s were also members of the church when they were alive. Their children were baptized there and they held a family pew. According to the church’s records, the sponsors of Hamilton’s children were prominent New Yorker families, like the Schuyler’s, Church’s, and Van Rensselaer’s. Although Hamilton himself is not known to have attended services regularly, his wife was very pious and records indicate she was a communicative of a Reverend at the time. Located in Lower Manhattan, this was the house Thomas Jefferson moved into in 1790 to serve as Secretary of State for George Washington. It was in this house that Jefferson, Hamilton, and Madison had a “dinner table bargain” in which the Compromise of 1790 was made to move to country’s capital down to Washington D.C.

Read more about this historic street in History of Streets: Maiden Lane

The Federal Hall currently at 26 Wall Street is not the original building. It was razed in 1812 after the capital of the United States was moved to Philadelphia in 1790. The original building, called New York City Hall back then, holds a notable place in the history of our country. It hosted the Stamp Act Congress in 1765 to protest “taxation without representation.” After the Revolution, it was the meeting spot for the Continental Congress, and where they adopted the Northwest Ordinance in 1787. Although Alexander Hamilton has no direct history with the building that we know of, he did live in the same neighborhood, making City Hall a part of his stomping grounds. Hamilton’s Wall Street home had a view of the building where he would have seen George Washington’s presidential inauguration on April 30th, 1789. On Central Park‘s East Drive at 83rd Street, close to the Metropolitan Museum of Art, is a statue of Alexander Hamilton sculpted by Carl H. Conrads and donated by the grandson of Hamilton himself in 1880

Next, check out New York City’ Presidential Haunts from Washington to Lincoln.