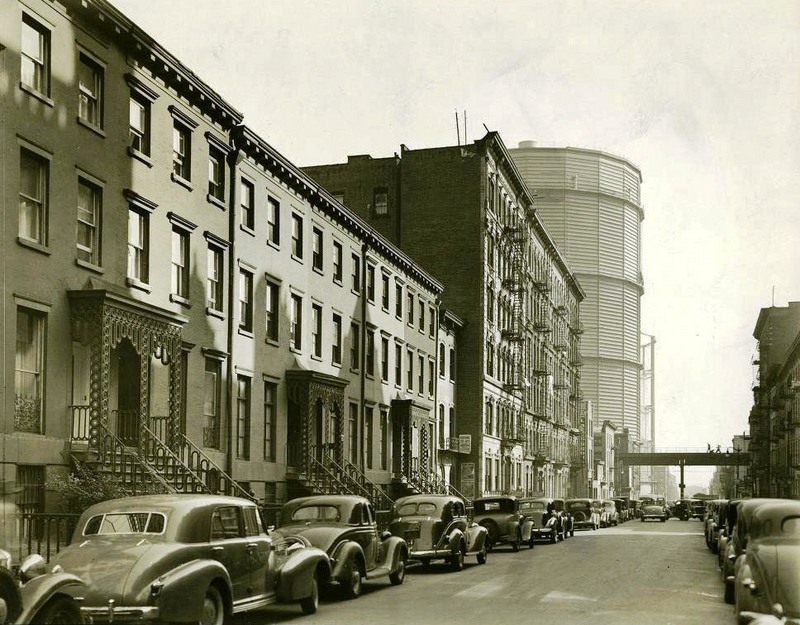 Before the housing complex we’re familiar with in Stuyvesant Town was built, the area was formerly known as the Gas House District, named because of the two giant, circular gas storage tanks, or “gashouses” that once existed there. In the late 19th and early 20th century, the Gas House District was a cheap place to live. With tenement prices low, it was a magnet for poor immigrants coming in from Ireland in the mid-19th century, and then Germans, Eastern Europeans, Italians and Armenians by the 1920s.

The area was poor, and much like other sections of the city where immigrants lived, the conditions were squalid. The area smelled bad because of frequent gas leaks and had a very high crime rate due to the presence of the “Gas House Gang.” The gang reportedly committed 30 holdups every night on 18th Street alone. Living near the gas tanks also had its share of dangers. In 1898, one collapsed, killing three and severely injuring 13.  Needless to say, this was not an ideal place to live, still it was all some could afford.

By the 1930s it was clear some change was in order. The gas storage tanks had been dismantled, and the development of the FDR Drive on the East River opened up the streets. Soon, following the end of World War II, there was a desperate need for housing. Enter the Metropolitan Life Insurance Company. The company purchased and set up Stuyvesant Town-Peter Cooper Village, the private residential development known today as “Stuy Town.” In 2015, MetLife sold the complex to the Blackstone Group, a Wall Street Investment firm, for $5.3 billion. When word got out that the area was up for sale, many residents feared eviction and worried about increasing rent prices. But as the sale concluded, Blackstone Group made a deal with Mayor Bill de Blasio to keep 5,000 units within financial reach for the city’s working people.

Next, check out NYC Then & Now: From Pushcarts to Trendy Boutiques on the Lower East Side.