The East Village has a rich history, and the remnants that still persist from the different immigrant groups who made this Manhattan neighborhood their home help the area keep its cool amidst rapid development. In the earliest days, Dutch settlers dominated the East Village, while German immigrants moved into the neighborhood later on. Later, it was a hot spot for the mafia during the era Prohibition era. The East Village then saw its fair share of artists and beatnik poets, like Allen Ginsberg, Patti Smith and more.

Discover the secrets of the East Village that reveal the depth of the neighborhood’s history.

On the surface, the William Barnacle Tavern seems to be nothing more than a classic dive bar that happens to also specializes in absinthe. But the tavern, home to the theater 80 St. Marks and the Museum of the American Gangster next door, was a Prohibition-era speakeasy in the 1920s. In fact, the bar is half of the original horseshoe bar that dates back to Prohibition.

Today, you can still visit the tunnels that the mafia would use to transport alcohol and other illicit items into and out of the speakeasy – and the one used by mobster Walter Scheib when he tried to make his escape. The speakeasy was sold in 1964 to Lorcan Otway and his father, who discovered $2 million in unopened safes in the basement while building the theater.

11. The Cooper Union Building in the East Village Was the First in the World to Have an Elevator Shaft The Cooper Union for the Advancement of Science and Art was founded and established in 1859 by American Industrialist, Peter Cooper. Cooper believed that the elevator would be invented as the Cooper Union was being built, so he included an elevator shaft in the design of the building in 1853. Cooper said that if the passenger elevator had not been invented by the time the building was completed, he would build one himself. However, the modern elevator would not be invented until four years after the building was finished.

10. There is a Beach House on Top of an East Village Building Passersby will encounter a strange sight while looking up on the intersection of East 1st Street and First Avenue: an East Coast beach house perched on top of a building. Though it is unknown how the rooftop beach house got there, there are other houses on top of apartment buildings in the East Village and around the city, like the cottage on the corner of 13th Street and Third Avenue. The interior of the building is fully furnished, equipped with three bedrooms and bathrooms, two fireplaces and private terraces.

9. The Frank Lloyd Wright Towers in the East Village That Were Never Built The first all-glass towers in New York City were the United Nations Building and the Lever House, both completed in 1952. However, these were not the first plans for all-glass towers in the city. In 1927, prolific architect Frank Lloyd Wright, conceptualized three to four all-glass towers to be built at 11th Street and 2nd Avenue. Reverend William Norman Guthrie of St. Mark’s Church on-the-Bowery commissioned Wright to build the apartment towers to provide funds for the church’s maintenance. But Wright’s investors were apprehensive about his revolutionary design and refused to back the project.

8. There’s a Statue of Vladimir Lenin Atop a Building in the East Village

Overlooking East Houston Street between Avenues A and B is a seemingly out-of-place statue of Vladimir Lenin, that we previously wrote about at Untapped Cities. The statue stands at 18 feet tall on the top of a building known as the Red Square. The sculpture was a Soviet-commissioned project created by artist Yuri Gerasimov. Following the fall of the Soviet Union, the statue did not have the opportunity to be displayed. In 1994, Red Square developers Michael Rosen and Michael Shaoul found the statue in a backyard in Moscow and decided to make it a display piece for their new building. The statue itself is not an homage to the Communist leader, but is a reference to socialist history in the East Village and Lower East Side.

[Update: The Lenin Statue was moved to the Lower East Side in 2017].

7. Stuyvesant Street in the East Village is the Only True East-West Street in Manhattan 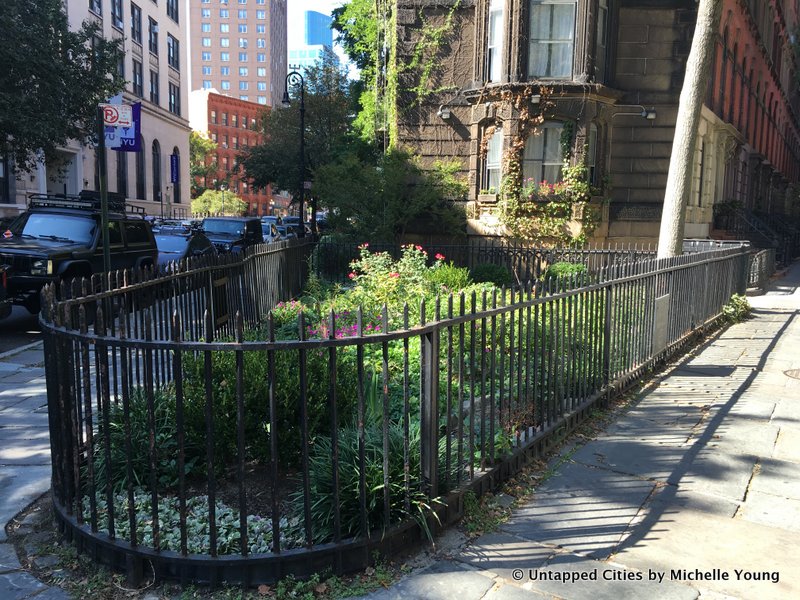 Stuyvesant Street, which crosses East 9th Street between Second and Third Avenues, breaks the traditional grid system for which Manhattan is known. Aside from Broadway, it is the only diagonal street in Manhattan north of 8th Street and south of Central Park. Stuyvesant Street was named after Peter “Petrus” Stuyvesant, the Dutch Director-General of New Amsterdam from 1647 to 1664 when it was ceded to the English and renamed “New York.”

During Stuyvesant’s lifetime, his family owned much of what is today known as the East Village. Stuyvesant’s grandson, Petrus Stuyvesant III created a grid system for New York that was aligned by magnetic north. Later on, the Commissioner’s Plan of 1811 laid out another grid plan for the city streets that was not as faithful to the compass as Petrus III’s plan.

Stuyvesant Street, a narrow line that led from Bowery Road to Stuyvesant’s mansion remained because it was a well-trafficked road. To this day, Stuyvesant Street is the only true compass-tested east-west street in Manhattan. The New York Marble Cemetery, the oldest, public nonsectarian cemetery was founded in 1830 in the East Village. In the 19th century, marble was used to prevent the spread of disease in the Second Avenue Cemetery, as it is also known. Because it’s only open in warm weather on certain weekend days of the year, it has remained fairly “untapped” over the years. According to the New York Marble Cemetery website there were 2080 interments between 1830 and 1870. The last interment was in 1937.

In 1831, the 5th President of the United States, James Monroe, was buried at the Marble Cemetery, before ultimately being laid to rest in Hollywood Cemetery in Richmond, Virginia.

5. A Nondescript Building Conceals One of East Village’s Hidden Gems The Village East Cinema originated as a Yiddish Arts Theater designed by Brooklyn lawyer and Jewish community leader Louis Jaffe in the 1920s. The theater had the capability to seat 1265 people and features intricate designs and architecture in its interior. There is a decorative ceiling featuring Jewish religious symbolism, including the Star of David above an elaborate chandelier. The theater is popular for hosting independent movies, and showed the original productions of ‘Grease’ and ‘Joseph and the Technicolor Dreamcoat,’ and midnight showings of the ‘Rocky Horror Picture Show.’

4. There Was Once a German American Shooting Society Headquartered in the East Village

German immigrants made up a large portion of New York City’s population during the 19th and 20th centuries. During this time, there were nearly 250,000 Germans living in the historical Kleindeutschland neighborhood, or “Little Germany.” According to the Lower East Side Preservation Initiative, Germans comprised 30 percent of New York’s population by 1870. Though little remains of the old neighborhood, a sign on 12 St. Marks Place that reads “Einigkeit Macht Stark,” or “Unity provides strength,” serves as a reminder of The German American Shooting Society. The building was built from 1888 to 1889 by architect William C. Frohne for the Deutsche-Amerikanische Schützen Gesellschaft, which was founded in 1857 and was 1,400 members strong by the late 1880s. The society is now known as New York Schuetzen Corps Inc., and its former location is a yoga studio.

3. The Merchant’s House Museum Has Over 2,500 Objects from the Tredwell Family’s Possessions

The Merchant’s House Museum was built in 1832 and was purchased by wealthy merchant Seabury Tredwell, after working 32 years in the hardware business. Tredwell lived in his East 4th Street home until his death in 1865, and three of his children, Phebe, Julia and Gertrude continued to live in their family home. Gertrude was the last of the Tredwells to live in the Old Merchant’s House, dying in an upstairs bedroom at the age of 93. The house was converted into a museum in 1936. Information about tours of the Museum can be found here.

2. The East Village’s Tompkins Square Park Was the Site of Two Notable Riots A depression hit cities in Europe and North America and led to the financial crisis known as the Panic of 1873. During this time, there were a number of groups and workers movements throughout the United States that fought for the fair treatment of workers and to provide jobs to the unemployed through public service projects. One such group was the The Committee of Safety in New York, formed in December of 1873. After being refused a meeting with city officials, the committee planned to hold a demonstration in Tompkins Square Park on January 13, 1874.

On the day of the demonstration, 7,000 workers gathered in the park, staging the largest demonstration that New York City had seen. 1600 policemen were stationed in the area, and attacked the workers with clubs and using other means of brutal force. 46 arrests were made and each individual’s bail was set at $1000.

Tompkins Square Park became the site of another notable riot in 1988, when the police enforced a 1 am curfew for the park in an effort to deter drug pushers, the homeless and young skinheads from causing trouble late at night. The park had previously been opened 24 hours, and some residents saw the curfew as the police taking the park away from the public. A rally was held on July 31, 1988 and another for August 6. There were 100 reports of police brutality, and it was revealed that the NYPD was responsible for inciting the riot.

1. The Stuyvesant Family Vault Is Beneath St. Mark’s Church in the Bowery

At 131 East 10th Street is St. Mark’s Church in-the-Bowery, the second oldest church in Manhattan and the oldest site of continuous religious practice in New York. The title of oldest church in Manhattan belongs to St. Paul’s Chapel of  Trinity Church. The church is built atop the tomb of Peter Stuyvesant, the governor of New Amsterdam and a notable figure in the early history of New York City. Stuyvesant died in 1672 and was buried in the family vault under the east wall. As Forgotten NY notes, the vault was closed permanently upon the last family burial there in 1953.

Next, read about Tracing the Patti Smith Trail in NYC from Tompkins Square Park to CBGB. Connect with the author @jen_bagcal.