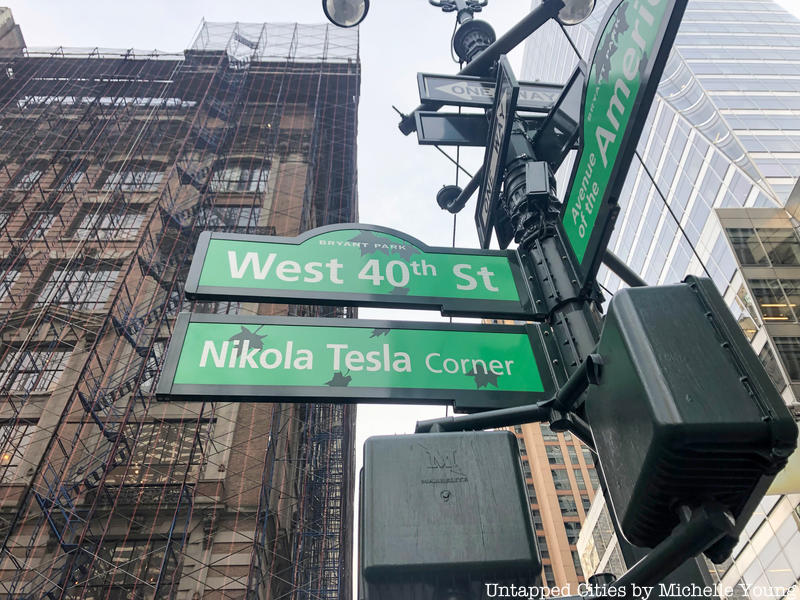 July 10th, 2016 marked the 160th birthday of Serbian-American inventor, engineer and physicist, Nikola Tesla, regarded as one of the most important figures of the 19th and 20th centuries. In 1884, a 28-year-old Tesla was hired by Thomas Edison, and moved from his home country in the Austrian Empire (present day Croatia), and would go on to live and work in New York City for 60 years. Tesla was credited with the advancement and creation of a number of important inventions, but unfortunately, others would often be credited for his work. Here is a list of the top 10 places to find Nikola Tesla in New York City.

As Untapped Cities previously reported, Tesla lived at the New Yorker Hotel for the last decade of his life in rooms 3327 and 3328, which served as his bedroom and study, respectively. Prior to his 10-year long stay at the New Yorker, Tesla lived at the Waldorf-Astoria, where he was known for throwing grand dinners for his friends and acquaintances, including author Mark Twain. Though he enjoyed fame and fortune for most of his life, he spend 1933 to 1943 in debt.

On January 7, 1943, a housekeeper found Tesla dead in his room, after she ignored the “do not disturb” sign on his door.In 2001, the Tesla Memorial Society installed plaques on the outside of the New Yorker and on the doors of his hotel room which list a few of his best-known accomplishments. For those who can’t make the trip to the hotel, the 3D visualization company Matterport offers a virtual tour of Tesla’s rooms in their current renovated state, created by Real Virtual Zone.