Since the 1980s the MTA Arts & Design Program has brought art underground by installing over 300 works of art throughout New York City’s subway system. The program has commissioned hundreds of artists that range from kids to the world famous, and for only $2.75 you can see all of them. With summer almost over and the heat index still climbing, here are 8 aquatic-themed subway stations for you to dive into.

For more art, join us for our upcoming Art in the NYC Subway Walking Tour, kicking off on May 13th:
Behind-the-Scenes Tour of NYC Subway Art The Essex-Delancey Street subway station is one of the most stops in Manhattan, specifically on the Brooklyn-bound platform. Shad Crossing by Ming Fay depicts the shad fish, which travels through the Hudson River every spring. The installation also represents the journey of immigrants across the ocean and the journey of the everyday subway commuter, as well.

While you’re at Essex-Delancey, check out the remnants of the former Essex/Delancey Williamsburg Bridge Trolley Terminal, to be turned into the future Lowline park.

Platform Diving by Deborah Brown is one of the more whimsical installations in the MTA’s collection. Seven mosaics show what it would be like if marine creatures took the subway. From seals leaving the station, to a parent and baby beluga on the train, the colorful tiles of Houston Street tell a charming story worthy of taking a few minutes to check out.

Also make sure to check out the other installations of the 1, 2, and 3 line of the NYC subway.

The 81st St.-Museum of Natural History station is a museum in itself.  For Want of A Nail is a collaborative installation by the MTA Arts and Design Team that maps out the journey of evolution. Filled with vivid scenes like this ocean mural on the Brooklyn-bound C platform, others consist of a galaxy-themed stair case, fossils embedded into the tiles, and everyone’s favorite, the animal mosaics.

Also check out the Secrets of the American Museum of Natural History. 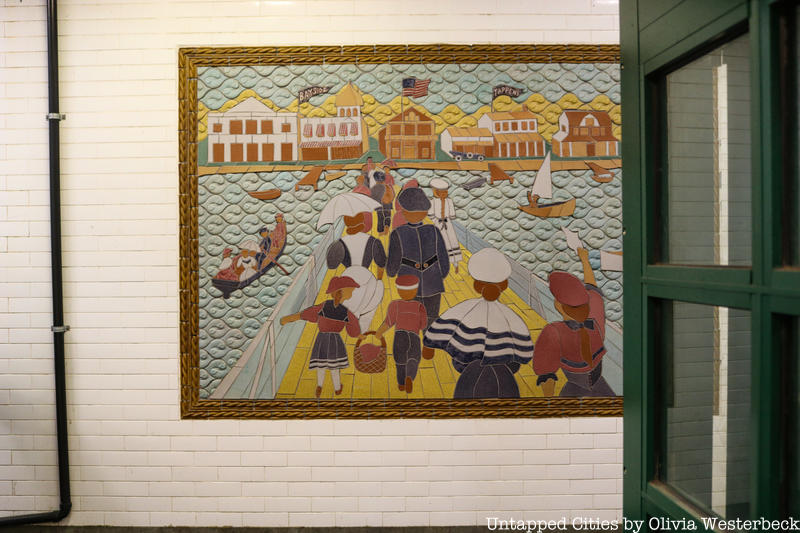 If you end up in Sheepshead Bay, take note of the scenic installation that has a hint of history. Postcards from Sheepshead Bay by DeBorah Goletz depicts scenes from the historic oceanside neighborhood. Originally named after the kind of fish prominent in the area, the sheepshead (a fish that has human-like teeth), the Brooklyn neighborhood is known for its fishing and nearby beaches. Tucked away behind the downtown 4/5/6 platform, en route to the J/M/Z Chambers Street station, is an installation created by kids. The students of PS 20 and PS 126 created Buildings, Boats, and a Bridge as part of a partnership with the MTA Arts and Design program and Studio in a School Association.

See this station and the abandoned platform at Chambers Street in the Untapped Cities subway tour, which includes a visit to the Lowline Lab.

7 waves 4 twenty eight by Gerald Marks at 28th Street on the 6 line is a 3D computer-animated seascape mural. As a result of the glass blocks, lighting, and the curvature of the wall, the installation creates an illusion of movement. Commuters can best see this piece in action while traveling past it on the train. [Update: This installation has since been replaced by blooming flower mosaics by Nancy Blum].

If you can’t go to the beach, the least you can do is look at it. Although the Livonia Avenue station’s installation is titled Seasons by Philomena Williamson, the summer piece of the series does the hottest season of the year justice.

Just like the ocean-side neighborhoods of Gowanus and Red Hook, the nearby Smith-Ninth Streets station is filled with maritime history. After undergoing a massive renovation in 2013, the station received an installation called Fathom Points + Compass Bearings by local artist Alyson Shotz. The art piece tells a story of the Brooklyn-area’s nautical past, complete with 26 glass walls that depict the evolution of the area’s waterways with different maps spanning from the 1700s to 1900s, and a mosaic blueprint for boat hull built in 1770.

Explore Art in the NYC Subway Walking Tour with us on May 13th.
Behind-the-Scenes Tour of NYC Subway Art

Next, check out 20 Original Examples of NYC Subway Art and Build Your Own NYC Subway System With A New Game. Get in touch with the author @themaximalistny