City Hall Park is surrounded by stunning governmental and municipal buildings that date all the way back to the early 19th century. The swath of land that sits between Broadway and Park Row, provides a small section of green space for pedestrians to escape to. Tourist and locals alike are sure to point out City Hall, the site’s most notable attraction, but the history of the park encompasses much more than just its buildings: 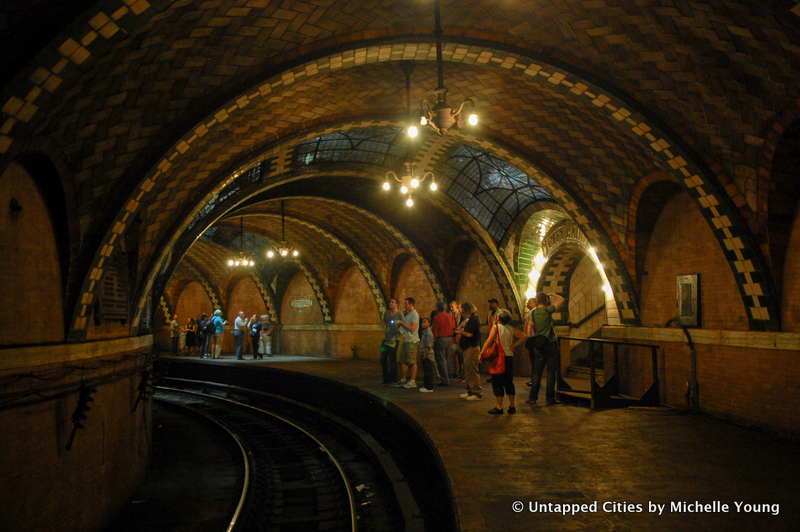 The station was closed just a few decades later in 1945 because its curved platform wasn’t able to accommodate the IRT’s newer, longer cars. Today, the subway stop still remains closed but you can get a quick glimpse of the platform on our Underground NYC Subway tour, as we take the 6 train past its last stop at Brooklyn Bridge.

If you look around City Hall Park, you can still see evidence of the old station too. An emergency exit is in the restricted area in front of City Hall, and glass blocks, where natural light filters into the station, are located on the northern most end of the park between the park fence on Broadway and the chess tables. As our Underground NYC Subway tour guide Justin Rivers describes:

“There is a cement embankment with glass blocks in it on the northern most end of the park between the park fence on Broadway and the chess tables. You can clearly see it. That’s one of the spot where natural light filters down into the station through the glass ceiling. The other embankment is harder to spot and is covered in weeds. The street entrance to CHS is an old IRT entrance now painted completely black. It’s located inside the gated grounds of City Hall by the Broadway gate directly across from the newsstand on Broadway by the W, R City Hall stop.”

Join us for our popular NYC Underground subway tour:

9. A Notorious Bridewell Prison Existed on the Site of City Hall Park

Its most notorious reputation came from during the American Revolution, when it was a British controlled prison. Construction on Bridewell began in 1775, a year before the Revolution, and the British didn’t bother to finish the prison. Prisoners reported that there were no panes in the windows to keep out the cold and conditions were likely similar to those in the sugarhouse prisons nearby.

The Versailles panorama today at the Metropolitan Museum of Art

In the early 19th century, a curious building, known as the Rotunda existed just north of City Hall. Artist John Vanderlyn received permission from the city to construct the circular edifice in order to display a large oil painting, Panoramic View of the Palace and Gardens of Versailles, which is currently displayed in the Metropolitan Museum of Art. Although it was tiny in size, with an appearance like a “miniature Pantheon,” the Rotunda is regarded by some as the city’s first art museum.

Ironically, Vanderlyn did not complete his panorama in time for its opening, and another piece had to be displayed in its place. The building was later repurposed as a small courthouse, as well as a naturalization office and post office. In 1870, however, it was demolished as the city began constructing the Tweed Courthouse.

7. City Hall Park Was Once Used as a Public Execution Site During the 17th century, the site of City Hall Park was once a communal pasture, where livestock could freely roam. The open green space, known as the Commons, was used as a public execution site during the American Revolution. At that time, the gallows were located near the old Hall of Records, and an estimated 250 prisoners of war were executed behind the soldier’s barracks, whose archaeological remnants are partially below the Tweed Courthouse.

6. City Hall Park Was Home to the City’s First Almshouse

Artifacts unearthed beneath City Hall with buttons from the almshouse. Image by Chrysalis Archaeological Consultants

Before City Hall Park became the bustling green space it is today, it was home to the First Almshouse, one of New York City’s first welfare institutions. Built in 1735, the building stood on the site until 1797, when a second almshouse was constructed in its place.

Its main purpose was to help the poor, including struggling widows or orphans. Not only did the institution provide food, but it also served as a workhouse, where tenants could learn skills to aid them in finding jobs and employment opportunities. Moreover, the site also served as an infirmary.

The Second Almhouse functioned in much the same way as the first building until the residents were moved farther north in the city. Following the transfer, the building was used for several purposes: it came to house the American Museum and the Chambers Street Bank, and was also used as a court and public offices until it was destroyed by fire in 1854.

5. There are Mutant Squirrels in City Hall Park Squirrels are a fixture in New York City, but we’re accustomed to see ones with grey fur. This is not so much the case in City Hall Park. Some of the fluffy rodents here have jet black fur, which is sometimes tinted red. The color is due to a recessive gene, which doesn’t usually appear in large populations. Because City Hall Park is surrounded by urban land (essentially creating an “island effect”), the trait appears in higher frequency. We’ve also spotted these squirrels on Roosevelt Island.

4. There Was a Native American Trail Bounding the Park City Hall Park’s western boundary is now Broadway, but it was originally a Native American trail called the “Wickquasgeck” (translates to “birch-bark country” in Algonquian.) Before the city was covered in concrete and steel, the pathway cut through the natural swamp lands of Manhattan, starting from present-day Lower Broadway. Dutch explorer David de Vries, mentions “the Wickquasgeck Road over which the Indians passed daily” in his journal, which dates back to the year 1642. This trail would become modern-day Broadway.

3. Several Fountains Once Stood in the Place of the City Hall Park Fountain

It took five years to build the Croton Aqueduct, which brought fresh drinking water from upstate to Manhattan. In celebration of its opening, a fountain display at City Hall Park was held on July 4th, 1842, featuring the new Croton Fountain (the city’s first decorative fountain), which shot water from the aqueduct up to 50 feet in the air.

The beautiful structure, noted for its 1850s style bronze candelabras, has since been replaced by a new fountain designed by Jacob Wrey Mould (the present-day City Hall Park Fountain). It was initially installed in City Hall Park in 1871, only to be disassembled and shipped to Crotona Park in the Bronx in 1920.

In its temporary absence, Frederick MacMonnies’s controversial Civic Virtue was erected in 1922, which was then replaced by the Delacorte Fountain in 1972. The Mould fountain, however, was restored and brought back to its original site in 1999 after $34.6 renovation of the park.

2. The Declaration of Independence Was Read for the First Time in the City at City Hall Park Three months before American Revolutionary war soldier, Nathan Hale, was captured and executed by the British, George Washington had gathered his men on the Common (now City Hall Park) to read out loud the Declaration of Independence, which had just been adopted by the Second Continental Congress in Philadelphia.

Next time you pay a visit to City Hall Park, look for a bronze plaque by the Broadway entrance that honors this historic event. It bears an inscription that reads:

NEAR THIS SPOT IN THE PRESENCE OF GENERAL GEORGE WASHINGTON THE DECLARATION OF INDEPENDENCE WAS READ AND PUBLISHED TO THE AMERICAN ARMY JULY 9, 1776.

1. There is a Memorial Dedicated to Victims of Crime Several monuments inside City Hall Park honor prominent individuals throughout American history, including Jane Addams and Joseph Pulitzer, whose newspaper was located on the now-lost Newspaper Row alongside City Hall Park. One memorial, however, is specifically dedicated to the citizens of New York who have been victims of violent crimes. Dedicated in April 24, 1991, the grey granite plaque was fabricated by Michael Lewis, and donated by the National Victim Center. Alongside the plaque, a tree stands as a lasting tribute.  Unfortunately, the area where the plaque is located is off-limits due to security barriers.