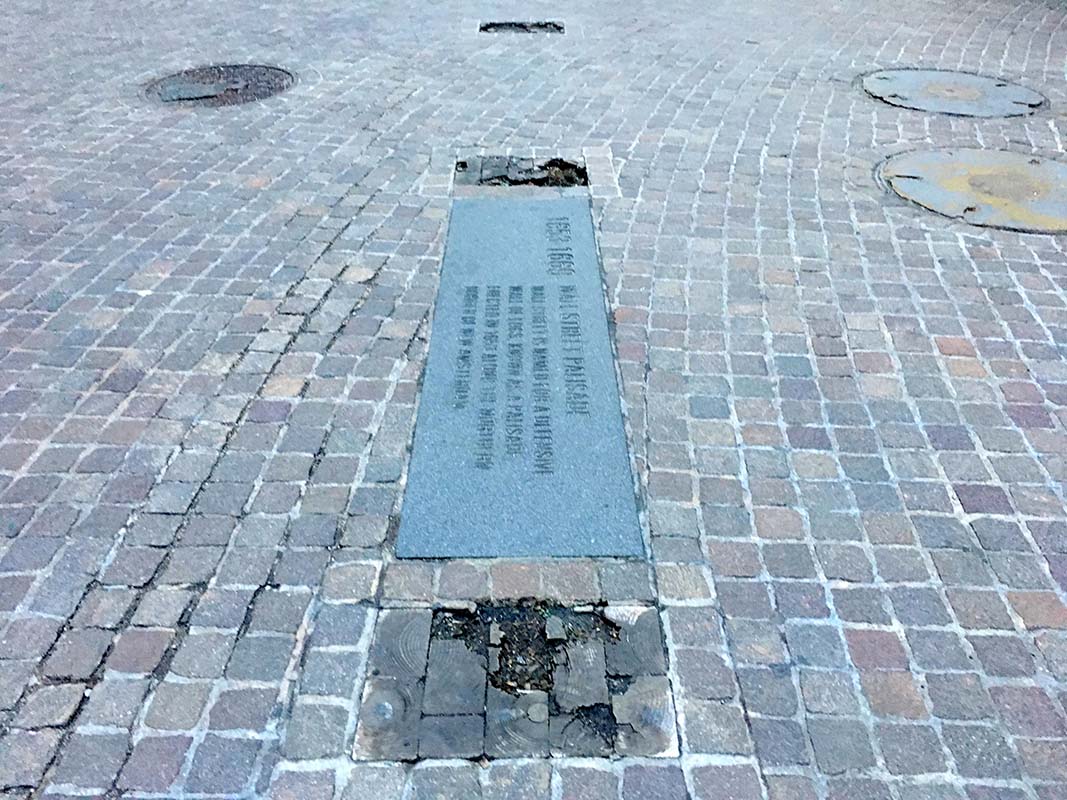 Walking along Wall Street today, you might notice some curious square and rectangular wooden block pavers amidst the “Eurocobble” stones. Quite forgotten among the street work done from 2008 to 2010 along Wall Street were a few nods to New York City’s history embedded within the New York Stock Exchange Streetscape+Security Project, an initiative by the NYC Economic Development Corporation, the Department of City Planning and the Lower Manhattan Development Corporation and designed by the architectural firm Rogers Partners, in response to security concerns after 9/11. One, that has been only minimally maintained, is the series of wood block pavers that run from Broadway to William Street, intended to recall the path of the Dutch wooden defense wall that gave the street its name. According to the Downtown Alliance, the location of the pavers follows the exact path of the wall. The wooden pavers were installed in late 2009 and look nearly identical to the type of wooden pavement blocks that the city experimented with from the 1830s to early 20th century in Lower Manhattan, thought to be more durable and more quiet. Sadly, most of the wooden markers from Nassau Street to Broadway are behind security fences (seen above), making the impact of the installation far less significant than originally intended. In addition, many of the wooden pavers are in poor condition, with some missing most of the wood fabric, almost eliminating the raison d’être of the project: Another historical shoutout included in the streetscape project was a long, granite curb that marks a the path of a 1620 Dutch canal:

And finally, if you were curious about what exactly is Eurocobble, it’s preassembled cobblestone that can be created in pre-defined patterns and shapes and installed in a much more efficient manner, reducing costs on site.

Discover more about the history of Wall Street in our upcoming tours of the Remnants of Dutch New Amsterdam and 400 Years of History in One Mile:

Next, read about the secrets of the former Slave Market on Wall Street.