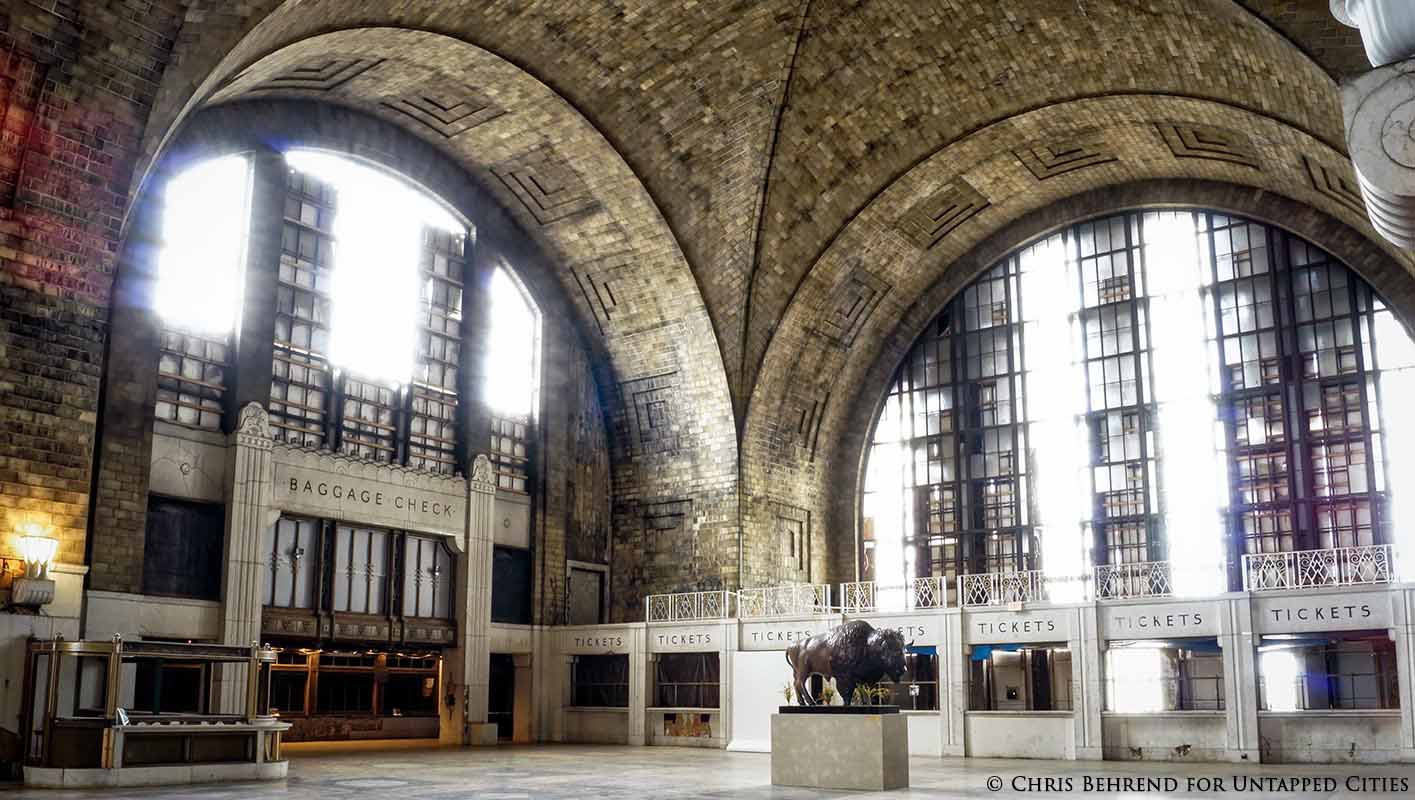 Ever heard of Central Terminal? No, not Grand Central Terminal in New York City. The train station we’re referring to is on the other side of the state in Buffalo, New York – large enough to accommodate over 3,200 passengers every hour and 1500 employees back in its heyday.

Built in the late 1920s, this classic and nearly forgotten Art Deco train station fell into obscurity, for several decades, as it sat empty and abandoned on the east side of Buffalo. It was designed by the prominent architects, Alfred T. Fellheimer and Steward Wagner of the Fellheimer & Wagner firm. Mr. Fellheimer was the lead architect for several other famous train stations in the United States such as Grand Central in New York City and the Cincinnati Union Terminal in Ohio. Construction began in 1927 and opened to the public in 1929. It cost the New York Central Railroad line over fourteen million dollars to complete this masterpiece.

Despite years of abandonment, neglect, vandalism, looting, and depressing management, the grandeur of this forgotten gem remains, waiting to be rediscovered.

Imagine for a moment that you’re a railroad passenger in the 1930s traveling from New York City all the way to Chicago. That was a long and tiring trip back then. In the 1930s, however, train travel was still king, and every station you went through was full of conveniences and amenities for tired and hungry travelers. In terms of rail travel, Buffalo was second only to Chicago, particularly as it was a halfway stop between Grand Central Terminal and LaSalle Street Station as you embark on this long trip across the northeast into the midwest. As your train pulls itself across endless tracks of wood and steel, you might see other stations designed by Alfred T. Fellheimer such as Quaker Ridge in New Rochelle or Union Station in Utica. But once your train passed through Syracuse and Rochester along the rustbelt, your final stop before heading down Lake Erie is the industrial and architectural giant of Buffalo – still the second largest city in the state.

As you enter the city on a clear night, you can easily spot a fifteen story octagonal Art Deco tower beaming with lights (which still dominates the East Side skyline of Buffalo today) from miles away. It’s likely the first time you’ve glimpsed at the new station, which was just completed in 1929, so it is still brand new and feels completely modern. Your train carefully squeaks and clacks its way toward Central Terminal across a 928 lever interlock railway with 30 miles of new track and a state-of-the-art signal system. You pull up to one of fourteen high-level platforms and come to a complete stop. The locomotive up front releases a blast of steam and you hear whistles, train conductors, and a crowd of passengers eager to step off and get inside the station. Central Terminal’s tower offices, postal and baggage facilities, employed a staff of 1500 people, and was designed to accommodate 3200 passengers every hour! You step off onto a clear-lit concrete platform (covered by rounded steel canopies) and make your way toward a ramp leading up to the main concourse. Hollywood and Broadway stars like Gene Harlow and Judy Garland came through Central Terminal so you look around to see anyone recognizable. After a refreshing walk, you pass through a large entrance and enter an immense space: a bright and beautiful concourse filled with gift shops, news stands, soda fountains, a comfortable lounge area and a lavish dining room. After buying a pack of smokes and a copy of the Courier Express Newspaper, you’d definitely want to check out that beautiful lounge area directly across the concourse from the dining room. Comfortable seating awaits, and a tall, arched ceiling with Spanish stucco of blue sky and clouds are revealed above. Plaster medallions and decorations of famous scenes from across the state like the Statue of Liberty, Niagara Falls, and a modern-day locomotive capture your imagination.

After lighting a cigarette and reading through the newspaper, you decide to enter a lavish dining room with several large U-shaped counters made of black marble with enough seating for 250 people. Silver, bronze and marble decorations on the walls separate each counter. After a satisfying meal, your connecting train is announced on the loud speakers. Sad to go, you walk past a tall, illuminated, four-sided golden clock in the middle of the concourse and a tremendous bronze colored bison on your way back to the train tracks. Sounds like a pretty amazing place, right? It’s an experience any train buff, historian or local resident would give a great deal to experience. Because after the final train came through in 1979, the next two decades mark the darkest chapters in this one-of-a-kind train station whose main concourse is (considered by many architects) one of the most incredible public spaces ever constructed in Buffalo. By the 1980s, the city was already in serious decline due to a variety of reasons, as was the passenger train industry, which had already slowed down substantially since the early 1950s. By 1971, Amtrak operated the station but didn’t have enough capital for renovations.

Central Terminal was added to the National Register of Historic Places in 1984 with a very uncertain future. The private individuals who owned the property at that time left the station vacant, abandoned and it was sadly looted by vandals. These shameful owners stripped the interior and sold off anything of value and proceeded to use the ground floors for storage. By the 1990s the east side of Buffalo considered this place an absolute eyesore. Miraculously, after years of constant debate, Central Terminal was (likely) spared demolition due to a twelve million dollar price tag.

Finally, in 1997, a group of local residents came forth determined to stop the bleeding and save Central Terminal from further disaster. This group of preservationists created The Central Terminal Restoration Corporation. When approached by the CTRC for a price to buy the property from the beleaguered owner, he offered it to them for exactly one dollar, a common transaction amount for development projects. Thankfully, the CTRC has done a tremendous job of sealing up the building, fixing major structural issues and repairing this Art Deco gem for a much brighter and optimistic future. Just a few days ago, a $250,000 electrical upgrade was announced and The Buffalo News has reported that the selection of Canadian developer Harry Stinson may be just around the corner. The biggest decision on the table is wether or not Central Terminal should be re-opened as a train station for use by Amtrak. Others believe a new station should be built in the downtown area where most of the resurgence is happening.

Over the past two decades, Central Terminal has been used for art exhibitions, performances, Dyngus Day and in 2016, the interior was used as part of the set for the film Marshall. The CTRC continues to host guided architectural tours and other special events.

Perhaps the day may come again when “meet you by the buffalo” still means something; preserving it’s rightful place among the most unique train stations in the country. Untapped Cities encourages everyone to visit Central Terminal when stopping through Buffalo. It’s a monumental relic to a lost era of trains and majestic stations with an opulent history embodying this once great empire of public transportation – an experience you won’t forget!

View and purchase Chris Behrend’s photography here. Next, check out The Top 10 Secrets of Grand Central Terminal in NYC.