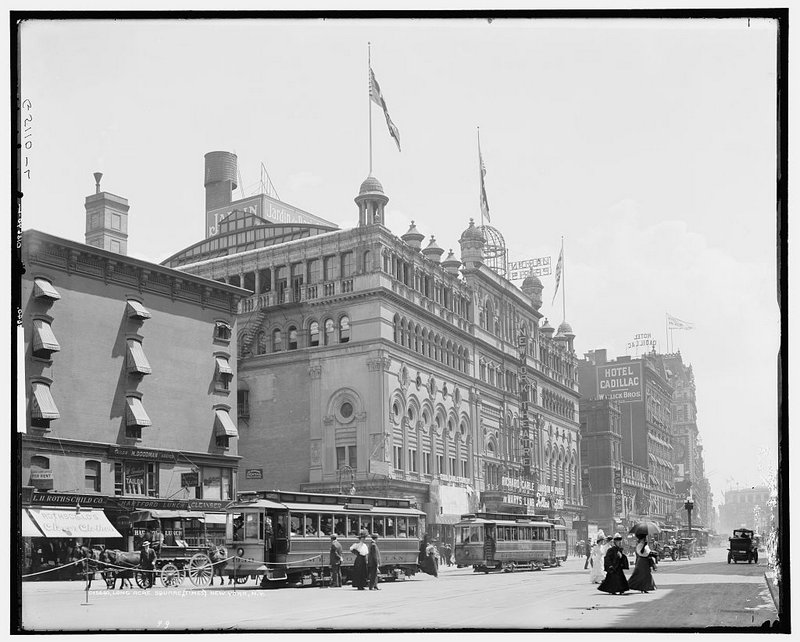 Hammerstein’s Olympia Entertainment Complex or Lyric Theatre between 1900 and 1915. Image from Library of Congress.

New York City has been a hub of artistic endeavors and creativity since its inception and as a result, the city, the art, and the theater scenes have rapidly evolved and reinvented themselves to keep up with the changing times. Since 1798, when Park Theatre was built, theaters have been built, demolished, rebuilt, moved, evolved, and abandoned.

These twelve lost theaters in New York City provide a rich glimpse into the changing tides from historical to modern Broadway.

Oscar Hammerstein’s Olympia’s Indiana Limestone building extended hundreds of feet across Longacre Square (now Times Square) between Forty-fifth Street, and Forty-fourth Street. In addition to creating the Olympia, Hammerstein also fathered a son with the same name, the famous lyricist and opera writer who flipped the normal musical writing process on its head by writing the lyrics first and following it with the score. His famous musicals such as The King and I and The Sound of Music are still performed and celebrated today.

After taking over a thousand men to build it, the Olympia opened the following day. The building showcased a music hall, roof garden, a concert hall, and the Lyric Theater which was decked out in Louis XIV style decorations in predominately blue and gold hues. The Lyric was only open for three years before a bankrupt Hammerstein sold the Olympia and the theater became Criterion Theater.

The Criterion was ever changing in both name and focus and eventually became one of Broadway‘s first “movie palaces” for movie musical releases. In 1935, the Olympia was demolished in order to make room for more modern buildings, including a new Criterion Theater.

When buildings are renovated or even demolished, the original structures aren’t always completely destroyed because it’s easier to build a new building on top of one that has some of its foundation intact. As construction workers dismantled the massive Toys ‘R’ Us in Times Square, they discovered the foundation of a theater and an orchestra pit that once stood tall in the stunning Olympia.