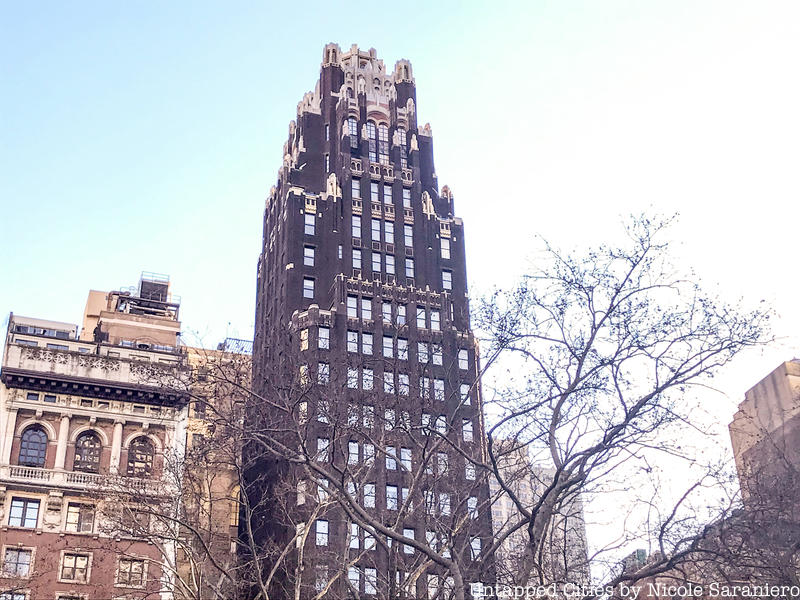 With its lavender-tinted windows, towering gold-crowned facade, and domed entranceway, the Bryant Park Hotel (originally the American Radiator Building) looks like it might belong in a fairytale or a nightmare. It was designed by architect Raymond Hood (who was also involved in Rockefeller Center and the New York Daily News building) in 1924, it contains some elements of the neo-Gothic tradition, lined with leering gargoyles and twisted spires. Its vertical windows are distinctly modern, and its dark black facade interrupted by brilliant gold trimming lodges it firmly in the Art Deco world. It was actually designed to represent the product that it was created to house—the radiator—and has been compared to a glowing coal, especially when illuminated by floodlights at night. It was New York’s first building with such extravagant exterior lighting.

It originally served as a large public showroom for radiators, boilers, and other new inventions at the time. Its black brickwork gives it an imposing, looming presence that makes it seem larger than life. Golden carvings of dragons, dolphins, and other creatures add to its otherworldly aura. Today it serves as a luxury hotel, and hosts a bar and a movie theatre in its basement.