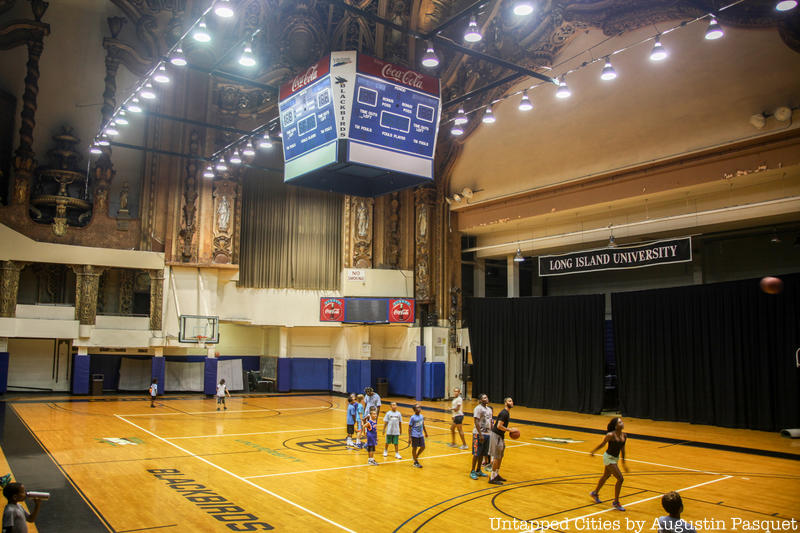 9. LIU Brooklyn Owns One of the Last Wurlitzer Organs in New York City In 1928, Wurlitzer installed a behemoth organ at the Paramount Theater. It was meant for silent films: an operator would sit down and watch the movie while reacting to the onscreen moments live. The ever watchful organist was always on the scene and ready, whether he or she was providing mood music for the screening, playing a musical interlude or adding sound effects to corresponding moments of the film.

Eventually, movies became less silent and the need for an organist diminished. However, when the theater closed and was sold to LIU, the instrument remained. Now it stands as one of only two of its kind in existence, the other being at Radio City Music Hall.

8. LIU Post Campus was Purchased from the Daughter of a Cereal Tycoon The LIU Post Campus is beautiful and that can partly be attributed to cereal, a lot of it. The original owner of the grounds was Marjorie Merriweather Post, daughter of breakfast cereal and foods manufacturer, C.W. Post, who had somewhat of an unorthodox road to wealth. In 1891, C.W. Post had his second mental breakdown and spent some time in a sanatorium run by John Harvey Kellogg (yes, that’s the same Kellogg you are thinking of) and apparently loved the food so much that he decided to start a company based off it (the Post Cereal Company).

C.W. Post soon found a great deal of wealth in his entrepreneurial endeavors. However, his health eventually began to deteriorate. After finding out he had inoperable appendicitis, he killed himself in his Santa Barbara home. Following his death, his fortune and company were passed down to his daughter (and now cereal heiress), who was incredibly successful in her own right (one of her successes being the construction of Mar-a-Lago resort, now owned by Donald Trump). In 1951, Marjorie sold her estate in Brookville (known as Hillwood) to Long Island University for $200,000. The campus was named in honor of her father in 1954. Many of LIU Post’s buildings formerly served as homes for the wealthy before they were converted into classrooms and office buildings. In fact, the campus is comprised of three Gold Coast estates: the Winnick House; the Fine Arts Building, formerly owned by famous Wall Street broker, Edward F. Hutton; and Lorber Hall, used by students majoring in a variety of subjects, including Accountancy and Business.

Of the many Instagram-able sites of LIU, the Winnick House is definitely one of the most photogenic. Now the administration center for the Post campus, this Tudor-revival once served as home to Marjorie Merriweather Post, who threw so many parties at the estate, she may well have inspired The Great Gatsby. Whereas royals, celebrities, and other notables of New York in the 20s all came to the Winnick House to party late into the night, students now have the far more boring administrative tasks housed in the building.

Of course, the Winnick House was not always known as the Winnick House. In fact, it was only recently in 2004 that the mansion gained its new title. After receiving a large donation from alumni and multi-millionaire Gary Winnick (‘69), the school decided to renovate Ms. Post’s house and declare it the Winnick House in honor of the man footing the bill. While some grads have received commencement addresses from famous businessmen, celebrities, and politicians, few are lucky enough to have a frog as their commencement speaker. In 1996, LIU invited Kermit the Frog to deliver the commencement address for the graduating class of its Southampton College, well known for its “green” environmental studies program. Kermit of course accepted and showed up to the ceremony dressed in his own cap and robe. During his speech, he thanked the students on behalf of all animals for their dedication to saving the environment. “It’s not easy being green,” he said, “but a global movement now wears your color proudly.”

The school also granted Kermit an honorary doctorate of amphibious letters — the very first of its kind  — for his work calling attention to environmental issues. The muppet proudly accepted the award and promised “to hold regular office hours, put new magazines in [his] waiting room, and to make late-night house calls regardless of [students’] health plan coverage.”

5. Some of the First Classes at LIU Post Were Taught in Stables and Garages LIU Post’s classrooms were not always the most decadent. During the early days of LIU, when nothing had been constructed yet, the Post mansion was the only building the university owned.

While this was certainly nice, it wasn’t enough to house and teach the 219 students that attended the school. WWII had just ended when the campus was founded and a new GI bill made college attendance more feasible; thus, there were a lot of students and not a lot of classrooms or facilities. The only solution to this problem was to stick those students in converted stables and garages and have them learn out there.

4. LIU Post’s Doll House Was Once a Playhouse Located on Riggs Lawn between Mullarkey Hall and the residence halls, Long Island University Post’s historic Doll House was constructed in 1934 as part of the original Post estate. Called Deen-Wee, the structure was meant to serve as a “life-size doll house” / playhouse for Nedenia, Marjorie’s 11-year-old granddaughter.

For a period of time, the Doll House operated as a cafe, where students can grab a quick bite of food or a cup of coffee in between their classes.

3. LIU was the First to Bring the NY Philharmonic to Long Island LIU’s Tilles Center for Performing Arts is the premiere concert hall in Long Island. Not only has it had over 70 performances each season during its 37 years of operation, it has also housed some of the best-known musicians of all time, including Yo-Yo Ma and Idina Menzel. It was even the recording location for Bruce Springsteen’s, Santa Claus is Comin’ to Town. If you want to catch a glimpse of some beautiful fall foliage before the winter weather sets in, head on down to LIU Post in Brookville and check out the gorgeous 40-acre arboretum that surrounds its campus. Featuring more than 70 different tree species, the Arboretum houses such rarities such as a century-old American Elm, as well as a towering 105-foot-tall Tulip Tree, which bears a long, narrow scar left by a lightning strike.

Famous landscape architect, Marian Cruger Coffin, laid the foundation for the arboretum, creating the rose arbor and all the gardens on the estate. For those who want to learn more about the history of the campus greenery, there’s a self-guided walking tour of the whole arboretum. It usually takes 30-45 minutes to complete, and labels with facts and information are available for all of the trees. It is open to the public seven days a week from dusk until dawn — and, the best part is that it’s free!

1. LIU Post is Home to the Only On-Campus Equestrian Facility on Long Island

In addition to its lush arboretum and stunning buildings, LIU Post’s other claim to fame is that it is the only college on Long Island with an on-campus equestrian facility. Called the North Shore Equestrian Center, it is comprised of three main barns (indoor arena barn, school barn and a boarder barn), which are fitted with interior sprinkler systems and both exterior and interior wash stalls. The indoor arena is one of the largest riders can find on Long Island.

Those with a passion for animals can also minor in Equine Studies at LIU Post with a focus on topics like PreVet Studies, Equine Health, Equine Business and Equine Education.

Next, check out The Top 15 Secrets of Columbia University in NYC and The Top 10 Oldest NYC Schools and Universities Still Operating Today.