City Island – even to New York locals – feels idyllic, a world away from the commercial and cultural hub we tend to envision when we think of “the city.” The small town getaway and resort, located in the northeastern corner of the Bronx, is considered by some to be one of its best kept secrets. Its charm may lie in the fact that it gives off a nautical vibe: you’ll notice the standing boats and the abundance of seafood restaurants available. Or maybe it’s just that the rent is actually affordable. Whatever the reason, City Island has piqued our interest.
Here are 10 secrets about this quaint, waterfront neighborhood:

In 1654, Englishman Thomas Pell purchased a 9,166-acre tract of land, which included what is now City Island, from the Siwanoy Minneford Indians. Between 1700 and 1761, City Island – known at the time as Minnewit, Mulberry, or Great Minnefords Island – was sold several times before it was purchased by Benjamin Palmer in 1761. Envisioning a bustling port city, Palmer intended to transform Great Minnefords Island into a commercial center that would rival that of Manhattan’s. To honor the developmental phase that was to come, the property was renamed New City Island. However, as the island began to acquire its own commercial identity – largely due to the community of oyster fishers and shipbuilders –”New” was eventually dropped from the name.


9. City Island Once Thrived Because of Oysters 8. You Shouldn’t Eat the Shellfish from City Island City Island is known for its seafood restaurants, yet the New York State Department of Health has declared shellfish, specifically “crab or lobster tomalley and cooking liquid” (soft, green stuff), unsafe to eat due to PCBs and other contaminants in the water. By law, the seafood must come from somewhere else. Weakfish, Bluefish, the American eel, and Stripped bass are also recommended in dosages.

7. The Royal Tenenbaum House is on City Island

The summer house from Wes Anderson’s, “The Royal Tenenbaums is located on City Island, at the end of Tier Street just west of William Avenue. This house includes a whale weathervane and a wraparound porch overlooking Eastchester Bay and Pelham Bay Park. The same house was in 1962’s “Long Day’s Journey Into Night starring Katharine Hepburn. The island is also a picturesque backdrop for films in general. The City Island Diner was featured in Solitary Man with Michael Douglas and Susan Sarandon and Jerry Seinfeld’s YouTube series: “Comedians in Cars Getting Coffee.” 5. A “Hellgate Pilot” Was a Necessary Job in City Island From the mid-1800s until 1967, a Hellgate Pilot served an important role on City Island. Due to dangerous water conditions near Hellgate, characterized by fierce tides, whirlpools and jagged rocks, Hellgate Pilots were required to board ships and guide them down the East River safely towards Manhattan. The Hellgate Pilot House, which still stands at the Consolidated Boat Yard on Pilot Street on City Island, was where men stood to watch for water vessels. It serves as a reminder of the Hellgate Pilot Association before it was absorbed by the Sandy Hook Pilot Association in 1967. Today, the Sandy Hook Pilot Association continues to provide pilotage service for the port of New York, New Jersey, the Hudson River, and of course, Hellgate. To aid in the transfer bodies onto Hart Island. New York City’s mass burial ground, the New York City Department of Transportation Bureau of Ferries currently operates a ferry, which runs from City Island to Hart Island. Thanks to the efforts of the Hart Island Project, the island, operated by the Department of Corrections, is open to relatives of the deceased, as well as general visitors, who can visit a viewing area. Both visits only occur once a month, however.
See photos of our recent visit to Hart Island.

2. City Island Has Gardens Influenced by the English

In the early 1900s, the design of several gardens and properties on City Island were influenced by the English, who favored intricate garden designs, colorful flowers and clipped topiary. The Francis Vail Estate on Paulis Place still stands as an example of City Island’s architectural past.

1. The City Island Nautical Museum Was Once a School 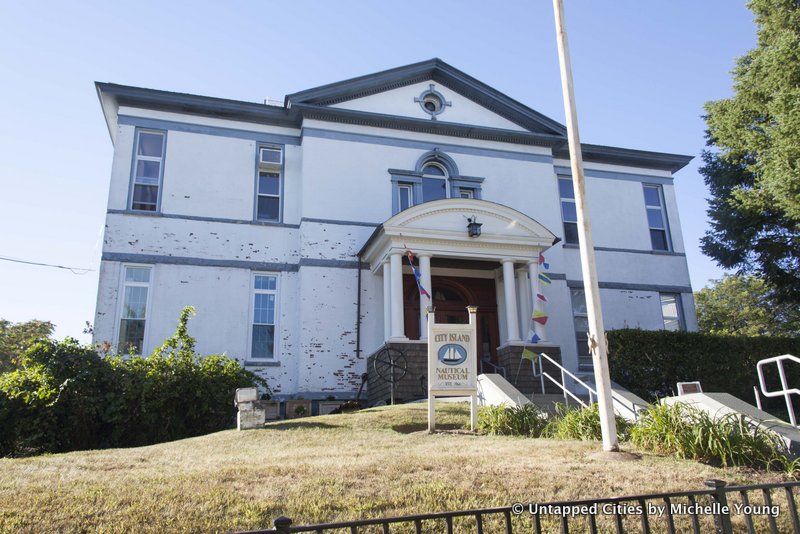 The City Island Nautical Museum, located on 190 Fordham Street, was once the site of P.S. 17 (originally P.S. 102), a school building designed by C.B.J. Snyder and built by the city of New York in 1897–98. From the 1920s to the 1960s, island local Ruby Dill taught kindergarten at the school before it closed down in 1976. To this day, many residents remember her. In recent years, the building has also been designated a landmark because of its “special character and a special historical and aesthetic interest and value as part of the development, heritage and cultural characteristics of New York City.”
For more heritage and curios, visit Trader John’s on City Island Avenue, a dream for nautical collectors.

Bonus: There’s an Adorable Lighthouse off City Island Possibly Named After the Devil

Built in 1877, the Devil’s Stepping Stones lighthouse stands at one-and-a-half stories high and lies just south of City Island. It is currently managed by the United States Coast Guard and once served as an important landmark to help ships navigate across dangerous waters. The origins of its name can be traced back to a legend, which claims that the lighthouse was named after the Devil, who threw boulders into the Long Island Sound as stepping stones to escape from the Wescheswer Country Indians, who where trying to capture him. Quite possibly due to the story, Colonial maps of the area refer to the Long Island Sound as “Devil’s Belt” and the rocky reefs as “Devil’s Stepping Stones.”
Next check out The Top 10 Secrets of Hart Island, City Island: The Closest Little Island in NYC You Didn’t Know About and The City Island Nautical Museum. Also step back in time with at the Bartow-Pell Mansion Museum.