Common sense would urge you not to look down at the ground while navigating the crowded streets of New York City. But if you steal a glance every now and then, you may come across a fun discovery.

From 19th century clocks to art installations and celebrity handprints, here is a list of the 13 most unique New York City sidewalk installations. 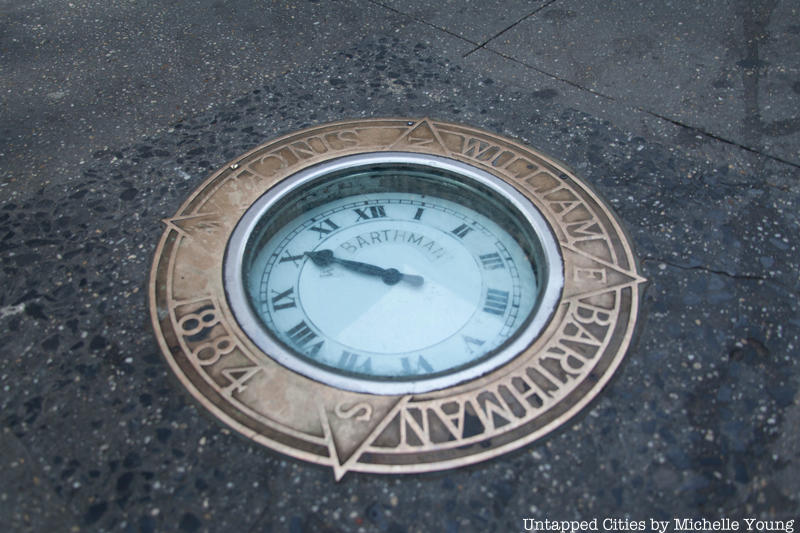 If you’ve lost track of time and happen to be on the corner of Maiden Lane and Broadway, leave your phone in your pocket and just look down at the clock in the sidewalk. A timepiece was placed there by New York City jeweler William Barthman in 1925. Barthman came up with the idea to put a clock in the sidewalk in front of his business to lure customers into the store, and it worked. The clock became an instantly famous New York City oddity. Over time, news of its existence even spread across the Atlantic and inspired an English jeweler to install one in front of his own Windsor storefront in 1949.

The clock you see now is actually the second one installed by Barthman. The original was installed in 1899 and was a modern marvel at the time. Barthman, along with his employee Frank Homm, designed a three-window jump hour clock that was illuminated at night by hidden lightbulbs and featured a technologically innovative battery backup. It took Barthman and Homm two years to design and build the clock, which proved to be so complicated that Homm was the only person who knew how to properly maintain it. When Homm died in 1917 the clock would often stop working, forcing the Barthman’s to shamefully cover up the dysfunctional timepiece with a piece of cardboard.

In 1925, Barthman replaced his and Homm’s design with a more traditional round faced clock. The only way to access the clock for repairs is from underneath the sidewalk in a small workspace. The room is only a few feet away from the subway network and is susceptible to shaking when the number 6 train goes by. According to one count, the clock is subjected to the pounding of approximately fifty thousand pedestrians’ feet every three hours. Considering all the wear and tear it has to subjected to on a daily basis, it has tick away virtually nonstop for almost 100 years.

Since its founding, Barthman Jewellers has moved a few doors down from its original location on Broadway, but has remained on the same block for 130 years. A replica of the iconic Financial District timepiece was made for their new location but the New York government denied permission to put it underfoot, stating that there would only be one sidewalk clock in the city.