New Amsterdam, in a nomenclature nod to the first settlement in New York City, is the name of a new medical drama on NBC that focuses on a fictional public hospital in Manhattan. In the show, “New Amsterdam Hospital,” standing in for the real Bellevue Hospital, is the oldest public hospital in America and it has a new medical director, Dr. Max Goodwin (played by Ryan Eggold from The Blacklist). Goodwin is intent on shaking things up, but has demons of his own to battle, including throat cancer and a child on the way with a somewhat estranged wife.

The cast is rounded out by other doctors in the hospital (emergency doctor Dr. Lauren Bloom, played by Janet Montgomery; Dr. Floyd Reynolds, played by Jocko Sims, Dr. Helen Shape, played by Freema Agyeman; psychiatrist Dr. Iggy Frome, played by Tyler Labine; and Dr. Vijay Kapoor, played by Anupam Kher). The show is based on the memoir Twelve Patients: Life and Death at Bellevue Hospital by Eric Mannheimer, who served as medical director of Bellevue for over thirteen years.

Here are the filming locations featured in the show so far: New Amsterdam Hospital is filmed in a mix of locations, which include the real Bellevue Hospital, Kings County Hospital in Prospect Lefferts Garden, Brooklyn, and Metropolitan Hospital in Harlem. The most memorable filming location is the main lobby of Bellevue Hospital at 462 First Avenue (pictured above), which includes the original brick building facade behind a new glass one, which creates a light-filled atrium. It’s in here that Dr. Goodwin runs into Dr. Helen Sharpe, the British doctor who serves as the one-woman PR machine for New Amsterdam. Goodwin later calls his wife from an upper level that overlooks the atrium. Also in the first episode, the scene where psychiatrist Dr. Iggy Frome’s patient meets a potential new foster mother is filmed in the garden next to this building just north of 26th Street. Our sources tell us that beyond the pilot, the hospital scenes are filmed at Kings County Hospital and on sound stages in Mount Vernon and Yonkers. 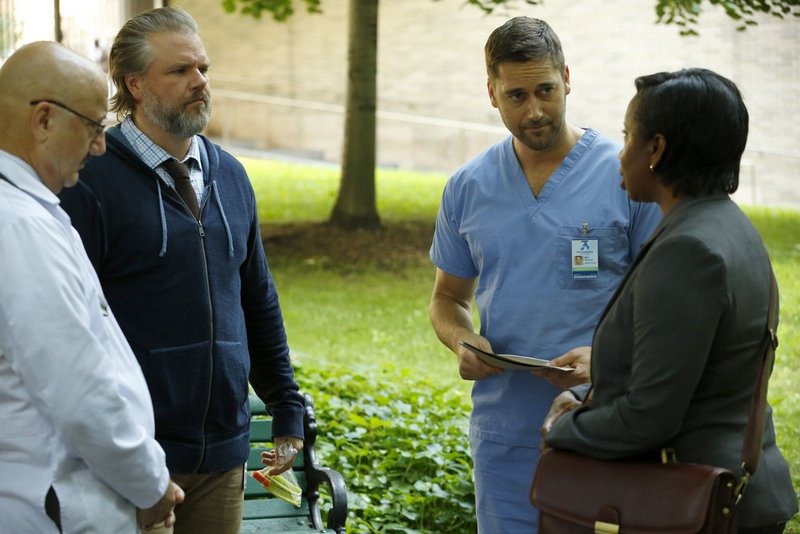 It’s true that Bellevue Hospital treated the first known case of ebola in New York City, though unlike in the show, it was not a patient who accidentally took himself there (nor was he a hapless transmitter of the supposed disease, to be used for terrorist reasons). In real life, the patient was a doctor from Columbia Presbyterian Hospital who had worked in Guinea on the ebola epidemic with Doctors Without Borders, and once he tested positive, he was moved to Bellevue Hospital for quarantine and treatment. You can read more about the history of Bellevue here. In the fourth episode, Dr. Frome takes his kids up to the roof and realizes he can grow a garden there, on the rooftop. These scenes, including when all of the doctors pitch in to plant the roof, are filmed at Kings County Hospital. The buildings were designed by Leroy P. Ward, more known for his work on the mansions of the wealthy on Long Island. The distinctive architecture at Kings County Hospital is a mix of many styles, but the rooftop terrace features Spanish-style tiling and a brick arched colonnade surrounding a main courtyard. Kings County Hospital is located in Prospect Lefferts Garden, Brooklyn. Dr. Goodwin and Dr. Sharpe take a coffee break atop a building that is supposed to be Bellevue Hospital. In the background you can see the SHoP Architects-designed building, the American Copper Building, so the location is close but they are actually a few blocks north of the hospital, atop Manhattan Place Condo.

American Copper is the tallest copper-clad building in the world and over time will turn from brown to green. The towers are connected by a three-story skybridge –the first major skybridge construction in New York in 80 years – that contains an indoor lap pool and lounge. 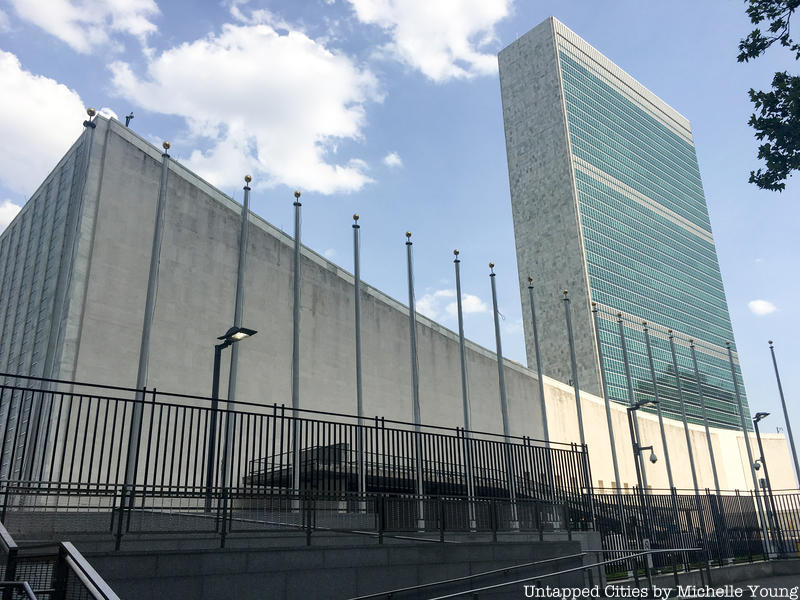 The United Nations figures heavily in the first episode, with a storyline about staffers and visitors who had carbon monoxide poisoning inside. New Amsterdam Hospital is treating some ambassadors who were affected. The show films in front of the actual United Nations in front of the visitor entrance just north of 45th Street, but no scenes were shot inside. Like most television shows, the Manhattan Cruise Terminal, located on Manhattan’s west side between 50th and 55th streets, is used as a stand-in as JFK Airport. The cruise terminal handles international arrivals and has the feel of an airport terminal. The future ebola patient is shown arriving to New York City, awkwardly hailing a cab and almost getting run over, and asks to be directed to New Amsterdam Hospital. When television shows need to film scenes showing Rikers Island, they usually opt for the former Queens House of Detention in Kew Gardens, Queens located at 126-02 82nd Avenue. This location is also used as the jail in Mr. Robot as well as The Night Of. Dr. Goodwin’s wife, Georgia (played by Lisa O’Hare), is seen in a dance studio when she gets a call from Dr. Goodwin. This was filmed at the Alvin Ailey Dance Studio on 55th Street and 9th Avenue. The acclaimed modern dance company was founded in 1958, and its current building, the Joan Weill Center for Dance, was opened in 2005. The site at 405 W. 55th Street was the former location WNET-TV studios, the channel which broadcast the Alvin Ailey Dance Theater Company’s first television appearance.

Psychiatrist Dr. Iggy Frome is trying to save a patient from another traumatic foster care placement and reaches out to the daughter of the patient’s former foster care mother (whom she thrived under until she passed away). They meet in Madison Square Park, next to the Flatiron Building and Dr. Frome tries to show the woman a diary that the patient kept while under the care of the woman’s mother.

In the opening sequence, we see Dr. Goodwin embark on a run, starting in Dumbo, Brooklyn so we assume that his apartment is located there. He crosses the Brooklyn Bridge and runs to the hospital to get his day started.

A patient is brought in to New Amsterdam Hospital, allegedly digging up his fiancé’s grave at Green-Wood Cemetery in Brooklyn. This cemetery was originally designed as a “rural” cemetery in 1838 away from the urbanizing areas of Manhattan and Brooklyn, but the neighborhood of Sunset Park rose around it. The cemetery has views of New York Harbor and lower Manhattan, and in 1860 was the second most popular the second most popular tourist site in the state with over 500,000 visitors a year. Green-Wood Cemetery is home to over 560,000 “permanent residents,” including Basquiat, Leonard Bernstein, Boss Tweed and other notable people. After an intense day, where New Amsterdam takes on the emergency room load of a nearby hospital, Dr. Lauren Bloom and Dr. Floyd Reynolds take a walk in Glick Park, located along the East River just north of the 34th Street NYC Ferry landing.

If you’d like to explore the real original New Amsterdam, join us on an upcoming tour of the Remnants of Dutch New Amsterdam: