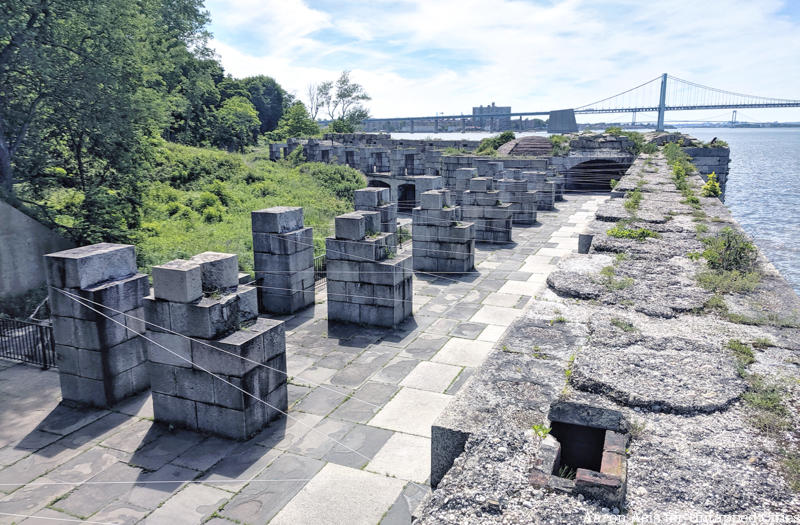 Tucked away on the north eastern edge of Queens is a rare remnant of New York City’s past that many don’t even know exist. Nearly 100 acres of land on the Willets Peninsula, originally inhabited by the Matinecock Native Americans and then owned by the Willets family, was used as a federal military base from the Civil War through the 1980s. In 1984, part of the land was turned over to New York City Parks and today, only a small portion of the land is still utilized by the federal government for the U.S. Army and Coast Guard.

Throughout the park there are remnants of the site’s former military life such as an abandoned Civil War-era fort and a decaying early 20th century battery. Only accessible with the guidance of Park Ranger, Untapped Cities Insiders and the public gained special access to the abandoned sites of the park during a special weekend event, Fortified. Discover the secrets we uncovered on our visit:

1. Construction of the Water Battery was Never Completed Perhaps the most iconic and unique structure at Fort Totten is the Water Battery. In 1857 the federal government purchased the land at Fort Totten from the Willets family to add another fort to the system of waterfront defense structures surrounding New York harbor. The new fort would be a sister fort to Fort Schuyler across the East River in the Bronx.

Construction of Fort Totten, named after General Joseph Totten, began in in 1862. The battery, which means it held more than six guns, was made of bluestone and granite. Traditionally hard and sturdy stones were used that could bear the elements and protect from round cannon balls, but these materials proved inefficient in standing up to new military technology, mainly rifled, or pointed, artillery. Work on what should have been a four-story fort was abandoned in 1864 and to this day the fort stands in an unfinished state, a rare remnant of the Civil War in New York City.

2. There is Rifled Artillery Lodged in the Wall Beyond the missing stories and roof, solitary arches, and piles of stone that giveaway the fort’s incomplete state, there are also small details that tell the story. Lodged in the wall on the second floor of the battery are two pieces of artillery from test fires that ultimately proved the fort obsolete.

The damage left by the rifled artillery that was shot into the wall has been left untouched and there are still pieces of the artillery lodged inside. When the shots were fired and the damage proved to be severe, construction on the site was halted and never started again.

3.The Tunnel to the Battery was the First Vehicular Tunnel in New York City To get to the water battery from the visitor’s center inside Fort Totten today, visitors walk through a long dark tunnel covered in scratched in graffiti, some messages dating back over 100 years. This tunnel, which runs alongside the torpedo battery, was constructed in 1870.

This tunnel was used to carry ammunition into the Main Magazine, a series of tunnels and vaults near the water battery, where it was stored. According to the Landmarks Preservation Commission, this tunnel is reportedly the first vehicular tunnel to ever be built in New York City.

4. No Battle Has Ever Been Fought at Fort Totten With construction of the Water Battery, Battery King, and the Endicott Battery from the 1860s through the early 1900s, Fort Totten was poised and ready for action, but luckily, it never came. Besides test fires, no missiles or cannons were ever shot from Fort Totten at enemy forces.

The Water Battery was deemed obsolete before it was even finished. The guns at Battery King, which shot artillery straight up into the air with the intention of hitting something when they came back down, were upgraded with the construction of the Endicott Battery in 1902. Cannons at the Endicott battery were hoisted over the wall and shot artillery straight at its intended target, a much more effective strategy.  When World War I broke out, the guns at the Endicott Battery were shipped overseas to Europe where they were much more needed than on the coast of Queens.

5. The Myth of a Secret Tunnel Though Fort Totten and Fort Schuyler are sister forts that stand opposite each other across the East River, there is no secret tunnel that connects them. Many have tried, over the decades, to locate this mythical tunnel, but it has never been found. While there was never a tunnel between the two forts, there was a defensive grid of torpedoes submerged in the river. At the time, the word torpedo meant an underwater mine. The silver balls that top the granite fence posts at the entrance to the park are either underwater mines or placement buoys that were used to align the torpedoes.

6. Electrically Guided Torpedoes Were Developed at Fort Totten (Thomas Edison worked on this) The Engineer Depot for the eastern United States was established at Willets Point in 1870, and a torpedo school was set up in 1873. The first structure you see when you arrive at the Visitor’s Center for the batteries is the torpedo battery built into the hill, constructed in 1886. In that same year, Building 611, which was used as a torpedo laboratory was built. Thomas Edison worked on this technology and developed an electrically controlled torpedo which could be maneuvered on a wire from miles away.

7. Fort Totten Features some of the Oldest Graffiti in New York City As mentioned in a previous secret, the tunnel that leads to the Water Battery is covered in graffiti, much of it etched into the wall more than 100 years ago. Among the names and dates scratched into the wall, a large painted yellow proclamation urges passerby to “Remember the Maine.” The USS Maine was an American navy ship that was sunk off the coast in Havana Harbor in 1898, and the graffiti likely dates to around that time. Walking through the historic buildings of Fort Totten Park, one large brick structure stands out among the rest. The “Castle,” built in 1887 was originally used by the U.S. Army Corps of Engineers as the Officer’s Mess Hall and Club. The Gothic-Revival styled building of red brick and white accents is now a designated New York City Landmark and the home of the Bayside Historical Society.

The historical society was founded in 1964 “to collect, preserve, and disseminate information concerning the history of Bayside and its adjacent communities; advocate for the preservation and protection of its most historic structures and distinctive neighborhoods… and strive to develop a broad constituency of like-minded preservation and educational organizations to protect the historic integrity of our communities and collections.” The society moved into the Castle in 1984. They use the space as a learning destination, a resource for researchers and the community, and a venue for the visual and performing arts.

9. Fort Totten Used to be Willets Points (so there were two!) Though today we know Willets Point  as the industrial area of Corona Queens made popular by F. Scott Fitzgerald as the “valley of ashes” in The Great Gatsby, the original Willets Point is the peninsula on which Fort Totten Park is located. The federal government bought the land from the Willets in for 1857 for $115,000, a very large sum of money, especially for the time.

Located along the Cross Island Parkway off Totten Avenue between Totten and 15th Roads in the Queens neighborhood of Bay Terrace, the area was called Willets Point until it was renamed for General Joseph Totten (1788-1864) who died in Washington, D.C. in 1864.

10. Fort Totten is a Popular Location for Film Shoots Fort Totten is a rare site in New York City with a mix of historic and abandoned structures unlike anywhere else. The unique settings make Fort Totten the perfect location for film shoots. Television shows that have filmed there included Daredevil, Gotham, Elementary, Persons of Interest, The Blacklist and The Americans.

Fort Totten was also the site of a recent publicity stunt for the final season of Game of Thrones. The park was one of six sites chosen, around the world, where an iron throne was placed. It was situated on the first level of the water battery under its dark, dungeon like row of stone arches.

Next, check out all the places you can discover behind the scenes as a member of our Untapped Cities Insiders club!