This week in New York City, gather under the Brooklyn Brige to hear from literary figures, go behind-the-scenes as a metal foundry, explore an abandoned hospital, see an outdoor movie and so much more. Here are our Untapped Picks for things to do: 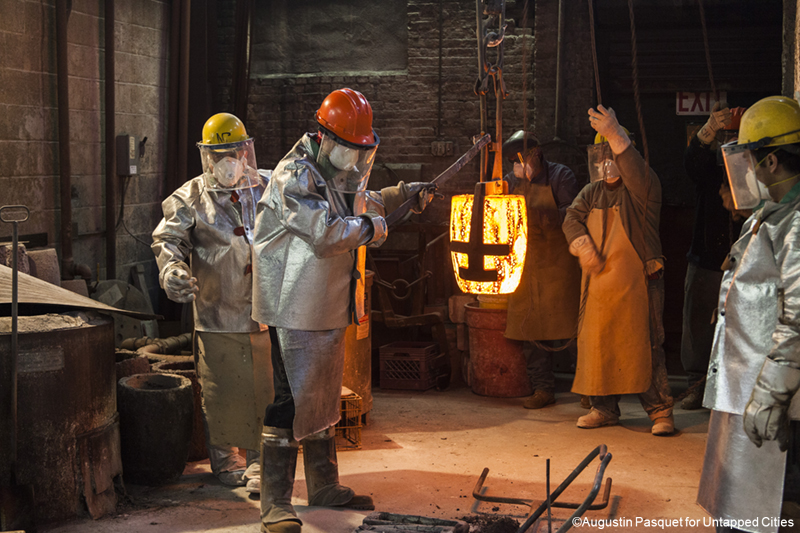 Watch a live bronze pouring at a Untapped Cities’ Behind-the-Scenes Tour of the Modern Art Foundry.The Modern Art Foundry specializes in casting bronze sculptures and has produced some of the most famous sculptures in New York City’s public spaces. On this tour led by third generation Foundry owner Jeffrey Spring, learn about the whole process of artistic fabrication—starting from when an artist comes up with a vision to when the final product is realized. If you are an Untapped Cities Insider, you can save $5 on tickets for this tour with the promo code found on our Untapped Cities Insider’s Facebook group and in the latest newsletter.

Explore the over 100-year-old contagious disease hospital on Ellis Island which has been abandoned since 1954 on a behind-the-scenes hard hat tour of the abandoned Ellis Island hospital with Untapped Cities. Be an urban explorer for the day and while learning about the history of the 29-building complex, see an exhibition by the world-renowned artist JR. Scattered throughout the hospital are life-sized historic photographs of Ellis Island immigrants. Visit the laundry building, kitchen, autopsy room and other usually off-limits places!

Tour the remnants of the World’s Fairs at Flushing Meadows-Corona Park on an expert led tour by Untapped Cities. Discover the unique souvenirs left behind by both the 1939-40 and 1964-65 World’s Fairs which brought countries from around the globe to Queens. From recognizable landmarks to hidden gems, see what remains from these historic events.

Walk Manhattan’s original coast line street grid as Untapped Cities Chief Experience Officer Justin Rivers reveals the remnants of Dutch New Amsterdam. As you retrace the history of New York City’s colonial past with a 1667 map in hand, discover vestiges of the city’s early history that you can still see and actually touch! See the remains of Manhattan’s first City Hal, discover the original Dutch fort, wind mill and battery and find out why Bowling Green has been so important in our city’s history.
Tour of The Remnants of Dutch New Amsterdam

Hear from authors and editors curated by WORD Bookstore at Books Beneath the Bridge. This summer literary series in Brooklyn Bridge Park at Pier 1 Granite Prospect features readings, discussions, signings, and much more. This evening, meet Jenn Pelly, the Contributing Editor at Pitchfork and author of The Raincoats and Rob Sheffield, a columnist for Rolling Stone since 1997 and best-selling author of five books.

Celebrate the 170th birthday of New York City poet Emma Lazarus, the woman who penned the poem inscribed at the base of the Statue of Liberty. On a twilight tour led by Annie Polland, Executive Director of the American Jewish Historical Society, you will pass by the gorgeous brownstone where she wrote her most famous poem, the art studios and publication houses of her literary friends, and the almost-hidden cemetery of her family’s congregation. The evening will end at the Center for Jewish History where you will see Emma Lazarus’s handwritten manuscript of The New Colossus and enjoy birthday cake! You can join this free celebration if you are an Untapped Cities Insider! Not an Insider yet? Become a member today to gain access to free behind-the-scenes tours and special events all year long! Already a member? Book here!

Be part of a free, uncensored, open mic, for all ages at First Draft in Herald Square. This weekly performance encourages artistic expression, experimentation, and development across all genres. Hosted by Urban Word NYC, this weekly event takes place every Tuesday through August 20th.

Take part in the Museum of the City of New York’s Uptown Bounce. Presented in partnership with El Museo del Barrio, this free summer block party celebrates East Harlem at the top of Museum Mile. The theme of July’s event is the Summer of ’69. From Woodstock to the first man on the moon, the Stonewall Riots to the launch of El Museo del Barrio, revisit the monumental summer of 1969 with music by Adam Riaz and Carlos Colon on bongos, timbales, clave, and more, decorate your own moon landing flag and gain free admission to the museum to check out select exhibitions after hours with guided tours. Summer drinks and snacks will be available for purchase from Amy’s Bread

Uncover the remnants of Penn Station, originally a grandiose Beaux-Arts structure designed by the renowned firm of McKim, Mead and White. It’s hard to image the former 20th century building today, but hidden within the modern transit hub are vestiges of the station’s past. As Penn undergoes even more changes to prepare it for commuters of the future, take a look back at its past.

Dive deep into the research of Michael Newton as he presents his findings on the lives of Alexander Hamilton, his friends, family, and colleagues at a lecture inside the historic Fraunces Tavern. Based on newly discovered legal testimonies from St. Croix, Newton explores the lingering questions of Hamilton’s birth date, places of residence, religion, parents, and more.

Enjoy and outdoor film screening in Brooklyn’s Prospect Park. This evening the feature presentation is Love and Basketball. The free Summer Movie Under the Stars program in the park is presented in partnership with Brooklyn’s Nitehawk Cinema and this year the series celebrates women’s voices in cinema by highlighting three fan-favorite films. Every screening is preceded by pre-movie activities and live music.

Crack open the secrets of New York City’s famous oysters at the Brooklyn Historical Society. Hear from a panel of experts as they discuss the important role these bivalves have played in New York City’s history from the time of the Lenape Indians to the present day. If you are an Untapped Cities Insider, you can join this event for free! Already a member? Book here!