There is a Preserved Fish buried in the New York City Marble Cemetery, but not the kind that has gills, swims in the ocean, and is served for dinner. This Fish was a human banker, although he did spend a good portion of his life at sea. Here is his tale (pun intended).

Preserved Fish was born in July 1766 in Portsmouth, Rhode Island to Isaac Fish and Ruth Grinnell. His Great-Great-Grandfather, Thomas Fish, settled in Portsmouth in 1643. “Preserved” was actually a relatively common name at the time, especially among Quakers (it meant ”preserved from sin” and was pronounced with three syllable). In fact, there were at least ten others in the Fish family who bore the name. But even in the 18th century, “Preserved Fish” made for a strange name. According to a folk story, Preserved Fish got his unusual name from a New Bedford fisherman who found him as an infant, floating in the wreckage of a boat. There is no truth to this story, but it became quite popular. It also went very well with his chosen career. After trying his hand at blacksmithing and farming, Fish found his calling at sea, working as a cabin boy aboard a whaling ship. By the age of twenty-one, he was made captain and commanded several vessels of his own. An erratic man, Preserved Fish never stayed in one place for very long and he tended to make impulsive decisions. Realizing that he could make more money by selling whale oil than he could by hunting it, Fish became a shipping merchant in New Bradford. In 1810 he partnered with Cornelius Grinnell to started the firm Fish & Grinnell. Five years later he set up shop on South Street in Manhattan.

A story in the New York Tribune on August 28, 1904 recounts a funny exchange between one of the men in Captain Fish’s crew and a revenue officer in New York Harbor: “‘What ship is that?’ ‘The Flying Fish.’ ‘Who’s your Captain?’ ‘Preserved Fish.’ ‘What’s your Cargo?’ ‘Pickled fish.’” The revenue officer, thinking he was being mocked, boarded the ship and demanded to speak to the captain. This story has been reprinted many times since then in all manner of books and newspapers. Sadly, however, the story is but another folktale, since The Flying Fish made its first run several years after Fish’s death, and he sold whale oil, not pickled fish. A print from the 17th century depicts a whale as an enormous fish-like monster with scales. Image via Wikimedia Commons.

Today, it might seem obvious that whale oil and pickled fish are two entirely different products, but this was not so in the 19th century. In fact, Maurice v. Judd, a New York City court case that was recently brought back into the public eye with the publication of Trying Leviathan in 2007, hinged on this very question. In 1818, Samuel Judd, a whale oil merchant, was brought to court for refusing to pay the tax on fish oil, on the grounds that a whale was not a fish. Judd could only find one whaler to testify to this end in court, and that was Captain Preserved Fish.

Although history and science were in his favor, Preserved Fish’s argument did not sway the court and Judd was found guilty. However, Fish’s involvement with Judd’s legal team did not end there: the New York City Marble Cemetery is small––taking up approximately one quarter of a city block and rarely opened to the public––and yet General Robert Bogardus, one of the lawyers arguing in defense of Judd, is buried in vault 42 in the same cemetery as Fish. Preserved Fish was buried in vault 75 in the New York City Marble Cemetery after his death in 1846. Vault 75 is one of only twenty-five vaults in the cemetery to have a memorial marker. The monument has not aged well; the inscription on its side is illegible and the marble urn has been separated from its base for at least a century. However, the cemetery’s donation box is a beautifully carved replica of the grave marker. Not only is it a very dignified portrayal of the now urn-less monument, it is also a way to preserve the memory of Preserved Fish. The donation box at the New York City Marble Cemetery, made to look like the Preserved Fish monument. 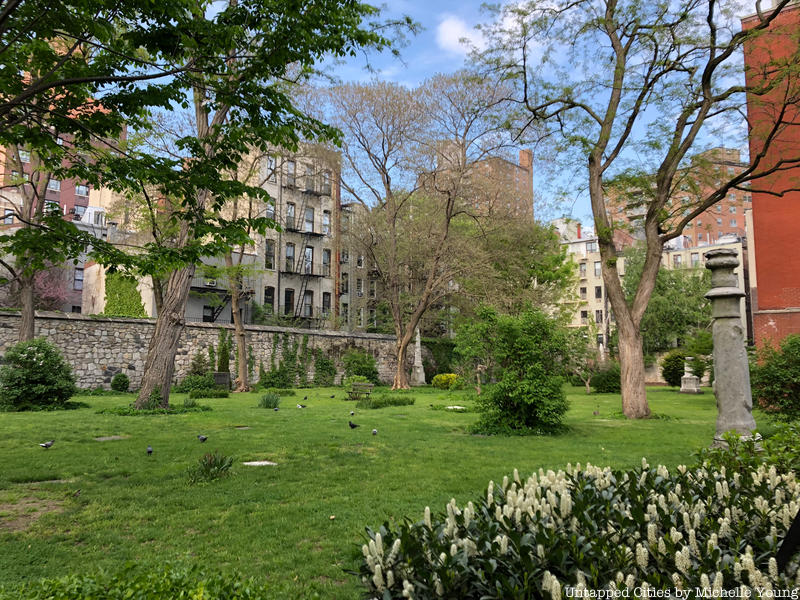 Want to visit Preserved Fish’s grave? The New York City Marble Cemetery is closed to the public for most of the year, but you can check the online schedule to see when the next Neighborhood Open Day is. It’s free! (And there are puppies.)

Next, check out The Top 10 Abandoned and Retired Boats in NYC (and One in New Jersey) and The 5 Weirdest Tombs and Mausoleums at Green-Wood Cemetery, Brooklyn.