“One entered the city like a god. One scuttles in now like a rat.” It’s the famous quote by art historian Vincent Scully about Penn Station. (Sticklers will know that his actual statement was a little longer, but the truncated version does quite the job). So what would Scully think about the latest renovation inside Penn Station? It’s looking to be quite dramatic, considering the low ceiling heights the hundreds of thousands of commuters have had to deal with for decades. This was particularly true in the very eclectic corner where the subway exit converges with McDonalds, the bar Tracks, and the mostly overlooked Maya Lin art installation, Eclipsed Time. Current work has revealed the dramatic barrel vault underbelly in the ceiling of Penn Station, but most exciting for us is the glimpse of original elements from the 1910 McKim, Mead & White station that’s a byproduct of the work.

According to Justin Rivers, who wrote a play about the demolition of Penn Station and who leads our long-running tour on the Remnants of Penn Station, a lot of columns and larger support beams in this area have been there since 1910. He has been referencing old photographs from Norman McGrath from the 1960s that show the same columns in place. If you look up, where the the panels of the coffered ceiling have been removed, you can see the original support beams as well. The bottom of the original taxi ramp along 33rd Street from the old Penn Station is now visible above the ticketing area, as revealed by the anonymous architect who commented on this article. Some of the 1910 support beams are also holding up this taxi ramp. You can see more remnants of this taxi ramp along one of the 1/2/3 subway exits that leads you next to Tracks — this portion has been visible all along, before the recent renovation work. Another great reveal is the cinderblocked wall that closed off a passageway which provided LIRR riders access to the southbound platform of the IRT trains today known as the 1/2/3 trains. Recently, the lights inside the passageway have been turned on, revealing Guastavino ceilings. The dark bricks are the cinderblocks that closed off IRT Passageway The most recent departure board has been removed and ticketing booths covered over for the renovation, but a sign shows that Tracks is still open during construction. White steel beams are temporarily in place, perhaps part of a structure that will enable the temporary relocation of the Maya Lin work and to continue the removal of the ceiling panels. In June, Aaron Donovan, MTA’s Deputy Communications Director told us, “We are in discussions with internationally renowned artist Maya Lin about the future of Eclipsed Time, which is located in an area that will be affected by this project.” What’s coming next? In place of the Maya Lin will be three escalators leading up to a new canopy entrance on 7th Avenue. The ticket booths will be back, with a digital signboard. The Andrew Leicester wall art, Ghost Series and Day and Night, which is an homage to the Adolph Weinman sculptures that once adorned the original Penn Station, will remain. 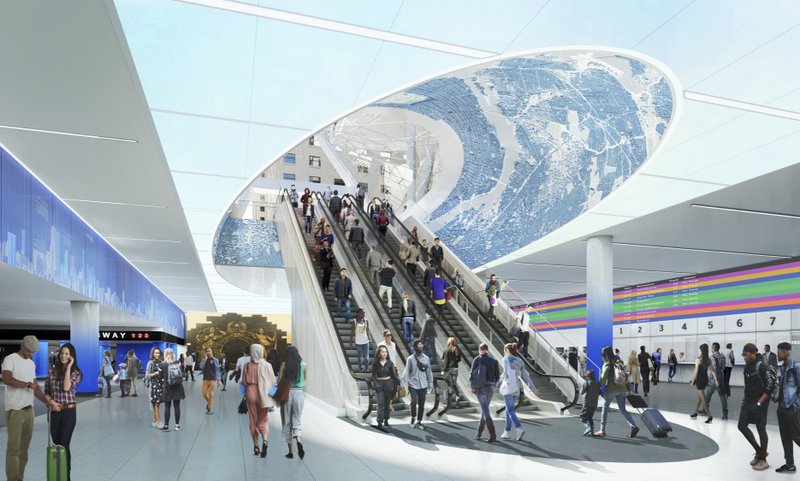 Join us on our upcoming tour of the Remnants of Penn Station, which will have these new additions thanks to the construction underway: