There are many things Brooklyn’s Pratt Institute is known for. A renown arts education program, a world-class modern art sculpture park, a landmarked steam plant…and its resident campus felines, the Pratt Cats. For decades, the cats were lovingly tended to by former Chief Engineer Conrad Milster, an avid collector of mechanical artifacts and feline aficionado who has been working at Pratt since 1958. There was even once an adorable entrance to the steam plant he made just for the Pratt Cats, labeled the “Feline Staff Entrance,” and the cats were known to make the engine room their playground (we mean, office).

In 2016, it was reported that Milster, now in his eighties, had been reassigned to another area in the facilities department, allegedly over controversy over his care of the numerous stray cats that lived (and stayed warm) in the Engine Room. He was even given an eviction notice from his campus housing, which was later rescinded by the school). Following this, the cats no longer roamed the steam plant, but throughout the campus you can still find little wooden shingled cat houses where people are invited to leave food, clearly an initiative continued following Milster’s long history of tending to the Pratt Cats. One sign says, “Thank you for feeding the cats” and encourages people to use the designated food bowls and to discard garbage in the trash. It also offers a facilities email address for anybody with questions or concerns regarding the campus felines. Milster has been allowed to remain in campus housing indefinitely and is available 24/7 to maintain the school’s antiquated heating system. As Pratt describes, the steam plant is the “oldest continuously-operating, privately-owned, steam-powered electrical generating plant in the country,” and was named a National Historical Mechanical Landmark by the American Society of Mechanical Engineers (ASME). The steam generators currently in use were made by Ames Iron Works and installed in 1900, when a campus extension required more energy. The steam plant continues to power all of the Pratt campus, sending heat, steam and hot water to the buildings. The wood paneling in the lower Engine Room dates to 1887 and incandescent lights still illuminate the space. 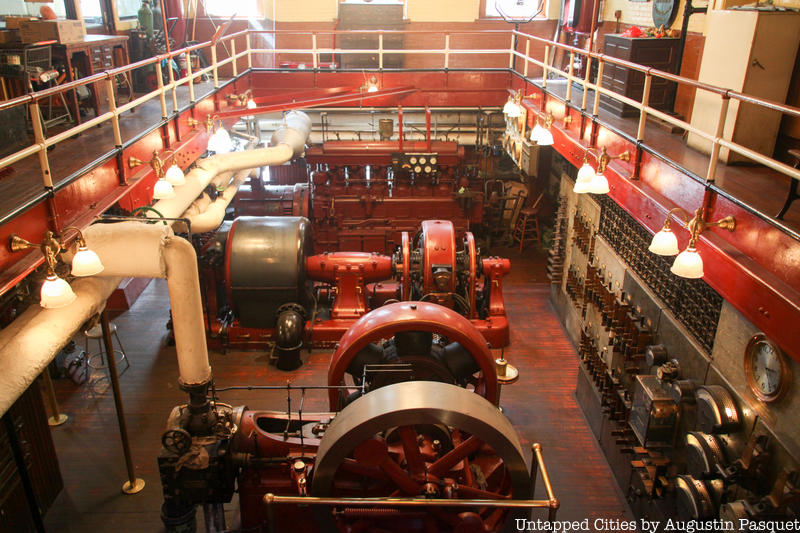 Milster, was one of only four chief engineers in the history of Pratt Institute and sees himself as the keeper of the power plant’s secrets – know-how on antiquated technologies he has garnered over the course of nearly sixty years. “You can be different and not be considered an oddball … I think about retirement and I’m sort of afraid to make that move … one of the difficulties is that when I leave, a lot of things are going to change,” Milster once said. “Is anybody going to give a damn about keeping the engines nice looking? Will any modern manager put up with incandescent lighting here? Who’s going to take care of the cats when I’m gone? I sort of fear for the things which I cherish being threatened.” Milster, in the meantime, has been inducted into the People’s Hall of Fame in New York and has showcased his beloved steam whistle collection at Staten Island Arts in St. George. You can learn more about the Pratt Institute Steam Plant in our guide book Secret Brooklyn: An Unusual Guide. You can get an autographed copy directly from us, or a non-autographed copy on Amazon!