﻿
It’s been a year and a half since there has been a new post on the website I Quant NY, run by Ben Wellington, a City & Regional Planning professor at the Pratt Institute and an analyst at the tech company Two Sigma. But the coronavirus has pulled I Quant NY from quasi retirement. Wellington mapped the 30% subway ridership drop on Friday, March 13th compared to the week before, and compared that to income data by neighborhood for New Yorkers. Wellington’s main research query, in his words: “I wondered if the drop in subway ridership was going to be larger in more affluent neighborhoods that have a higher proportion of employees that can telecommute?” 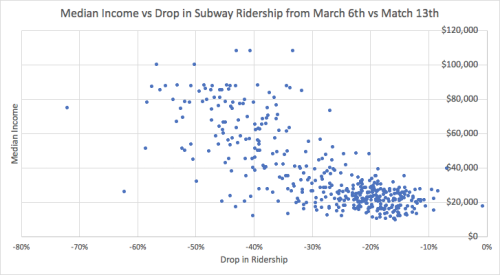 He writes in the post, “It becomes abundantly clear that as you go farther out – away from Manhattan – the drop in subway ridership is far less extreme.  Those generally are also less affluent neighborhoods.  To test that theory, I made a quick scatterplot which reveals a -77% correlation between the income of the census tract of the station, and the change in ridership. What’s troubling is that this may mean an additional health burden on those who may have less access to quality healthcare and are less likely to have paid sick time (or a security blanket for lost income).  The health risks of keeping the subway open are not evenly distributed among income groups.” Wellington used data from Subway Turnstile Data (via MTA), Median Income by Census Tract (via esri), and Geocoded Subway Locations (via Chris Wong) to do his analysis.
Since Friday, ridership has dropped even more significantly. A letter from MTA Chairman and CEO Chairman Patrick J. Foye sent to the New York Congressional Delegation yesterday cited these sobering statistics: “ridership has fallen approximately 60 percent on the subways, 49 percent on buses, 90 percent on Metro-North and 67 percent on Long Island Rail Road.” The MTA is requesting “substantial federal aid at the level of MTA revenue losses ($3.7 billion assuming ridership trends this week continue for six months) and COVID-19 expenses (approximately $300 million annualized) as we continue to respond to the coronavirus pandemic.” Foye concludes, “Time and again, New Yorkers have supported disaster relief for other states and Puerto Rico when they were devastated by natural disasters and other Acts of God. We are asking Congress to step up again and deliver for the system that is the lifeblood of New York City and the engine of the region’s economic future.”
Next, check out our daily coronavirus digest. Sign up for our daily and weekly newsletter here.