Supreme Court Justice Ruth Bader Ginsburg tributes have appeared throughout New York City in the week since her passing.

On the official end, just this past Tuesday, New York Mayor Bill de Blasio announced that the Brooklyn Municipal Building will be renamed in honor of the late Judge, a Brooklyn native. de Blasio stated in a press conference, “What an extraordinary opportunity to say to the people of Brooklyn, here’s one of your own who changed the world. Here’s someone of, and by, and for Brooklyn, and this city, who did the greatest things on the world stage. And that building will carry her name forevermore.” The day before, New York Governor Andrew M. Cuomo announced that a memorial and statue of Ruth Bader Ginsburg would be erected in Brooklyn by the state. He stated, “She was a daughter of Brooklyn and the embodiment of all that it means to be New York tough — yet her life was a testament that tough does not preclude acting with respect, grace, and dignity.” A tribute on the sidewalk of Ruth Bader Ginsburg’s childhood home in Midwood, Brooklyn

As we reported on Monday, Ginsburg’s childhood home had become a small de-facto memorial, with people taking a pilgrimage of sorts to the Midwood neighborhood to pay their respects at the house, the school Ginsburg attended in high school, and her synagogue. “Feminist hero—” one note left outside her house read, “may her memory be a revolution.” Additional tributes appeared all over the city. A banner reading “RIP RGB” was placed by the Women’s Rights Pioneers statue in Central Park. The statue, which was unveiled this past August, depicts Sojourner Truth, Elizabeth Cady Stanton and Susan B. Anthony, and is the first statue in Central Park to depict real life historical heroines (the only other statues of women in the Park depict the fictional characters Alice in Wonderland, Mother Goose, and Shakespeare’s Juliet). The banner was adorned with flowers, and a photograph as well as a popular drawing of Ginsburg were placed beside the banner. This photograph was captured by our very own Untapped New York Insider, photographer Klaus-Peter Statz. A guerrilla tribute appeared in the 50th Street subway station for a short time, transforming the number 50 into RU to spell “RUTH”. Another Insider, Mickey Blank who runs the popular social media channels New York Live with Mickey, was able to go into the temporarily closed subway station on Sunday to get a photograph.

Fearless Girl Gets a Collar

Earlier this week, the Fearless Girl statue outside the New York stock exchange donned Ginsburg’s signature lace collar. While the collar was removed by Monday, pictures of the Women’s Rights icon made their rounds on social media. The lace collar was replace by a collar of flowers. 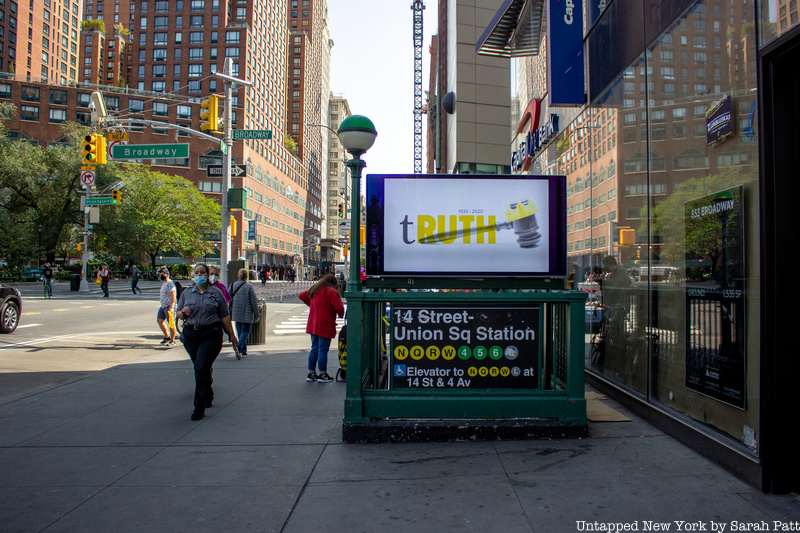 Advertisement boards above the New York subway entrances throughout the city featured a tribute to Ginsburg, reading “tRUTH”, alongside a gavel with the crown associated with her pop culture iconography and nickname, “the Notorious RBG” (an allusion to the rapper and fellow Brooklynite Biggie Smalls’ nickname, Notorious B.I.G.). The above picture shows a memorial written in chalk on 14th Street, saying “RIP RBG”, and “Love women’s rights”.

At the Metropolitan Museum of Art, Irving Penn’s portrait of Ruth Bader Ginsburg is now on display. The black and white photograph was taken in 1993 in Penn’s New York City studio the day before Ginsburg left for Washington D.C. to become a Supreme Court Justice. The portrait was a gift from the Irving Penn Foundation in 2017 and will be on display through October 6, 2020 in the Robert Wood Johnson, Jr. Gallery at The Met.

Starting October 1st, 2021 the New-York Historical Society will open the exhibit “Notorious RBG: The Life and Times of Ruth Bader Ginsburg featuring a robe and jabot from her Supreme Court wardrobe, official Supreme Court portraits, home movies, 3D re-imaginings of her childhood Brooklyn home, the Supreme Court bench, and the desk in her chambers, and more.

Our readers have also reported RBG initials scrolling on the Bloomberg tower. Have you seen more Ruth Bader Ginsburg tributes? Share them with us at [email protected]!