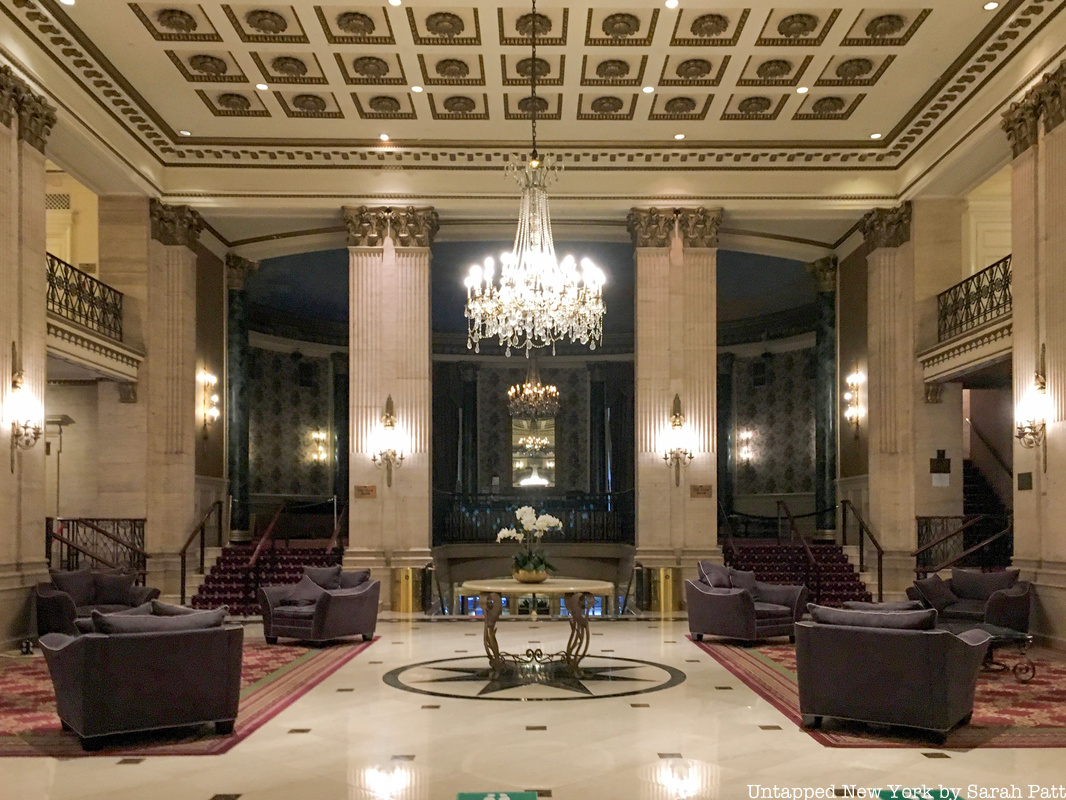 The Roosevelt Hotel in midtown Manhattan first welcomed its luxurious suites to guests on September 22, 1924, and has been an iconic symbol of New York City elegance ever since. With nearly 100 years of history, The Roosevelt has endured the Great Depression and World War II. Sadly, it appears that the historic gem will be unable to recover the latest global crisis: the coronavirus pandemic. The company which owns The Roosevelt Hotel has announced its official shutdown by the end of this year due to growing financial losses.

Situated 45 E 45th Street, The Roosevelt Hotel is only walking distance away from Grand Central Terminal and Central Park. The building’s location in the heart of Manhattan has made the hotel a hotspot for tourists. Additionally, its classic architecture has been the setting of many blockbuster films andshows such as The Irishman, Billions, and The French Connection. Although the Roosevelt Hotel will close its golden doors for good, it will not be forgotten. Here are ten secrets of the hotel to keep its memory alive, along with more information on what might happen to the hotel.

1. There is a Secret Passageway that Connects to Grand Central Terminal Below the Roosevelt Hotel There is a secret passageway that once linked The Roosevelt Hotel to Grand Central Terminal, three levels beneath the hotel. The underground pathway was a remnant part of Terminal City, a network of hotels, office buildings, and residencies that connect to New York City’s train system. Reed & Stem, accompanied by engineer William W. Wilgus, began designing Terminal City in 1902 with the vision of creating a commercial center that stretched the length of Park Avenue. However, the completion of Terminal City was abandoned with the emergence of World War II in 1939 and the vision was forgotten. A map of the tunnels around Terminal City and Grand Central. The Roosevelt Hotel is a block north of where this map ends so is not shown. Image from New York Public Library Digital Collection

This type of amenity offering direct access to transportation hubs was fairly common during this time period — the New Yorker Hotel had an underground passageway directly into Penn Station and the Woolworth Building‘s basement had access into the subway. Today, that tunnel has been closed off but according to Gothamist, is located “to the side the hotel’s lobby” above another tunnel in the basement that was once accessed via the shopping corridor one level below the lobby (in photo above).

2.The Roosevelt Hotel is Owned by Pakistan International Airlines The Roosevelt Hotel was originally established under the United Hotels Company of America, a chain of luxury hotels across the United States. In 1999, Pakistan International Airlines (PIA) bought the upscale hotel in midtown Manhattan for almost $37 million. The foreign company was eager to expand its business to a new market and increase profitability. The Roosevelt Hotel, located in the word’s largest financial district, was prime real estate for PIA’s diversification strategy.

However, The Roosevelt Hotel was not as financially successful as PIA had hoped. Over the past two decades, the hotel has suffered from steep expenses in structural repairs and debt servicing. The hospitality industry severely declined during the coronavirus, leaving PIA with no choice but to close the Roosevelt Hotel permanently. However, Pakistan International Airlines currently has no intention of selling the building. PIA is currently arranging a new economic plan to utilize the real estate. Air Marshal Arshad Malik, the CEO of Pakistan International Airlines, has said that the company may renovate or demolish the current 19- story structure and replace it with a new hotel that stretches 100 stories high.

The Roosevelt Hotel is not the only historic hotel in New York City owned by a foreign organization. For example, the Waldorf Astoria Hotel (currently undergoing conversion into condos and renovated hotel) is owned by Anbang Insurance Group, a Chinese holding company and The Pierre Hotel is owned by The Taj Hotel Resorts and Palaces from India.

3. The Hotel was Dedicated to President Theodore Roosevelt The Roosevelt Hotel was built in honor of America’s 26th president, Theodore Roosevelt, an emblematic figure of public service in the United States. George B. Post & Sons, the architects of the Roosevelt Hotel, hoped to reflect these ideals through the structure of the building. They envisioned the building to provide premium comfort and hospitality to it its visitors. Along with the conventional amenities offered at hotels, such as room service, fitness centers, and spas, the lower level and ground floor contain offerings that could be useful to guests: beauty parlors, shops, dressing room, and the like.

Playing on the Theodore Roosevelt connection, a children’s daycare which was on the 14th floor of The Roosevelt Hotel was nicknamed the “Teddy Bear Cave.” It was equipped with every toy and game imaginable to entertain the hotel’s young guests, including a wide collection of teddy bears. Like the hotel, the classic stuffed animals also inherited its name from President Theodore “Teddy” Roosevelt. The teddy bear was invented on November 14, 1902 after news spread that President Roosevelt refused to shoot a bear on a hunting trip in Mississippi.

3. The Roosevelt Hotel Once Had a Hospital 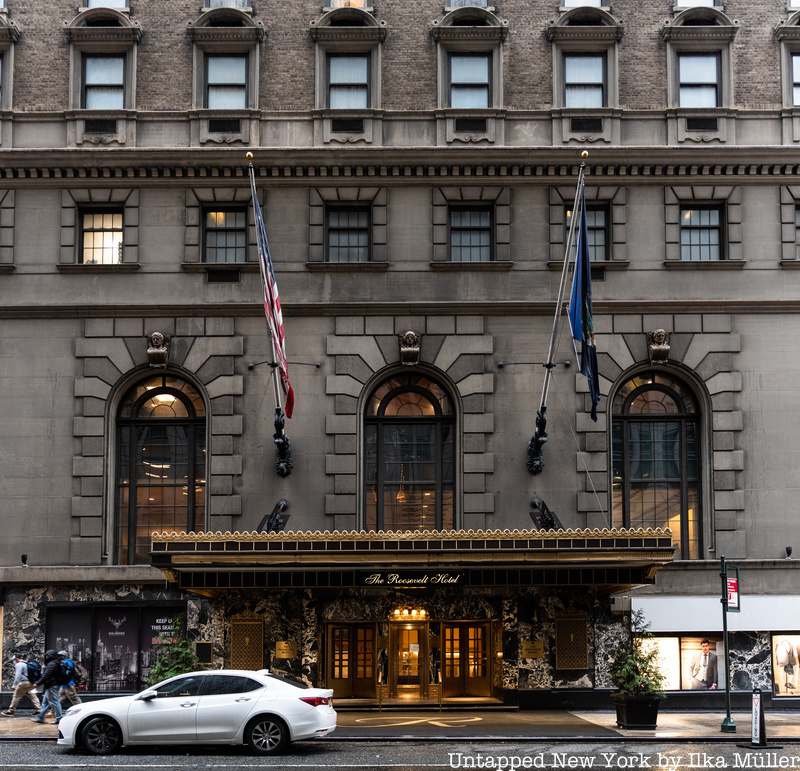 The Roosevelt Hotel provided medical care to its guests and was the first hotel to have in-house doctors. A hospital occupied the third floor and was prepped with exam and operating rooms, where certified physicians remained on call.

Eventually, the Roosevelt Hotel converted its the hospital into rooms. However, in light of the coronavirus pandemic, the hotel continues its commitment to public service by offering special rooms to COVID- 19 first responders.

6. Zoning Setback Were Used to Create Roof Gardens at the Roosevelt Hotel The Roosevelt Hotel’s roof gardens were a distinguishing and strategic feature of the establishment. The Roosevelt Hotel was the first major New York City hotel in construction since the 1916 Zoning Ordinance was enacted. The new mandate imposed height and setback limits on New York’s new skyscrapers in order to conserve natural light and air quality on city streets.

The architects of The Roosevelt Hotel were able to include rooftop gardens due a loophole in the zoning law to compensate for the architectural setbacks during the building’s construction. As a result, the Roosevelt Hotel created a unique amenity offered by no other hotel at the time. Silentvane fans were introduced by B.F. Sturtevant, America’s first fan company, only two years prior to the opening of The Roosevelt Hotel. These heavy-duty, industrial fans ventilated 40,746,000 cubic feet of per hour throughout the entire building.

Silentvane fans were so powerful that they were also used in the construction of the Holland Tunnel, the world’s first mechanically ventilated, submarine underpass for vehicles. The cutting-edge machinery was built with self-limiting horse power which helped to conserve energy and prevent motor exhaustion.

5. Murals by N.C. Wyeth and Arthur Crisp Were Commissioned for The Roosevelt Hotel The Roosevelt Hotel houses artwork by renowned painters N.C. Wyeth and Arthur Crisp. A three paneled mural by N.C. Wyeth, a 20th-century American painter, is the centerpiece of the Hendrick Hudson dining room. Wyeth titled his piece “Half Moon in the Hudson” in commemoration of the English explorer better known as Henry Hudson, whom the dining room was named after. The landscape depicts Hudson’s ship sailing on the Hudson River. Photo in public domain from Architects’ and builders’ magazine in 1924. Digital version located in the HathiTrust Library.

The grand Colonial Ballroom of the Roosevelt Hotel is decorated with paneled walls of ivory and gold, dazzling Tiffany chandeliers, and an ornate balcony which bordered the perimeter of the room. A mural depicting the fairytale of Cinderella encapsulates the whimsical ambience of the hall. The painting was done by Arthur Crisp, a distinguished Canadian painter who became very involved in the art scene of New York City during the early 20th Century. He studied at the Art Students League in 1903 and later co-founded many art organizations based in Manhattan such as the Allied Artists of America and the New York Water Color Society. Many architectural details of the Roosevelt Hotel were inspired by historic establishments across America. The inspiration buildings were meticulously selected by George B. Post & Sons, not only for their historic importance but also for their unique architectural attributes.

The beautiful paneled walls and fluted pilasters of the Main Dining Hall of the Roosevelt Hotel are inspired by those in New York’s City Hall. In addition, the elongated windows in the colonial banquet hall mimic those in Chase House in Annapolis, an exemplary building of Georgian architecture. The historic home was built in 1770 and was originally owned by Samuel Chase, one of the first signers of the Declaration of Independence.

10. The State-of-the-Art Kitchen of the Roosevelt Hotel The kitchen in the Roosevelt Hotel was every chef’s dream. It was equipped with the most cutting-edge machinery for the time, including 26 gas ranges, 12 charcoal broilers, 4 sterilizing dishwashers, 2 brick ovens that each weigh 85 tons, and an electric peeler.

The hotel’s kitchen was designed for maximum efficiency and practicality. Conventionally, hotel kitchens were tucked away in the basement, however, the Roosevelt Hotel showcased its modern cookery on its street level floor. This feature was convenient for waiters who saved the extra trip up and down a long stairway. Additionally, ingredients were categorized into their individual food groups and stored accordingly. Eight different refrigerators separated meat, smoked meat, cheese, fish, fruit, produce, butter and milk.

10. The Roosevelt Hotel had a Dog Kennel and Held Dog Runs To say that the Roosevelt Hotel was a dog-friendly establishment would be an understatement. On the 19th floor, a dog kennel was built with personal cages where lodgers could house their furry friends. Additionally, professional veterinarians were always on call at the hotel to care for the Roosevelt’s four legged guests. Eventually, the dog kennel was renovated into the Roosevelt Hotel’s modern rooftop lounge, Mad 46.

The Roosevelt Hotel was also a popular venue for many dog runs and symposiums in New York City. Most notably, the Dog Judges Association of America hosted an educational symposium there on the weekend leading up to the Annual Westminster Kennel Club Show. The seminar gave spectators a sneak peak of the contestants of the world renowned competition.

Join us for an upcoming tour of the Secrets of Grand Central Terminal:

Next, read Grand Central Terminal: Terminal City and its Hotels to find out what other New York City hotels that were a part of Terminal City’s design.