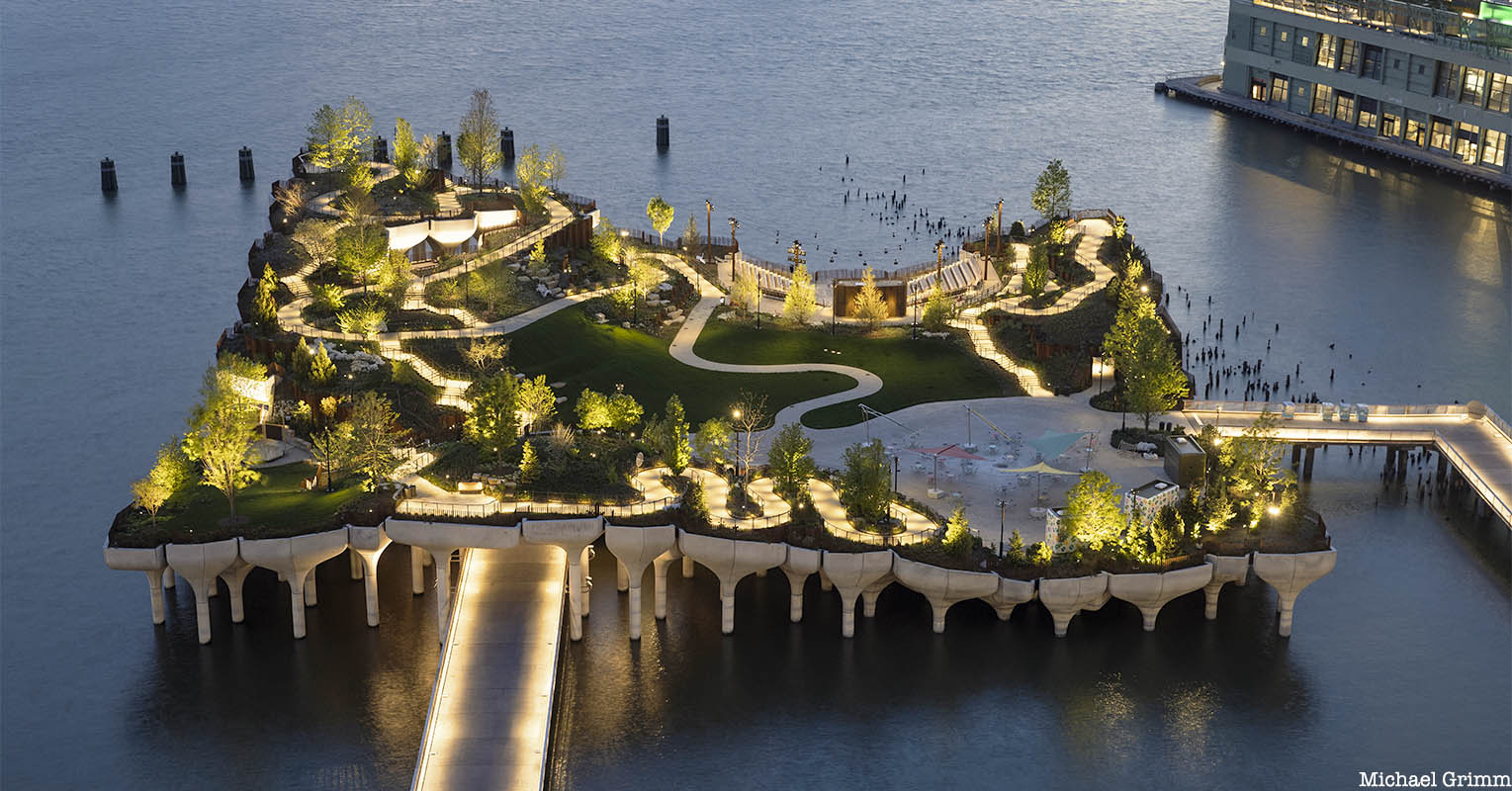 The wildly anticipated Little Island, the unique park that has been rising in the Hudson River designed by Thomas Heatherwick and Signe Nielson of the landscape architecture firm MNLA, is open! Located at 13th Street at the boundary between the Meatpacking District and Chelsea, Little Island is one of the first new parks to open since the pandemic began.

Little Island’s fascinating engineering, led by Arup, enables the park to rise on 280 organically-shaped concrete piloti on top of which sit 132 concrete “tulips.” The piloti mix in with the pilings of the former piers, which were retained as much as possible. The design provides for a literally elevated vantage point while on the park, as well as offer a variety of different spaces to experience. With 350 species of flowers, trees ands shrubs, the lush park has a lawn space known as “The Glade,” a 687-seat amphitheater (known as “The Amph”), and the provision of food and beverage vendors along a central plaza that contains seating.

To get Little Island ready for visitors, more than 66,000 bulbs and 114 trees have been planted, some which will eventually grow to sixty feet tall when mature. Nielson of MNLA says, ““Every time I come to Little Island, I’m struck by the same sense of wonder. This is an environment made to surprise. I wanted New Yorkers to feel delight and excitement around every turn from the moment they set foot here. When you enter from the concrete of the city, you’re immersed in this living, breathing ecosystem full of unexpected corners, hills and overlooks.”

The arts and cultural programming for Little Island is already robust, and in June, visitors can be treated to predominantly free or low-cost events from tap dancer and choreographer Ayodele Casel, playwright and award-winning director Tina Landau, actor, singer, and music director Michael McElroy, ating, musical, and storytelling group, PigPen Theatre Co. and more. There will also be free educational programming almost every day of the week.

While Little Island is located within Hudson River Park, which is itself built on state land, the funding for the new park came primarily from The Diller – von Furstenberg Family Foundation. Diller says, “I hope Little Island will serve as a whimsical oasis for everyone who visits, a place to wander around and be happily surprised at every turn, to lounge and graze the landscape, and to be entertained, educated and stimulated by our programming”

Little Island is built atop the remains of Pier 54 and Pier 55, which once served the glorious Cunard steamship lines. Cunard has a connection with almost all the major ships that came to or departed from New York City, some with unfortunate ends The RMS Lusitania left here in 1915, to be sunk by a German torpedo close to its destination. The Titanic was supposed to dock at neighboring Pier 59 but never made it, but the RMS Carpathia which rescued survivors did dock at Pier 54.

Little Island will be open from 6 AM to 1 AM, although there will be timed tickets issued between 12 PM and 8 PM. You can reserve these tickets on LittleIsland.org on in person at the park entrance.

Next, check out the Top 10 Secrets of Hudson River Park!