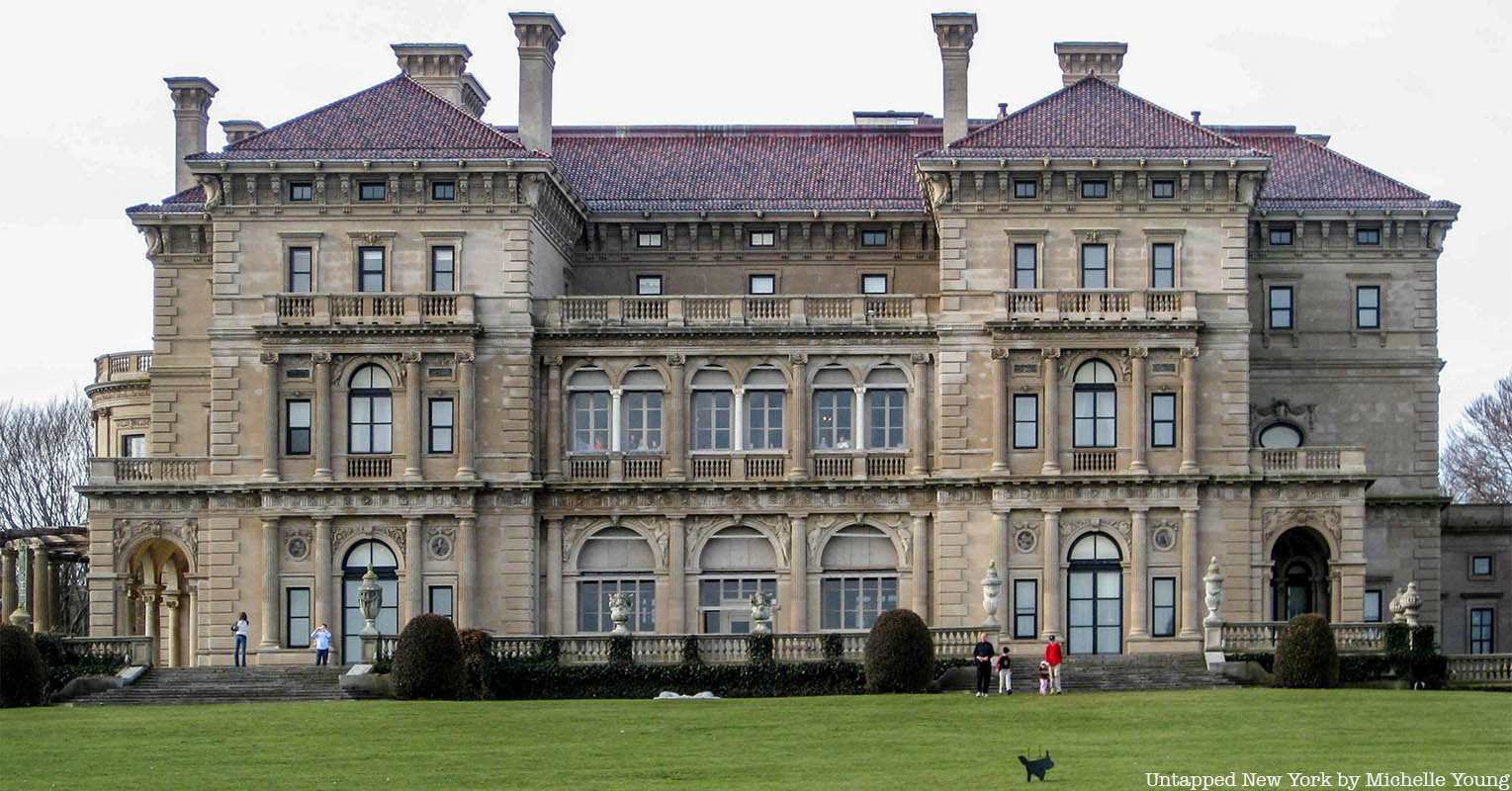 Anderson Cooper’s new book Vanderbilt: The Rise and Fall of an American Dynasty, co-written with historian and novelist Katherine Howe, chronicles his Vanderbilt ancestors, offering both stories personally connected to Cooper as well as the well-oiled sensational stories that many of our readers may already know. In the book, you’ll find the origin story of Cornelius Vanderbilt “the Commodore” who grew up on Staten Island, that of even earlier family members known as “van der Bilts” who settled in Flatbush, the famous rivalry between Mrs. Astor and Alva Erskine Smith Vanderbilt, the marriage of Alva’s daughter Consuelo to the Duke of Marlborough, the tragic death of Alfred Gwynne Vanderbilt aboard the Lusitania, the architecture of the elaborate Gilded Age mansions of the Vanderbilts, and more. The book does offer some unique perspectives, such as a racial analysis of Alva’s suffragist work, which we have not seen elsewhere.

The most intriguing story (in our opinion) of Vanderbilt appears in the prologue, covering the move of Gladys Vanderbilt, the great-granddaughter of Cornelius Vanderbilt II and his wife Alice, out of the Breakers in Newport, Rhode Island. Gladys would be the last Vanderbilt to live in the 70-room mansion, one of the Newport “cottages.” This event took place, incredibly, just in 2018 and is full of Vanderbilt-style drama which we will cover shortly. Newport also figures as a setting for another story, that of Alva Vanderbilt, who was first married to William K. Vanderbilt and then later to Oliver Belmont.

The Breakers was built in 1895 by Cornelius Vanderbilt II and his wife Alice, who is frequently referred to as “Alice of the Breakers.” A Vanderbilt lived at the Breakers from 1895 to 2018 and the mansion is described in the book as “the grandest and most opulent of Newport’s Gilded Age mansions.” It is Italianate in design, like a Roman palazzo, but, as Cooper and Howe write, “unlike the real palaces of the aristocrats of Europe on which it was modeled, The Breakers is new. Ish.”

The Breakers was designed by Richard Morris Hunt, a favorite architect of the Vanderbilts (Hunt also designed Alva Vanderbilt’s Fifth Avenue mansion and Marble House in Newport). The name comes from the waterfront setting, “named after the waves that crash ashore at the base of the cliffs behind the property,” describe Cooper and Howe, who also write that the “sheer size of The Breakers is hard to contemplate.” They state that it’s three times the size of the White House. It cost $7 million to build in 1895, about $220 million today.

Inside, there is a great hall with a tromp l’oeil sky painted above, a platinum-paneled morning room, a gilded ceiling music room, reception rooms for gentlemen and another for ladies, a Roman-style billiards room, a 34-person dining room, and a library whose fireplace comes from a French château.

Cornelius Vanderbilt II only lived for four years after the house was built, dying of a stroke at age 55. Alice continued to summer in the house until her death in 1934, at which point the house was given to Gladys Vanderbilt, who was then known as the Countess Gladys Széchényi following her marriage to a Hungarian count.

As one can imagine, The Breakers was a real estate property tough financial demands. There were extremely high maintenance costs for not only the house, but also for the thirteen acres of landscaped grounds, a stable, and two greenhouses. The $12.5 million ($340 million in today’s dollars) inherited by Gladys was not enough to keep up The Breakers, especially after Count Széchényi’s property and money were seized during World War II.

Gladys’ presence at the Breakers after 1948 was part of a $1 lease between her and the Preservation Society of Newport. She and her family moved into the third floor, installing a “small gate on the grand staircase, to stop any curious visitors from sneaking onto the floor, and converted a servant’s room into a kitchen,” explained Cooper and Howe.

The arrangement with the Preservation Society only went so far, however, because while it “helped the Countess by lowering taxes on the property, she was still responsible for paying them and for covering the cost of most major repairs,” write Cooper and Howe. The Countess died in 1965 and in 1972, her children donated most of the furniture to the Preservation Society and sold the house for $365,000 (about $2.3 million today).

Thereafter, Gladys’ daughter Sylvia Szápáry would be permitted to live on the third floor for the remainder of her life, along with her family, including her children Gladys and Paul. Cooper and Howe write that “Sylvie watched over the house with an eagle eye, trying to ensure it was cared for with love. She personally loaned the Preservation Society hundreds of family heirlooms and photographs so they could be put on display for visitors.” Her presence there became part of the secrets of the house, advertised by tour guides. No other Gilded Age mansion had descendants of the original families living in it and the Preservation Society wanted to keep capitalizing on that. As such, they allowed Gladys and Paul to continue living on the third floor even after their mother’s death.

Gladys followed in her mother’s footsteps in terms of serving as an unofficial guardian of the Breakers but “was at times critical of the way the Preservation Society was running things. She complained about the shrinking budgets for repairs and maintenance” write Cooper and Howe. Things came to a head in 2013 with the proposal to build a visitor center on the grounds, something Gladys staunchly opposed for aesthetic reasons. After this, Cooper and Howe write, she was told at a 2017 meeting that the third-floor was no longer safe for habitation and was not up to code (something Gladys had been saying for years “but her suggestions had fallen on deaf ears.”)

The Preservation Society stated that this was the result of a “year-long study by a preservation architect and an engineer” who jointly concluded that “the ventilation, electrical, and plumbing systems, while completely safe for museum use, were dangerously outdated for residential use, putting the structures and the collections at risk.” Elements on the upper floors would be decommissioned and the residency of the Vanderbilt family would be “voluntarily dismissed.” Gladys moved out by the end of the year but was permitted to return for the next few months to pack up her remaining things. As Cooper and Howe put it bluntly, Gladys “was being kicked out.”

Still, Gladys “spent her final hours in the Breakers mopping the floors, shutting off lights, closing doors… Before getting into the elevator that final time, she took one last look around the rooms where she had spent most of her life, now empty enough that her footsteps echoed over bare wood floors.”

In future chapters of Vanderbilt: The Rise and Fall of an American Dynasty, you will read about Newport society and how the Vanderbilts spent their leisure time at the Newport Casino, the tennis club that hosted the first U.S. Open and is now the Tennis Hall of Fame). You will learn about Alva Vanderbilt’s Newport mansion, Marble House, which spurred Alice to construct the Breakers, and how Howard Vanderbilt competed in the America’s Cup in Newport viewed by star-studded guests like Franklin D. Roosevelt.

The prologue of Vanderbilt provides a glimpse of what’s next in Vanderbilt: The Rise and Fall of an American Dynasty. The book is not intended to be a glorification of the Gilded Age, although some stories can’t help but be told from that angle due to how over-the-top they are. Cooper and Howe write, “If our country’s mythos is based on the belief that anyone can be rich if they have enough gumption, have enough grit—or, as we shall see, have enough ruthlessness—then, the Breakers is everything our culture tells us to want and promises we can have if only we are willing to work hard enough. It is arguably the most extreme expression of the loaded promises of the American Dream.”

Next, join us for our upcoming virtual talk Lost New York: Fifth Avenue Mansions. Read about the Vanderbilt Mansions in New York.