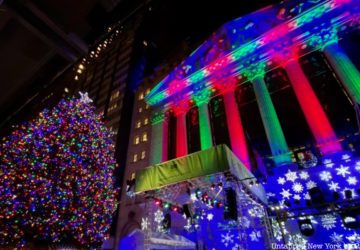 Last Thursday, September 29, the MTA announced a partnership between two legendary New York City sandwich institutions: Katz’s Delicatessen and Italian sandwich shop Alidoro, which began in SoHo in 1986. The shops have collaborated on the 1904 Sandwich, which takes its name from the year that New York City’s first subway opened to the public. The sandwich will be sold at four Manhattan locations of Alidoro through October 31.

The subway first opened on October 27, 1904, making this year the 118th anniversary. The first subway line, the Interborough Rapid Transit, ran from City Hall subway station to 145th Street, proclaiming “City Hall to Harlem in 15 minutes.” On opening day, the Mayor of New York City, George B. McClellan, was given the honorary duty of starting the first train, but instead of giving control to a motorman, he kept going to 103rd Street.

The opening attracted between six and seven thousand people, over 1,000 of whom were able to sneak into the train cars despite being barred from doing so. The first person to buy a ticket was a woman from Brooklyn, waiting in line for two hours. Surprisingly, the third person to purchase a ticket, Henry Barrett, lost 15 diamonds. And in typical New York fashion, there was a 20-minute subway delay after a fuse blew.

The opening featured a silver controller inscribed with the message; “Controller used by the Hon. George B. McClellan, Mayor of New York City, in starting the first train on the Rapid Transit Railroad from the City Hall station, New York, Thursday, Oct. 27, 1904. Presented by the Hon. George B. McClellan by August Belmont, President of the Interborough Rapid Transit Company.”

The 1904 Sandwich is wrapped in a Massimo Vignelli-inspired subway map design with a Katz’s and Alidoro logo and an illustration of Alidoro’s locations (Vignelli designed the New York City subway map in 1972). They cost $14, though the MTA Away lunchbox deal for $17 includes a cookie and a bag of chips. The MTA also randomly placed $50 OMNY prizes for subway and bus fares inside 75 lunch boxes. The four Alidoro locations offering the sandwiches are Bryant Park, Rockefeller Plaza, Moynihan Train Hall, and The Hugh.

“New York City subways and buses are as iconic as deli sandwiches,” said New York City Transit President Richard Davey. “Today, we celebrate our transit and culinary history with the introduction of the ‘1904’. Today’s transit-inspired sandwich is the proverbial icing on the cake, as we continue to improve service reliability, [and] offer new fare options and promotions to welcome back riders to the MTA.”

Next, check out the Top 10 Secrets of the Opening Day of the NYC Subway!